When kin of slaves and owner meet 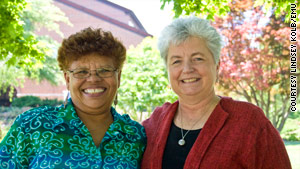 Betty and Phoebe Kilby first met in February 2007. They are linked by a slave past.
STORY HIGHLIGHTS

(CNN) -- Betty Kilby was gripped with apprehension. Descendants of the white family that enslaved her kin were coming to dinner.

She scrolled through a mental Rolodex of relatives who might flip out. Her brothers had already asked her: Why would you want to meet the family of those who held our loved ones in bondage?

"When they ask that question," she says, "you kind of scratch your head. It makes sense. Why would you want to do that?"

As the dinner neared, she thought of her grandparents, who had toiled in the fields of rural Rappahannock County, Virginia. "Out of all the crazy things I've done," she thought, "this has got to be the craziest."

Betty had faced down racism, and white people, before. She was one of the first African-Americans to attend a desegregated school in Virginia. She'd even written a book about it.

But this dinner, though weeks in the making, would test her in a new way.

'Knew we were connected'

It was a surprise for Phoebe Kilby to learn that her family owned slaves. It wasn't something her father ever mentioned.

Video: From slavery to wealth

But Phoebe had read newspaper articles about African-American Kilbys living in Virginia, near the farm where her father grew up. Her curiosity sent her on a search of old courthouse records -- deeds, wills, census documents.

And when she read Betty Kilby's book, the puzzle fell together.

"I just knew we were connected," Phoebe said.

But how does the descendant of a slave owner reach out?

On January 15, 2007, she sat down at her computer and fired off an e-mail to Betty. It was Martin Luther King Jr. Day.

"My name is Phoebe Kilby, and I am white," the note began.

"Martin Luther King had 'a dream that ... the sons of former slaves and slave owners will be able to sit down together at the table of Brotherhood.' Perhaps, we as daughters can contribute to fulfilling that dream."

Days went by. No response.

"At first, I thought she doesn't want to talk to me."

It turned out a computer glitch meant Betty never received the e-mail. Two weeks after she sent the first note, Phoebe tried again.

The two spoke briefly by phone and made a plan to meet.

Betty was mega-busy on a book tour, giving speeches about love and brotherhood. At schools, black children would ask, "How come you don't hate white people?"

"I tell them hate is like taking poison. The only person you hurt is yourself."

Without much thought, Betty invited Phoebe to the family dinner. "I thought, what kind of hypocrite would I be if I could not sit down at the table of brotherhood with Phoebe?"

Still, she and others in her family couldn't help but wonder about Phoebe's motives. Were the descendants of the slave master coming to steal from them one last time?

An explosion of genealogical Web sites -- from RootsWeb to AfriGeneas to Family Search -- has helped African-Americans find information about their ancestors with the click of a mouse.

Descendants of slaves and slave owners stumble upon each other while researching their families. Sometimes, descendants of slave masters can help shed light on the past through family documents that still aren't public.

Hate is like taking poison. The only person you hurt is yourself.
--Betty Kilby

Such topics were taboo in the past and, to some degree, still are. But time has helped make them easier to discuss.

"When you meet someone whose ancestors are connected to yours through slavery, you become connected with that history in a very personal way," said Susan Hutchison, the community coordinator for Coming to the Table, a program sponsored by the Center for Justice and Peacebuilding at Eastern Mennonite University in Virginia.

The program, begun in 2005, encourages descendants of slaves and slave owners to discuss history, connection, healing and action.

"So much of the damage of slavery has come from the disconnection between African-Americans and European-Americans," Hutchison said. "To build a connection out of a history where there's been so much painful disconnection is particularly powerful.

"We've found that building connections is a critical piece of what's needed for healing on a personal level, on a family level and on a national level."

She said the internet has made a huge difference in helping bring both sides together, although it's still not an everyday occurrence.

It's even rarer for descendants of slaves and slave owners to become friends. Many draw the line at e-mail and phone contact.

"It's quite rare for people to find each other and very intentionally talk about the real history of the time and the social forces around slavery and what came after slavery," Hutchison said.

Why is that important?

"There's an opportunity to create a new legacy that is more honest and whole," she said. "And out of these new relationships, we're finding people are able to take action."

Hutchison descends from an array of Southern slaveholders and has traveled the South to meet descendants of the people her family enslaved. Her experience spurred her to help create Coming to the Table. The project helps people research family history and grapple with what it means to have ancestors who were slaves or slaveholders. But it's not just for people who have a direct family connection to slavery.

"We are all still impacted by this history," Hutchison said. "There are still big racial gaps -- in access to education, jobs, health care, just to name a few. All of us, all our communities, have stories about race. Coming to the Table tries to create a safe space for those stories to come out, so we can learn about each other and move forward together."

Betty and Phoebe Kilby are only 10 years apart in age. But their lives took divergent paths. Betty grew up in the segregated South, and everything that came with it. Her father, James Wilson Kilby, was a sharecropper who was robbed of a high school education in Rappahannock County. He vowed that his children would get educated.

He sued the Warren County board of education, following the landmark Supreme Court case Brown vs. Board of Education of Topeka. On February 18, 1959, Betty and 22 others were the first African-Americans to attend Warren County High School. Whites boycotted the school for the first seven months of integration.

As a plaintiff in the case, Betty Kilby's family became the target of extreme hatred.

"The minute anybody knew you were a Kilby, that opened you up to harassment," she says.

The night before Betty first attended the school, she was washing dishes in the kitchen when shots rang out. "I was so scared, I passed out. My mother thought I was shot."

Gunshots were routinely fired at her home. The family dog was poisoned, she says.

By September 1959, about 500 white students had returned to school. That's when it got really ugly. Daily, the black students were pelted by spitballs. Racial epithets were hurled. Some would sniff and hold their nose up in the air "as if I stank," Betty says.

At restaurants, when she saw white families praying before dinner, she thought, "Are they real? Do they really love God like we do?"

While Betty struggled through her high school years, Phoebe Kilby was just a young child. The girls' fathers had grown up less than a mile from each other on two separate farms. (They're not sure if their dads knew each other.)

Phoebe's dad received his high school diploma, went to college and became a doctor. Phoebe grew up in Baltimore, where she attended a private girls' school with other white children.

"Right there," she says, "you see a difference in access to education. The trajectories of the families are just totally different."

"Those kinds of things become more stark when you realize you have a connection to that family. I think that's a value of coming to the table. It becomes apparent to you what kind of advantages you had because you're white."

The table of brotherhood

Betty and Phoebe bubble with enthusiasm when they talk about that evening in February 2007, when they first met.

Despite her initial apprehension, Betty says a unique friendship emerged. When Phoebe, along with her sister, joined Betty's family for dinner that night, Betty says she received an unexpected surprise.

"She was coming back to say, 'What can I do to make amends?' " Betty recalls. "The last thing we had thought about was a [white] Kilby wanting to make amends."

We can reach out and work on past wrongs, and repair those harms.
--Phoebe Kilby
RELATED TOPICS

Betty roars with laughter. She admits black families have misperceptions about white families, especially the descendants of slave owners. Black families, she says, believe most whites "won't talk about this, because you don't have the courage."

"You begin to break down those barriers as you're able to sit down at the table and talk about the difficult things," she says. "You take the color of that person's skin off, and you start to look at that person's heart."

Adds Phoebe: "We don't talk to each other very much across racial lines in America. This has given me an opportunity to really develop friendships with people I feel like are my family. It just happens we're a different race."

Phoebe says it started out awkwardly in those first few minutes when they met. One of Betty's brothers was awfully skeptical, she says, but he "warmed up a little bit." After dinner, the families attended a screening of a documentary about Betty's life. Afterward, there was a question-and-answer session. Phoebe stood up, introduced herself and spoke of her twisted connection to the past.

"Just having a white person get up and acknowledge there were harms done in the past seemed to be meaningful," she says.

Betty says it went a long way to helping heal wounds. "I'm grateful to have met Phoebe," she says.

One of Betty's brothers remains unswayed. "He just thinks it's absolutely crazy." Phoebe's father died in 1986. She never talked about racial issues with him, but she admits, "I don't think he would feel very good about this."

Both women now travel the country telling their story as part of the "Coming To the Table" program.

"I feel compelled to make that connection with the descendants of slaves," Phoebe says. "It makes me feel like I have an opportunity to make amends for the past in some small way. We can reach out and work on past wrongs, and repair those harms. That's just important to me as a person."

Betty agrees. "There's heart in that. There's love in that," she says. "That is my door to heaven, being able to love everybody today."