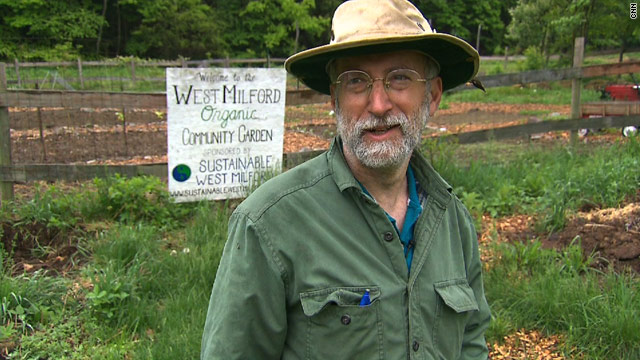 His backyard garden produced a bountiful harvest with a surplus of spaghetti squash, melons, pumpkins, tomatoes, peppers and cucumbers for his family. At the end of the season, Oppenheimer had 40 pounds of excess fresh produce -- and nowhere to take it.

"Nobody wanted more," he said. "My wife wouldn't let me bring any more in the house, and I didn't want it wasted."

So Oppenheimer took the produce to a local food pantry at a battered-women's shelter. When he dropped off the food, he was struck by the response he got from the shelter worker.

"[She] thanked me profusely, and as I left she said, 'Now we can have something fresh to eat,' " Oppenheimer recalled. "That stuck with me because I remember walking away thinking, 'What? They have canned stuff only all the time?' "

Video: From your garden to their table
RELATED TOPICS

The experience ultimately led Oppenheimer, 57, to create a way for gardeners across the country to easily share their excess produce with hungry families in their communities.

In 2008, Oppenheimer became the director of the West Milford Community Garden in West Milford, New Jersey. He learned that toward the end of the summer, plots were often abandoned and good food was sometimes left to rot.

He tried to find a list of his town's local food pantries online where the extra produce could be donated. A Google search showed the nearest food pantry was in another town, 25 miles away -- when in fact there were six food pantries in Oppenheimer's town of West Milford.

Oppenheimer knew he had stumbled upon a gap in information that could rescue fresh produce from a wasteful end and potentially save lives.

"I realized that if I'm having this problem as a gardener, then other people across the country must be having the exact same problem," he said. "I got up the next morning, and I went on the internet, and I grabbed the domain of AmpleHarvest.org."

He reached out to food pantries across the country through social networking, food banks, master gardeners, faith organizations and other groups to encourage them to sign up for inclusion in his database of food pantries. Oppenheimer enlisted the help of Web designers and in May 2009, AmpleHarvest.org was rolled out nationally.

The free online resource enables food pantries to register and be listed in a central nationwide directory, and makes it possible for American gardeners to easily find the local pantries where they can donate extra produce.

"The country is loaded with gardeners who have more food than they can possibly themselves use," Oppenheimer said. "AmpleHarvest.org gives them the ability to easily, quickly get that food to somebody who genuinely, really needs it."

According to the Department of Agriculture, nearly 15 percent of American households have difficulty meeting their food needs. Those who rely on food pantries are often surviving on canned and processed foods. But with 41 million U.S. households growing fruits and vegetables, according to the National Gardening Association, Oppenheimer is helping green-thumbed Americans share healthier options with their neighbors in need.

"Whether it's a hanging tomato plant off your apartment terrace, or a garden ... or whether you run a farm, we all have food that's left behind," Oppenheimer said. "That's the food that ... we can get into the system to help diminish hunger in the country."

Nearly 2,000 food pantries across the United States are now registered on the site.

"Me and my wife are trying to have my son be as healthy as possible. [At] the grocery store, the food's expensive, and it's hard to buy the healthier foods because we don't always have the money," Lesko said.

"It would be nice to see if more people could farm at home and bring whatever extra they have for the pantry."

Although Oppenheimer cannot track the amount of produce that has been donated to food pantries, he said he's received messages from numerous pantries and clients across the country who've been given food as a result of AmpleHarvest.org. He also has heard from growers who continue to donate because the website led them to local pantries.

And as the food pantries continue to see results, Oppenheimer hopes his efforts will turn into a lifelong commitment for the gardeners.

"The point is to get it so that people will find it's easy and convenient to get in the car and to drop off that bag of tomatoes or carrots or apples, and then to make it a part of their regular routine, hopefully for the rest of their gardening lives."

Want to get involved? Check out the AmpleHarvest.org website and see how to help.