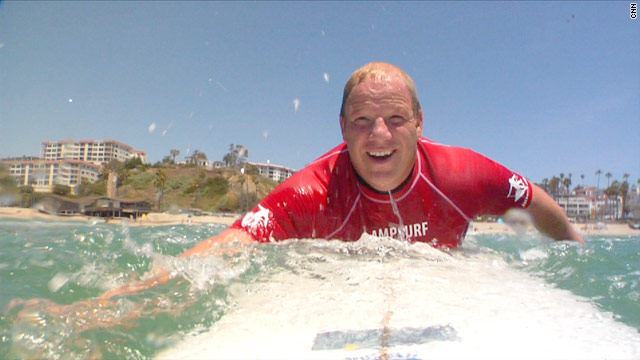 San Clemente, California (CNN) -- Dana Cummings survived two tours of combat duty as a Marine in the first Gulf War without injury. But 10 years later, he lost a leg in a car crash.

A divorced father of three, Cummings said he was abandoned by his girlfriend and denied physical rehabilitation by his insurance. Realizing he needed to be strong for himself and his children, he began an intense workout regimen in the hospital -- then found his own brand of rehab in an unlikely place: a surfboard.

"I wanted to prove that I was whole, and one of the ways to do that was to learn to surf," Cummings said. "When you become disabled, you feel trapped. And when I felt the first breath of freedom, of riding that wave, I was like, 'This is so good, so inspiring.' I wanted to share that feeling that I had with others."

In 2003, he helped create the Association of Amputee Surfers, or AmpSurf. The nonprofit, volunteer-run organization is dedicated to teaching people with disabilities, most of them veterans, how to surf -- for free.

"We want to inspire them to move on and just be active and live full lives," said Cummings, 40. "We want them to walk away with that empowerment, that self-confidence that they can do whatever they set their mind to."

Cummings co-founded AmpSurf with his prosthetist and two other amputees, including Rodney Roller, the man who taught Cummings how to surf. Since 2008, Cummings has been running the organization.

AmpSurf is open to anyone with any disability, including spinal cord injuries, blindness, post-traumatic stress disorder and autism. Seventy percent of participants are veterans.

The group holds one clinic per month at a beach on the California coast. Participants are provided with food, surfboards, wetsuits, sunscreen and towels. They're paired with one or more volunteers or instructors based on their ability to surf, as well as by disability. Before they get into the water, they receive "dry land" instruction on how to get up on the board.

But the clinics aren't just about surfing, Cummings said.

"We bring people together to feed off each other and swap stories about what they're going through," he said. "For me, this was the biggest mental rehab I could have ever had."

Anthony Davis is one vet who's benefited from the program. A retired Navy rescue swimmer, Davis, 28, was paralyzed from the waist down as a result of a car accident.

"I remember waking up in the VA hospital in Seattle and not being able to move my legs," he said.

Doctors told Davis he had a 99 percent chance of never walking again and a 60 percent chance he'd never get out of his wheelchair. But Davis ignored the statistics and was soon standing -- with Cummings' assistance -- on a surfboard.

"Surfing makes me feel like I'm flying," Davis said. "I feel like I don't need my legs. It changed my life by making me feel a lot stronger and more confident."

A year later, Davis taught himself how to walk again and attends as many AmpSurf clinics as possible. He also continues to inspire those around him, including Cummings.

"I'm missing my leg and there are days I don't want to get out of bed," Cummings said. "But I can't imagine being told you'll never walk again, and then having the strength and internal drive to actually do it. Anthony's amazing."

More than 300 people have taken part in AmpSurf clinics, including Brian Ruhe, 35, who lost both legs above the knee when he was 18.

"A lot of us have amputations or some sort of paraplegia, quadriplegia, are stuck in wheelchairs or stuck to their device, and just to be part of nature, to be free to move with the water, it's a freeing experience," Ruhe said.

Each year, AmpSurf sponsors a group of disabled veterans and non-vets in Operation Restoration, a weeklong clinic that offers surfing and other sporting events. Funding for all of AmpSurf's activities comes from individual donations and local businesses.

For Cummings, AmpSurf will always be about more than just surfing; it's about happiness, not just for the participants, but for him and his volunteers.

"I always tell the volunteers, 'You're going to get 10 times more out of this than the person you help today, because everybody feeds off each other. You can't help but be happy,'" he said.

"None of us get paid, but we come back month after month, year after year, because it feels good to give back and to help somebody."

Want to get involved? Check out the AmpSurf website and see how to help.