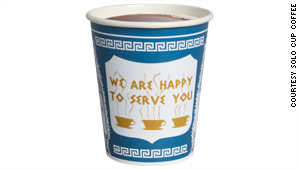 The cup was designed to honor the owners of Greek diners who bought the paper coffee cups.
STORY HIGHLIGHTS

Before there was a Starbucks on every corner, New Yorkers would stop into one of the city's many Greek-owned diners for their morning caffeine. They would most likely exit clutching Buck's famous "Anthora Cup" filled with steaming coffee.

The cup has made appearances in New York City TV shows and movies, from "Law and Order", to Al Pacino's 1989 film "Sea of Love." One of Buck's daughters, Beverly Eisenoff, remembers sitting in the movie theater when she saw the cup stretched across the screen, "That's my dad's cup!" she yelled.

Angie Gorman, Director of Communications at Solo Cup Co., told CNN that Solo now owns Sherri Cup Co., where Buck first designed the cup in the early 1960s. The cup can still be custom ordered, but demand for the cup tapered off in the new century and Solo decided to officially discontinue the product from its catalog in 2006.

Born Laszlo Büch in present-day Ukraine in 1922, Buck arrived in America a refugee of Nazi Germany after World War II. He lost his parents to the Nazis, but he survived Auschwitz and Buchenwald. His daughter describes him as a self-made man, "He came here with nothing, no parents, no job, no savings. He had nothing."

But that didn't stop him. "Because of what he suffered in the concentration camps he was somebody who really believed in respecting humanity, really was about loving your neighbor and respecting your neighbor," his daughter said.

It was this respect that led him to spend hours in the library, researching Greek history and design. He wanted to honor the heritage of the Greek diner owners who bought his products and gave him his livelihood.

His design features three steaming golden cups of coffee, and the essential phrase 'We are happy to serve you" bordered by two Greek Amphora vases. Buck's children say his Eastern European accent transformed "Amphora" to "Anthora," and that's how it's known today.

When Buck retired in 1992, the company printed 10,000 cups for him and his family with a slight change. The cups said, "It was our pleasure to serve you," as a farewell to the man who left his mark on the city that never sleeps.

When talking with CNN about the outpouring of attention and affection for her father following his death, Eisenoff described her father as incredibly humble, and impossible to buy presents for. "New York became his home when he left his home," she says. "This is the best present to give my father. What he did his whole life matters to the city that became his home."

Leslie Buck is survived by his wife, Ella, Eisenoff and another daughter, Linda Rush, his son Robert, his brother Eugene and four grandchildren.