Antwone Fisher: What guys need to know to be men 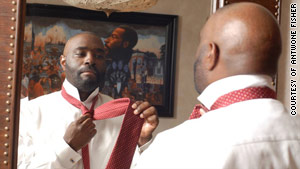 Editor's note: Antwone Fisher, who lives in California with his wife and two daughters, is scheduled to participate Sunday in a panel discussion at the Los Angeles Times Festival of Books.

"I think a lot of people complain about young people and the way they dress or behave, but for some of them, no one ever explained those things," Fisher said.

Fisher, on whose life the 2002 movie "Antwone Fisher" is based, relays tips in his new book, "A Boy Should Know How to Tie a Tie: And Other Lessons for Succeeding in Life."

Fisher, 50, draws on his experiences from a neglectful foster home and his transformation in the Navy to write a book that's part memoir, part instruction manual. CNN spoke with him about it.

CNN: Are young males hungering for someone to show them how to be a man?

Antwone Fisher: I think so. ... Some of it I learned while I was in the Navy, and a lot of young people are not going to have the opportunity to join an organization like that, one that's going to build you up from the bottom and teach you all those things. Also, there are a lot of single parents who don't know some of the things that I included in the book. There might be a mother who has a couple of boys and doesn't have a husband or a brother to teach them how to shave or how to tie a tie.

It's important to learn when you're young, and not as you go, because you may lose an opportunity. [For example,] if you presented yourself and stuck out your hand for a handshake, your nails were so long that they dug into the palms of the other person's hand. I have to make sure my hands are presentable, because they're almost like your calling card.

CNN: Is society guilty of not making men the way it should?

Fisher: I think everybody is so busy trying to make it. There's so much to know and so much to learn. A childhood is not actually long enough to learn all the things you need to know before you reach young adulthood. I'm always still learning.

CNN: Some of your other advice includes how to choose dress shoes and pair them with socks, iron a shirt, develop a life plan and put a budget together. How did you go about deciding the topics that you felt young men needed to learn?

Fisher: I chose some of the topics that I had problems with -- and not just me but some of my friends. If there was another decade between your 20s and your 30s, where you could get up to speed on some of these things, your 30s and 40s might be a lot smoother.

CNN: Your advice on hygiene goes beyond just making sure you shower. You give specific advice, for example, about taking care of yourself well with an excellent shave: one with shaving oil, self-mixed shaving cream, a shaving mug and hot, damp towels. You say a proper, ritualistic shave is a highlight of manhood. How so?

It was enjoyable, and it had a little scent to it. It's just like anything you do when put your effort into it before you present yourself, and you're clean, well-trimmed.

Even if no one mentions it, you know you put the time in to present yourself as best you can. It being part of manhood, you had better enjoy [shaving], because you're going to be doing it for the rest of your life. And I think knowing how to do it and having nice products to help you with it, it makes it enjoyable. And when you use these products, it makes you feel like you're worth it.

CNN: Should more youths consider joining the military, and would they be better prepared for manhood if they joined?

Fisher: It worked for me. I don't think everyone is cut out for military life, because it is a really strict way of life. But if a young person did want to join -- let's say the Navy -- I think they would get that boost of learning as I did. But I don't know if there are other organizations that teach young men how to shave or how to dress and how to prepare themselves for the future. I don't know any other organization that actually does that.

In the Navy, you're like a captive of theirs. It's not like you can walk away and say, "This is too much to learn." You have to learn it. So I felt that I had learned so much, and some of the things that I learned I wanted to share because a lot of it are really simple things that I think people, if someone would bring them up, would go, "Oh, yeah, I can do that."

Fisher: When I was in the Navy, we had to wear the admiral-style uniform, and we had to wear a necktie and learn how to tie a half-Windsor. I had watched my foster father, who was a preacher, tie a tie for all my young life. But he never taught me how to tie it.

I assumed I knew how to tie because I saw him doing it. But once I had to actually tie it in the Navy and I couldn't do it, I was so frustrated and upset. I felt that he should have taught me how to tie a tie. I also didn't realize that you were supposed to thread the belt through the belt loops around your waist in a certain direction. I learned that in boot camp. And there is a way that your shirt is supposed to be tucked into your pants. I didn't realize that until I joined the Navy, either.

I also think young people should be able to dress the way they want, as long as they don't offend proper society, because you're not in the world by yourself.

I don't really wear suits all the time. Generally, it's only when I work or speak to audiences. But I know when I'm going to represent myself to the public or at speaking engagements, I have to make sure I have the proper attire. So I make sure I always have the right shoes and the right belt and everything that goes with it, because at that time, I'm not only dressing for myself, I'm dressing for people who have to sit there and look at me for an hour.