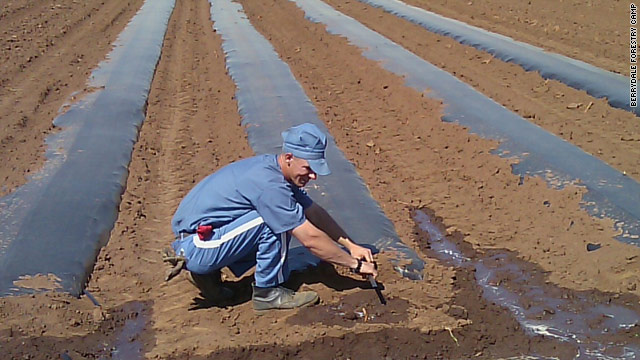 Some Florida prison inmates learn about farming and get to share the fresh food they help grow.
STORY HIGHLIGHTS
RELATED TOPICS

(CNN) -- For a crop of Florida inmates, green acres is the place to be.

Five days a week, a vanload of inmates in blue jumpsuits makes a 15-minute trip to the University of Florida's West Florida Research and Education Center from Berrydale Forestry Camp, a low-risk satellite facility of Century Correctional Institution.

The program took root in 2009, when the 650-acre publicly funded research farm faced some harsh state budget cuts. Short on hands and strapped for cash, the research center decided to reach out to an unlikely source: the Florida Department of Corrections, said William Wendt, the Alternative Crops Program manager at the research farm.

As for the inmates, they most certainly reap what they sow. In the winter, it's collards, cabbage and turnips. Spring brings snap peas, sweet corn and tomatoes.

"In the past, people would give away their vegetables. Now they ask each other if they're going to eat their greens," said Justin Jacobs, a 28-year old inmate at Berrydale.

Before farming, Jacobs worked in the facility's kitchen, where he said most of the produce he handled came in frozen or canned form.

The produce grown serves double duty: for consumption in Northwest Florida correctional facilities and for the university's agricultural research.

"We're developing this not just as a cost savings program but as a re-entry program for the inmates," said Maj. Mark Barber, chief of Berrydale security.

"The farm teaches these inmates work ethic and skills that will help them hold jobs upon their release," Halley added.

The research farm ultimately wants to make the agricultural experience a certificate program so that when the nonviolent offenders are released back into society, they have something to show potential, often skeptical, employers.

And as it turns out, even the "students" can teach the teachers a thing or two about agriculture. An inmate doing time for growing marijuana had quite expansive knowledge on the hydroponics of a greenhouse, Wendt jokingly confessed.