Have doctorate, will work for Census
STORY HIGHLIGHTS

Los Angeles, California (CNN) -- It is twilight at Dodger Stadium, and a small army of U.S. Census workers has gathered in the vast empty parking lot.

Their mission this spring evening is to find and count the tens of thousands of homeless people who call Los Angeles home.

Christina Coffey is one of the newly minted census workers who will be hitting the streets and gathering information. She will be helping the homeless men and women living on skid row and in shelters to fill out their census forms.

Not everyone she meets will be agreeable, but Coffee says she doesn't mind.

"I am very happy to have this job," said the 28-year-old Los Angeles native.

"I come from a great background," she said. "I have a good résumé and a good education." 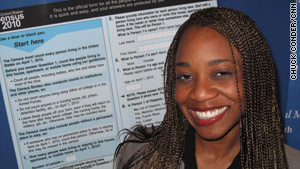 Buashie Amatokwu had trouble finding work after earning her doctorate. She says her census job is "my calling."

But in the current economic climate, that didn't translate into a job.

Coffey has been unemployed for the past two years, one of the millions affected by the recession. The nation's unemployment rate still stands at 9.7 percent after some modest job gains this year.

The economy shed 8.4 million jobs from March 2008 to April 2009. But it has actually been a boon to the people responsible for compiling the 2010 census.

The U.S. Census Bureau is hiring 1.2 million people to gather information for its once-a-decade headcount of the U.S. population.

"We have noticed, with the economy the way it is, the caliber of person we have recruited for this census is remarkably better than we have seen in the past," said James Christie, director of operations for the the U.S. census' Western region.

Christie believes that this year's highly educated work force could make this census the most accurate in history.

"We have people with advanced degrees working as census-takers," he said. "They may be overqualified, but they are glad to be working."

Buashie Amatokwu is one of those "overqualified" workers. She has a doctorate in African history from Temple University. Now, her skills are directed toward getting an accurate count of African immigrants, residents from the Caribbean and African-American citizens.

They may be overqualified, but they are glad to be working.
--James Christie, regional census director
RELATED TOPICS

After college, Amatokwu had trouble finding employment, so she worked for a while selling financial planning services. But she wasn't satisfied as a saleswoman.

Her job as a census worker has given her a new sense of direction, she said.

"I like to say that I am called to serve," Amatokwu said. "That is my calling."

But her census job will end June 1. Nevertheless, she believes the experience has prepared her to move forward.

It's a lesson that Amatokwu hopes will translate into employment in politics or the diplomatic field.

Amatokwu's census job has lasted about 18 months, but most of the 1.2 million census jobs will last only a few weeks.

Even though the employment is short term, Coffey sums up the attitude of most of these temporary employees:

"I'm highly appreciative of every hour I am working and every paycheck."