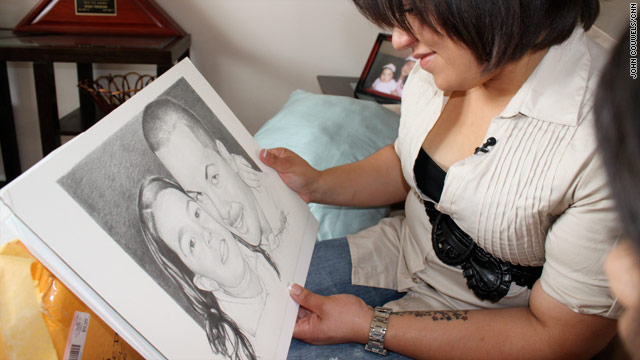 Astrid Santini looks at a portrait of her daughter and her late husband, killed in Iraq.
STORY HIGHLIGHTS

"I do the eyes first so I get this connection with the face," he said. "I am pretty exhausted after a picture. Just try staring at a photograph for five hours without any distractions."

Reagan, a professional artist for 40 years, is known for his vivid etchings of politicians, celebrities and athletes.

Today, he has a new subject: fallen members of the military.

It all started three years ago when the wife of a Navy corpsman who was killed in Iraq asked Reagan to draw her late husband.

Reagan insisted on doing the portrait for free. Then he had a realization.

"I looked at my wife and told her what happened and said, 'Now we need to do them all,' " Reagan remembered.

"Doing them all" meant closing his art gallery and reaching out to the families of fallen service members.

Most of the troops Reagan draws are U.S. service members killed in Iraq and Afghanistan. He has recently started drawing portraits for family members of British and Canadian troops killed in those conflicts.

Slowly, word among military families spread and requests for portraits began pouring in. Reagan, a Vietnam veteran, grew to know the faces of hundreds of troops lost to war. 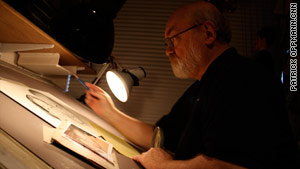 For 12 hours a day, Michael Reagan works on portraits of fallen military personnel. So far, he's done more than 2,000.

"It breaks my heart to see young people who have died," he said. "It makes me proud that I get a place in their life."

It is a punishing regimen. Before Reagan puts pencil to paper, he researches the person by reading letters from his or her family and studying the pictures and videos that the family has provided.

A portrait takes between five and six hours, not including the research. He tries to complete two each day. So far, Reagan has done more than 2,000 portraits.

Keeping up with the requests wears down Reagan, 62, at a time he thought he would be getting ready to retire. A small volunteer group of military families and friends helps him coordinate the portraits and has set up a foundation to bear some of the costs involved.

Drawing celebrities and athletes allowed him to make a good living, he said, but with the military portraits, Reagan says he has found his "true calling." 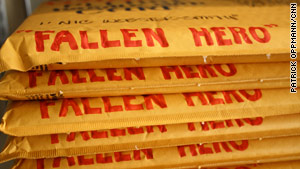 Envelopes carrying Reagan's portraits are sent, free of charge, to the families of those killed in Iraq and Afghanistan.

"It's what I have assumed as my task."

More than 1,000 U.S. military personnel have been killed in Afghanistan, and more than 4,300 have died in Iraq.

The portraits have a profound impact on the families that defies a simple explanation.

"It's not for me, it's for my daughter," Astrid Santini said shortly after receiving Reagan's portrait of her daughter and late husband. "For her to have in her house someday."

Sgt. Ed Santini was killed by a roadside bomb in Baghdad, Iraq, in 2007, leaving behind Astrid and their 4-year-old daughter, Nayomi.

The day the portrait arrived in the mail, Santini was overwhelmed with emotion.

"It's magical," she said while gazing at the picture with Nayomi. "How can one picture make him look alive? Just for one moment, I thought he was here." 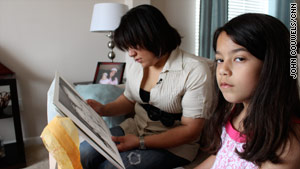 Reagan sketched a portrait of Nayomi Santini and her father. Nayomi was 4 when her dad was killed in Iraq.

Reagan said the impact of his portraits transcends the politics and controversy surrounding war. He is reminded of that every Tuesday when Joe Colgan pulls into Reagan's driveway in a truck decorated with bumper stickers calling for the pullout of troops from Iraq.

Reagan, on the other hand, supported the removal of Iraqi leader Saddam Hussein.

Despite their political differences, the two men are friends and close collaborators on the portrait project. Every week, Colgan drives 70 miles round trip to pick up and mail Reagan's portraits. He carries with him the framed portrait that Reagan drew of Colgan's son Ben, an Army lieutenant killed by a bombing in Iraq in 2003.

"Somehow, the spirit of the person comes through, the soul of the person is right there with the drawing," Colgan said. "I can't explain it."

Reagan also can't explain the effect of his portraits or why a successful artist would suddenly decide to begin drawing pictures of an intensely painful subject, free of charge.

It is a journey, he says, that began years ago with his own experience on the battlefield as a young Marine in Vietnam.

"I love drawing pictures, I have always loved it," Reagan said. "In Vietnam, a lot of the pictures I drew came home when the soldiers and Marines didn't."

He said his personal war experience changed his perspective on life.

"I think anybody who served in combat knows what that is: You come home with the nightmares that never go away," Reagan said. "Doing this is finally allowing me to come home."