A 'dude' explains why salad is 'man food' 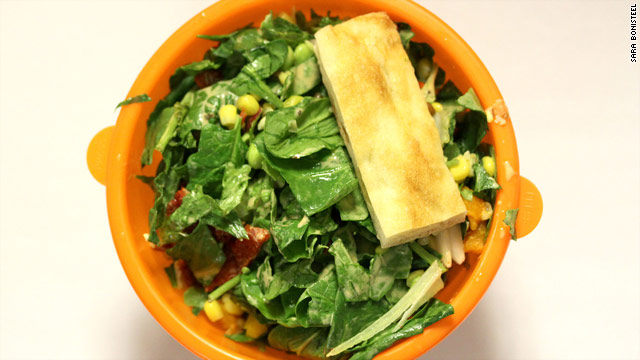 Attention, guys: Embrace the salad. It can be your friend.
STORY HIGHLIGHTS
RELATED TOPICS

Editor's note: John DeVore is a former editor at Maxim magazine and maxim.com and former host of "The DeVore and Diana Show" on Sirius XM radio. He currently offers man-centric perspectives as a columnist at Guyspeak.com and TheFrisky.com. He's a lifelong food freak and yo-yo dieter and speaks fluent "dude."

(CNN) -- Real men eat salads. I know this because I am a dude. Right now, in my fridge, I have five bottles of hot sauce, a jar of Cheez Whiz and half a pack of hot dogs. But recently I went to lunch with a couple of buds, and I ordered a salad. I ordered it hard.

It was a basic frissée salad with bacon, shallots and a poached egg, tossed in a light vinaigrette. Frissée is a curly, toothsome leaf, bitter enough to balance bacon and egg but still possessed of a pleasant spring.

My friends laughed at me. They pointed. One ordered a burger, the other fried calamari. I was chastised for not eating "man food."

For those of you who aren't familiar with this gender normative term, "man food" is food that you'd imagine a lumberjack or a cowboy or a Viking would eat. Towers of butter-soaked pancakes. Pots of napalm-hot chili. Meat on a bone.

I don't need any fancy, goopy dressings compromising my vegetables. (What does a ranch actually taste like, anyway?) Sometimes, I might throw some almonds or walnuts up in there. I've been known to be down with blueberries and mandarin oranges. I like bacon or grilled chicken on occasion. I am not a fan of unnecessary carbs like croutons. And then there are those moments I go crazy and get a frissée freakin' salad.

I didn't evolve without help. There was a time where, if I cut myself shaving, I'd bleed sausage gravy. My heart squeezed more than it pumped. And I also grew what I call "fat wings."

Luckily, the woman I was dating at that time didn't like any of those things. Being able to sit in a bathtub full of buffalo wings is every dude's birthright, but I eventually learned that being attractive for your significant other is also pretty manly.

My girlfriend was a smart woman and didn't bring up my devolving into a human biscuit. What she did was announce that we were going to save money so that Saturday nights, we could go to the local barbecue joint and destroy some cow with our faces.

Obviously, my first thought was, "Aww, she wants me to help her lose weight." So I humored her. She came home from the supermarket with a stack of plastic disposable containers. In each, she put one potential salad ingredient. Not only the ones that would become my favorite but kidney beans, green peppers, corn and pepperoni slices.

She created a mini-salad bar in our fridge. It was easy, and I was told I could eat as much as I wanted. This became my lunch and occasional dinner.

You know what? We saved money. I lost weight. Gained energy. And my girlfriend and I, well, let's just say we had the whoopee time.

I kept this up this salad-centric diet for months. My friends would come over to watch a fight or brawl on the PlayStation, and I'd meet them at the door with a salad in my hand.

The landlord would need my help with some drywall; I'd put my salad down.

At work, I'd articulate corporate strategy during lunch meetings spearing cucumbers in my lucky bowl of awesome salad. I made eating salad sexy. I made it macho, macho.

Is it rabbit food? Friend, if it's rabbit food, then that rabbit is the size of a ferocious bear.

My friends poked fun at me as I munched on my fancy salad. It was tasty. I love how the warm yolk from the poached egg lightly coated the frissée, adding a dimension of hardiness to a dish with such leafy bounce. And the bacon chunks added just the right amount of fatty salt, more sturdy ballast. I wiped my mouth.

We were out celebrating one guy's birthday. The other guy, an old friend from college, was "in-between gigs." It had been another tough year. "Salad is not man food," they mocked. Oh, but it is. I ordered a final round of beers. Then I picked up the check.

Are salads manly? What is the manliest salad? Are you the sort of guy who wouldn't touch a salad if a gun was put to his head? Tell us in the comments whether you think salads can count as "man food."