TV chefs whose shows burned to a crisp 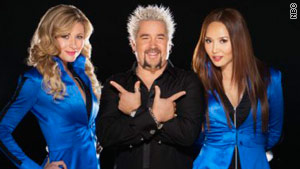 Self-proclaimed "Kulinary Gangsta" (no, seriously -- he has a tattoo and everything) and Food Network phenom Guy Fieri failed to catch fire with audiences in his prime-time major network debut.

Variety reports that NBC's "Minute to Win It" -- a distinctly non-"kulinary" game show that challenges competitors to master stunts like one-handed tissue-box emptying and re-stacking plastic cups -- "didn't put up great overall numbers from 7 to 9 p.m." on Sunday but rallied slightly against other networks' programming at the 8:30 p.m. mark.

Lukewarm ratings might not relegate most shows to the trash bin, but given how this one underperformed after being so heavily promoted via pricey Winter Olympics commercial breaks, popular food blogs like "Eater" are already predicting the show's cancellation.

But it's not just hard out there for a "gangsta"; over the past decade, several notable chefs failed to bring the sizzle to the network spotlight. With NBC set to take another gamble on Chef Bobby Flay's upcoming reality show, "America's Next Great Restaurant," network execs might wish to take a second look at a few star turns that flamed out fast.

"No Reservations" host and leather-jacket aficionado Anthony Bourdain steamed up bookstore shelves nationwide with his restaurant tell-all "Kitchen Confidential: Adventures in the Culinary Underbelly" in 2000.

FOX's sitcom incarnation, featuring a defanged "Jack Bourdain," played by Bradley Cooper, replated the book's sex-drugs-and-rock-'n'-roll soul as a sanitized snack of wacky kitchen hijinks and one-note characters. After four episodes, the network put it in the deep freeze, airing the remaining nine episodes online and outside the U.S.

In 2001, New Orleans' Emeril Lagasse starred in a self-titled sitcom set behind the scenes at a fictional cooking show. Bereft of his essential "BAM!" and "Kick it up a notch" catchphrases and scripted as a watered-down version of his charismatic bayou-blasting Food Network persona, Lagasse and co-star Robert Urich muddled their way through 11 bland, critically panned episodes before NBC pulled the plug.

Long before he danced with the stars and shilled for Bertolli, Rocco DiSpirito was an honest-to-goodness chef at an acclaimed Manhattan restaurant called Union Pacific.

This rude, raw, reality show, however, was not set there. Rather, "The Restaurant" -- airing on NBC in 2003-04 -- documented DiSpirito's fraught relationship with restaurateur Jeffrey Chodorow as they made nasty hash opening a joint venture called "Rocco's."

The show, stuffed to the gills with product placements, featured frequent clashes between front- and back-of-house staffs, diners, servers (hired on-air from a pool of more than 2,000 fame-starved applicants), and DiSpirito and everyone but his sainted mother, who made the restaurant's signature meatballs.

While "The Restaurant" made it to a very short second season, a painfully public legal conflict between DiSpirito and Chodorow shuttered the restaurant and the show. Rocco has never cooked in a restaurant again.

"Hell's Kitchen (UK)" host and British tabloid staple Marco Pierre White popped across the pond to helm this competitive restaurant reality show for NBC in the spring of 2009.

Though mentorship of Gordon Ramsay and Mario Batali and a spicy biography entitled "The Devil in the Kitchen" established him as a culinary cult favorite, as the show's host and head judge, White swapped his legendary scorching temper (he once allegedly set a young chef on fire for complaining about the kitchen's temperature) for a tone so chill, it sent viewers nodding into their sorbet.

After three episodes, NBC placed the show on a back burner, releasing the remainder of the episodes online.