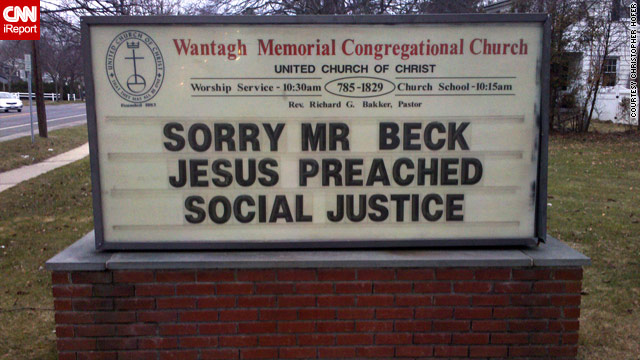 (CNN) -- An evangelical leader is calling for a boycott of Glenn Beck's television show and challenging the Fox News personality to a public debate after Beck vilified churches that preach economic and social justice.

Wallis says Beck compared those churches to Communists and Nazis.

Wallis says at least 20,000 people have already responded to his call to boycott Beck. He says Beck is confusing his personal philosophy with the Bible.

"He wants us to leave our churches, but we should leave him," Wallis says of Beck. "When your political philosophy is to consistently favor the rich over the poor, you don't want to hear about economic justice."

Wallis says he wants to go on Beck's show to challenge the contention that churches shouldn't preach economic and social justice.

Social and economic justice is at the heart of Jesus' message, Wallis says.

"He's afraid of being challenged on his silly caricatures," Wallis says. "Glenn Beck talks a lot when he doesn't have someone to dialogue with. Is he willing to talk with someone who he doesn't agree with?"

Beck did not answer numerous requests for an interview.

Glenn Beck talks a lot when he doesn't have someone to dialogue with
--The Rev. Jim Wallis

But a prominent evangelical leader says he, too, is suspicious of churches that preach economic and social justice.

Jerry Falwell Jr., president of Liberty University, a Christian college in Virginia, says Jesus wasn't interested in politics. He says that those pastors who preach economic and social justice "are trying to twist the gospel to say the gospel supported socialism."

Falwell says that Jesus believed that individuals, not governments, should help the poor.

"If we all did as Jesus did when he helped the poor, we wouldn't need the government," says Falwell, the son of the late evangelical leader, the Rev. Jerry Falwell.

What is economic and social justice?

The term "economic and social justice" is not easy to define. It has different meanings for different people.

If we all did as Jesus did when he helped the poor, we wouldn't need the government
--Jerry Falwell Jr.
RELATED TOPICS

For other Christians, practicing economic and social justice also means trying to change the conditions that cause people to be poor or unemployed. The Rev. Martin Luther King Jr. subscribed to this definition of biblical justice.

"For a long time, Southern Baptists and evangelicals were so focused on the return of Christ that what was happening in the real world was almost incidental," says Duren, who blogs at martyduren.com.

But within the last two decades, Duren says, more evangelical Christians have come to believe that the Bible calls for economic and social justice.

William Wilberforce, for example, is a 19th century British politician who helped abolish the slave trade in his country. He is now regarded as a hero for some evangelicals because he applied his faith to the economic and social justice issues of his day, Duren says.

Did Jesus preach about social and economic justice?

The Bible cares about social and economic justice, Duren says.

"The Old Testament is replete with examples of God threatening to judge a nation because of a lack of justice or carrying out that threat of judgment against a nation,'' Duren says.

He believes Beck was wrong to tell Christians that they shouldn't belong to churches that seek justice.

"If I had any authority at Fox News right now, Glenn Beck would be seeking economic justice," Duren says. 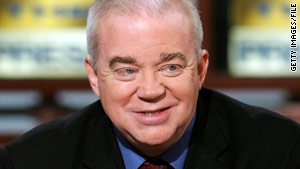 The Rev. Jim Wallis is the president of Sojourners, a network of Christians.

That concern for justice is what helped convert him, says Wallis, president of Sojourners. Wallis, who counts King as one of his faith role models, says the Bible isn't just concerned with feeding the poor -- it's concerned about the conditions that create the poor.

Wallis also evoked the Christians who fought against slavery as well as civil rights activists.

"The Bible just didn't say take care of the victim -- it talks about justice," says Wallis, who is the author of "Rediscovering Values: On Wall Street, Main Street and Your Street."