How to drive your waiter crazy 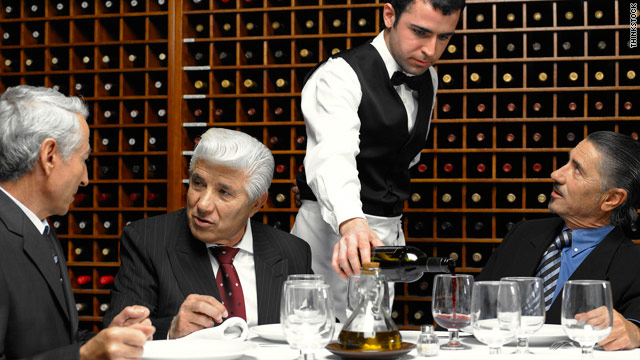 Most waiters would rather have a customer complain than leave unhappy.
STORY HIGHLIGHTS
RELATED TOPICS

(CNN) -- Many people wouldn't last a day in a server's non-slip shoes.

Refilling glasses, balancing trays and clearing dirty plates with a smile can be taxing. But the prospect of a 15 percent to 20 percent tip at the end of the meal is the reason waiters work so hard.

So after a customer repeatedly dined without leaving a good tip at KanPai Japanese Steak & Seafood House in Winston-Salem, North Carolina, the restaurant decided to take action

It is certainly not customary for servers to complain to diners if they're unhappy about their tip, but restaurant manager Michael Lam said this was a unique situation.

"In the restaurant business, of course you have people not tipping or not tipping good," Lam said. "You can't just tell them, 'don't come.' ... But [this particular customer] made a lot of trouble. [Her party] asked for a lot of things and was never satisfied."

At least one waiter thinks banning isn't punishment enough for a bad customer.

"I think people will burn in eternal fire if they're rude to a waiter," Steve Dublanica said.

Working at a psychiatric facility helped prepare him to deal with customers, says the author of the blog and New York Times bestseller "Waiter Rant."

The main difference between a mental facility and a restaurant, he joked, is that patients are easier to deal with than customers.

Steven Nicolle, who has worked in the food industry for more than 30 years as a bartender and a waiter, said he has never pulled a KanPai -- confronted a table about a lousy tip -- but there are plenty of times he wanted to.

He thinks "campers" are the worst customers.

"The thing that really aggravates me is when I give someone excellent service, they don't leave enough gratuity and, on top of that, they sit there [for a long time] after paying," Nicolle said. "Then you're not able to turn the table over, and they didn't leave you fair gratuity for what you've done."

And there's more where that came from.

What were you doing during the 12 hours we were open?

"People are not considerate of opening and closing times," Nicolle said, adding that many customers don't realize, or don't care, that servers have to do side work after their shift. The day doesn't end when the doors are locked, he said.

"Sometimes you have set the alarm, close the door and vacuum before people will leave," he said.

"One of the biggest things customers do is the whole entitlement thing," Dublanica said. "They walk in off the street without a reservation on a Saturday night and ask for the nicest table in the house."

Common lines from impatient customers include "I know the owner" and "I come here all the time."

Either take the time to make a reservation or wait quietly for a table to open, he said.

What makes you think you're better than me?

"I hate the whole perception that because you're a server, you must be a loser. ... People fail to see the fact that people do this to get through school," Dublanica said. "In this economy, people do it because they have to. People with MBAs are waiting tables."

The worst question you can ask your server is, "what else do you do?" he said.

Dublanica has sometimes responded with "I'm an actor in pornographic films" or "I'm a laid-off hit man."

"The best way to mess with a customer is to make them feel slightly uncomfortable, but not enough to get them to run," he said. "Correcting them when they mispronounce an entrée is another good way to shut them up."

You want the chef to make you what?

"Don't order stuff that's not on the menu!" Dublanica said. "Use your head. If you want sushi, go to a sushi place. If you want French food, go to a French restaurant."

And if you absolutely cannot live without a special request, don't get angry when it doesn't taste good, he said.

I know you're not really allergic

"Most people are not allergic; they just don't like the stuff," he said.

Every so often, someone will come in with a very serious allergy, but most of the time it's just customers who say they're allergic to garlic yet chose to eat at an Italian restaurant, he said.

This is a restaurant, not conflict mediation

"The worst couple to serve is the couple who have just had a fight before they come to the restaurant. ... They end up taking their problems out on the food," Nicolle said. "It's so they'll have something in common again. ... Then they can walk away holding hands and saying, 'It was the stupid waiter's fault.' "

Really? Because it looks like you enjoyed your meal

Don't try to send your meal back if you've eaten half of it, and especially not after the meal is over, Dublanica said.

Dublanica said some people get offended when their server places the check in the middle of the table, but it's the politically correct thing to do.

"Even when people are on a date, we'll put the check in the middle of the table," he said. "Who knows, you might get lucky, and the girl will pay."

Don't be passive-aggressive with the check

Some people will put the check in front of them and lean on it or place it in their lap when they're ready to pay, Dublanica said.

"Don't make us come to the table and say, 'May I take that?' " he said. "Have your credit card or money sticking out the top. Some people will put their wallet on the table. Just make sure there's some way we know it's ready."

"If your kids make a mess at the table, tip a little extra," Dublanica said. In most restaurants, servers are responsible for cleaning up after their customers.

No, I'm not going to spit in your food

"We don't get upset if you send food back. We understand that at some point, your pasta might be cooked into mush, or you'll get a bad piece of meat." Nicolle would rather have a customer complain than leave unhappy.

"When I get a good tip, it's because everything has been good and I've been able to fix everything that's not good," he said.

Dublanica acknowledges that, every so often, the waiter is the center of the problem.

"We're in a recession. ... When we want to go out to eat, it's our hard-earned money we're spending," he said. "We want to have a good time. We don't want to worry about the waiter's personality disorder."