Online dating liars: Why they do it 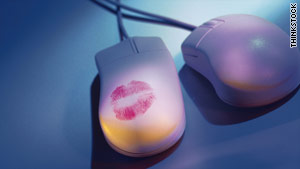 Those who tell you what you want to hear in real life will tell you the same online, a study finds.
STORY HIGHLIGHTS
RELATED TOPICS

(CNN) -- Worried that the 27-year-old man making more than $70,000 as profiled on an online dating service isn't so young or taking home that much cash?

Chances are he's telling the truth if the site is geared toward long-term relationships.

But if he's lying, he's probably a people pleaser -- the type of person who'd try to put himself in the best light even if you'd found him offline first, according to a University of Kansas researcher.

In professor Jeffrey Hall's survey of 5,020 men and women who belonged to an undisclosed Internet dating site, most respondents indicated they wouldn't lie. But those saying they were most likely to lie generally gave answers to other questions indicating they were people pleasers, or "high self-monitors."

Such people have an acute sense of what others like and control their own behavior accordingly for social ends. Because they want to be liked and fit in, these people, whether online or off, may lie about weight, age, income and interests, Hall said.

In the study, published in the February issue of the Journal of Social and Personal Relationships, respondents were asked to rate on a 10-point scale the likelihood that they would misrepresent their education, income, relationship goals, personal interests, weight and age to a potential date online. An answer of 1 indicated "not at all likely;" a 10 indicated "very likely."

"On average, answers were close to around 2 for the most part," Hall said.

Men indicated they were more likely than women to lie in every category except weight, according to the study.

However, the differences between men and women were small, Hall said. For example, men led women 2.01 to 1.83 when it came to lying about education and income. Women led men 3.24 to 2.37 in lying about weight.

"Personality makes much more of a difference in how much people lie," he said.

Hall wouldn't name the dating site to which the respondents belonged, but he said that people interested in long-term relationships "tend to be the users that are attracted to this site" and that the site didn't commission the study.

Hall said it added to other research showing that -- particularly for people looking for long-term relationships -- the amount of lying is usually small, because people want an anticipated face-to-face meeting to go well.

"Online daters shouldn't be concerned that most people are presenting a false impression of themselves," Hall said in a news release before Thursday's phone interview. "What influences face-to-face dating influences the online world, too."