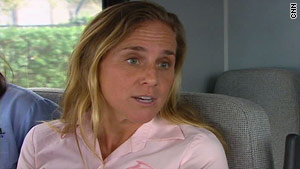 From the time she visited SeaWorld as a 9-year-old, Dawn Brancheau was hooked. From then on, her family said, she was determined to be an animal trainer when she grew up.

"It was her dream job," Brancheau's sister, Diane Gross, said Thursday. "And our family got to ride along with her in her dream."

But on Wednesday, Brancheau, 40, died at the Orlando, Florida, park after a killer whale named Tilikum -- a whale she trained and cared for -- grabbed her ponytail and dragged her underwater in front of stunned onlookers.

"She loved the animals like they were her own children," Gross said. "She went to work every day. She loved what she did."

Brancheau was the youngest of six children, born in Cedar Lake, Indiana.

She attended Andrean High, a small Catholic school in Merrillville, Indiana, where she was a cheerleader, on the golf and track teams, and student council president.

"She was so involved with the different clubs. She was the homecoming queen, the prom queen; she was pretty much everything," said Dave Pishkur, the school's alumni director.

Pishkur said Brancheau always talked about working with animals one day, and when she returned to Merrillville in 2007 for her 20th high school reunion, he remembers her being very attached to her whales.

"When we asked her if she had kids, she said, 'I don't have time for a family now. My kids are my whales,' " Pishkur recalled.

"It's devastating to think about what occurred," he added.

Brancheau had worked at SeaWorld for 17 years, according to a SeaWorld spokeswoman Leigh Andrus.

"She was one of our most experienced killer whale trainers," Andrus said.

Gross said her sister "loved her whales. She loved her family, and she will be dearly missed. She was a wonderful sister and daughter and aunt to many nieces and nephews." She also leaves behind a husband, Scott.

In a 2000 interview with CNN affiliate WESH-TV, Brancheau talked about the need to stay physically fit in order to deal with the physical exertion needed to work with the orca whales. She said she ran marathons, cycled and lifted weights to stay in the best condition possible.

"You want to prevent any injury and stay in great physical fitness so you can stay strong out there in the water with the animals," she said. "Anything to keep you in shape for what we're doing out there."

She also said trainers have to get to know the animals' behavior. "We work with them day in and out, teaching them basic things as well as the more complicated moves that you see."

SeaWorld has halted killer whale shows in all of its parks -- in Orlando; San Antonio, Texas; and San Diego, California -- until it can evaluate its safety protocols to provide the safest environment for its trainers.

"We will not move forward until that can happen with the trainers," Chuck Tompkins, SeaWorld's curator for zoological operations, said on CNN's "American Morning."

"And out of respect for Dawn and her family, we want to take time to respect her, and that's why currently we are not doing shows at SeaWorld, and we need to assure ourselves that we have the safest environment," he said.

Dealing with a wild animal carries inherent risks. Tilikum has been linked to two other deaths. He and two other whales were involved in the drowning of a trainer at a Victoria, British Columbia, marine park in 1991. The trainer fell into the whale tank at the Sea Land Marine Park Victoria and was dragged underwater as park visitors watched.

In 1999, Tilikum was blamed for the death of a 27-year-old man whose body was found floating in a tank at SeaWorld.

Tompkins said that because of Tilikum's size and his history, trainers did not get into the water with him.

No funeral arrangements for Dawn Brancheau have been announced.

Her family must now deal with the shock and sadness of losing their wife, sister and friend, who had lived a little girl's dream.

"To me, she had the most awesome job in the world, and she was the best," Gross said.