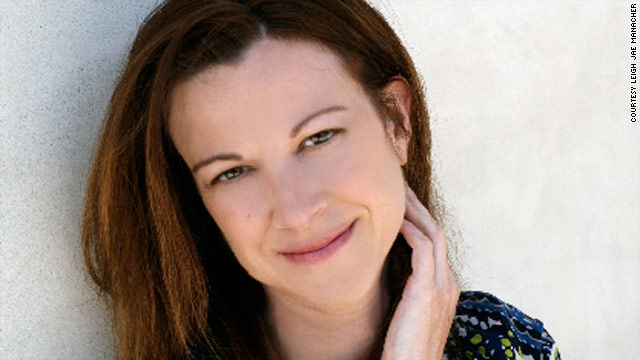 Lori Gottlieb is the best-selling author of "Marry Him: The Case for Settling for Mr. Good Enough."
STORY HIGHLIGHTS

(CNN) -- Hers is the book title that's been heard around the single women's world. It's made 30- and 40-somethings gasp, stomp their feet in defiance and mutter, "How could she?"

Lori Gottlieb's "Marry Him: The Case for Settling for Mr. Good Enough," which first appeared a couple years ago as an essay in the Atlantic, has touched a nerve. A big one, it seems. It's fired up bloggers and set off a barrage of e-mail exchanges shared by women.

But the 43-year-old author, a single mother by choice, feels a bit misunderstood by those who say they are outraged.

"The firestorm is with women who literally say on their blogs, 'I haven't read the book and have no desire to, but here's what I think about it,' " Gottlieb said. "You're reviewing a book you've never seen, but you hate it?"

CNN reached out to Gottlieb to talk about the hubbub surrounding her best-selling new book, why the word "settling" shouldn't give women hives and when impersonating Austin Powers on a date becomes a problem. Here is an excerpt from that interview.

CNN: What is it, in your mind, about the book and its message that got some women so worked up?

Gottlieb: I think it comes from the title. The title is used to really get women to think about what settling means. There's a survey in the book where men and women are asked, "If you got 80 percent of everything you wanted -- of your ideal traits in a mate or partner -- would you be happy?" The majority of women said, "No, that's settling," and the majority of men said, "Eighty percent? I'd be thrilled; that's a catch." So the question is: Is getting less than everything we want truly settling? And more important, semantics aside: Is getting anything less than everything we want going to make us less happy? The answer is no, and it probably will make you more happy.

CNN: What about the term "Mr. Good Enough"?

CNN: What is it about women, based on the survey you mentioned, that makes us think getting only 80 percent of what we want is settling?

Gottlieb: It has to do with this idea that we should have it all. We misinterpret what that means. Nobody said having it all was finding perfection. Nobody really has it all, but I think having what will make you happy is probably a much better way to approach life -- not just dating, but life. In fact, in the research it shows that people who have this have-it-all attitude are depressed.

CNN: What can women learn from men when it comes to how they approach dating?

I've been kind of ... intellectualizing myself out of meeting people. I've made it so much harder for myself than it ever has to be.
--Lori Gottlieb, author

Gottlieb: There are a lot of picky men out there, so this isn't about all men and all women, but I did talk to hundreds of men and women, single and married, for this book, in addition to the researchers and scientists. Talking to men was eye-opening. Men and women were asked, if they [had] any deal-breakers for going on a second date, what would those be? And men named three. If she's cute enough ... warm and kind ... and interesting enough to talk to, she gets a second date. Men are not going, "Am I going to marry her?" Men are like, "Do I want to spend another two hours with her?"

CNN: How did women respond?

Gottlieb: Women named 300 things that would be deal-breakers for a second date. We're talking a second date, another two hours with the person. And they were things like, "You know, we were having a really good time, but then he did this Austin Powers impression, and it just so turned me off. I can't get that out of my head." Well, if she goes on a second date with him, and he starts doing Austin Powers impressions, then dump Mr. Austin Powers guy. Don't go on that third date. Absolutely not. Who wants that? That's annoying. But the thing is, there's no correlation between the guy who's the nervous first dater ... and the guy who's going to be the great life partner that you're going to fall in love with. The smooth, charming guy who sweeps you off your feet on that first date, there's not saying he's going to be a better life partner than the other guy.

CNN: Why do women do this?

Gottlieb: Women are really good story-tellers, and they want to know how the story's going to end. And so they want to know pretty early on, on that first date, is this going to lead anywhere? Is this a guy who I could see myself in a relationship with? And if Austin Powers isn't on their mental checklist of what their guy is supposed to be like, they're out of there.

CNN: What have you been guilty of doing?

Gottlieb: Well, I'll tell you [laughing], the guy that I ended up dating in the book is a guy who I wouldn't have even e-mailed on Match.com because he was 5-foot-6. Now, I'm 5-foot-1 and change, but I always liked guys who were like 5-foot-9 or 6 feet, and I just thought, "I'm not going to be attracted to a guy who's 5-foot-6. Why waste our time?" And then he said his profession was real estate, and I thought, "I'm a writer. I need someone creative." And then he was wearing a bow tie in the picture, and I was like, "What kind of dork wears a bow tie?" But I really liked what he wrote. I liked his overall vibe. So I ended up e-mailing him, which I never would have done pre-book, by the way. I finally realized that clearly, what I was doing wasn't working.

Gottlieb: That's the guy who became my boyfriend [in the book]. And the bow tie thing ended up being an adorable story about him and his grandfather that made me like him even more. And the first time I saw him, I thought he was so cute. And the real estate thing, it turns out that he had gone to architecture school, and he designed and renovated buildings and was extremely creative, way more creative than I am. We make these assumptions about people, these snap assumptions, and they're often wrong. So we're preventing ourselves from actually seeing who we might fall in love with.

CNN: What did you learn to help yourself in writing this book?

Look for the Mr. Right who's actually going to make you happy versus the guy who fits some fantasy that you have.
--Lori Gottlieb, author

Gottlieb: I don't want to give away the ending of the book, but it allowed me to realize that there are lots of different kinds of people I could fall in love with. ... I've been kind of sabotaging myself, intellectualizing myself out of meeting people. I've made it so much harder for myself than it ever has to be. There are qualities about all of us that make us less than appealing. ... A lot of us have trouble differentiating between the overall appeal versus the specific things that may not be so appealing. Don't stop looking for Mr. Right, but look for the right Mr. Right. Look for the Mr. Right who's actually going to make you happy versus the guy who fits some fantasy that you have in your head.

CNN: How can we avoid being frustrated by the men our age who only seem interested in women who are younger?

Gottlieb: The men who want to date a 38-year-old are going to be very different from the men who want to date a 31-year-old. And that doesn't mean that I'm horrible and anti-feminist because I said that. I didn't make up the rules of how the world works. I think [the rules] suck, actually, but the fact is, this is how it works, and here's why. When you talk to men, they're saying, "I don't want to date the 31-year-old because I'm looking for the Victoria Secret model." There are some like that, but most men say, "Look, I want to have a family, and I want to get married, and if I have a choice of going on a blind date -- I don't know anything about these women yet -- with a woman who's cute, smart, funny, interesting, has all those qualities and is fertile or somebody who is maybe not going to be fertile ... I'm going to go on the blind date with the woman who is 31." That doesn't make these guys horrible people. If the situation was reversed, I would pick the fertile person, too.

CNN: Do you feel optimistic that Mr. Right is out there for you?

Gottlieb: I think I'm a lot closer to finding him now than I was doing what I was doing before. The whole point of my showing warts and all, and grimness and all, of what it's like the older you get is not to depress people but to say be aware. ... It gets harder. So if you figure out what's important when you're 30 versus it not sinking in until you're 40, you're going to have a much easier time finding someone much closer to your ideal. It doesn't mean there's anything wrong with these guys [who may be divorced, have kids or carry disappointments from previous relationships], but it means that it's going to look different.