How to solve work-at-home ethical dilemmas 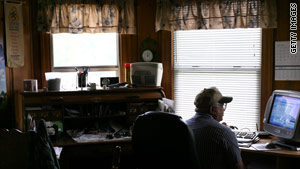 If we're careless, independence can damage our reputations as trustworthy consultants or members of the team, says the author.

Editor's note: Dr. Bruce Weinstein, The Ethics Guy, gives frequent keynote addresses in ethics and writes the ethics column for BusinessWeek Online. His latest book is called "Is It Still Cheating If I Don't Get Caught?"

As of 2005, the most recent year for which the U.S. Census Bureau has data, 8 percent of us work this way. That's more than 11 million people -- a pretty sizable chunk of the work force, any way you slice it.

And the number of people who work at home exclusively rose by almost one and a half-million between 1999 and 2005. Home isn't just where we live. For an increasing number of us, it's also where we make a living.

Is this good news? You bet. Because the world depicted in the film "Avatar" is a fantasy, working at home is as close to paradise as many of us are going to get: no boss hovering over us to keep us on track, unfettered access to food, drink, and TV; the freedom to surf the Internet whenever we want.

But if we're not careful, such independence can lead to an unproductive day, a waste of our scarcest resource, and damage to our reputations as trustworthy consultants or members of the team.

I'll describe three of the most significant danger zones facing us home workers (yes, I'm one too), and how we can turn these potential traps into pathways to success.

The ability to watch YouTube videos, grab a snack from the fridge, or check out the latest news on CNN.com whenever we want is both a blessing and a curse.

Right now, as I write this, there is nothing more I'd love to do than open GarageBand and write an amusing song.

The best way to deal with the temptation of time-wasters is to use them as incentives.
--Bruce Weinstein
RELATED TOPICS

But I know myself all too well, and a 10-minute break will quickly become a major undertaking lasting an hour or more.

I'm lucky in that I truly love my career, so most of the time, writing columns and preparing speeches doesn't feel like work at all. But even if you're fortunate enough to be in such a position yourself, it can be all-too-tempting to take a long lunch, a longer nap, or a scroll through the updates on Facebook that lasts far too long.

Goofing off isn't just unproductive; it's unethical. It's a form of theft, since we're taking time away from the work we're being paid to do. Think about it: One of the most fundamental ethical principles is the principle of fairness, which calls upon us to manage scarce resources appropriately.

And what is the most valuable resource we have? Not money. Time. We never have enough of this precious commodity, and it is 100 percent nonrenewable; once we give it away, it's gone for good. Thus, time management isn't merely a business or strategic issue; it's an ethical one.

The best way to deal with the temptation of time-wasters is to use them as incentives. In my case, I'm resisting the urge to write a tune on GarageBand until I hit "send" to my editor at CNN.

Then I'll have a great reason to mix it up with some drum loops and funky bass lines on my favorite diversion.

When you work at home, you're not really working, right?

But some of your friends and family members believe this canard.

They feel at liberty to call you during your working hours and expect you to be able to chat at length on the phone, or to return personal e-mails and texts promptly, or to take in a movie or meet for lunch.

In a way, you can't blame others for having these expectations. After all, it's only relatively recently that the distinction between work and home became blurred or erased entirely. But times have changed, and we need to remind our loved ones of this when necessary.

In "The Godfather, Part II," we learn that Don Corleone taught his son Michael to "keep your friends close but your enemies closer." During the workday, it's good to keep both at a respectful distance.

Home workers who juggle multiple clients and bill them by the hour run the risk of charging two parties for work that's been done for only one.

You then return to work for client A at 10:22, only to get an e-mail at 10:38 regarding client B, and you feel it's important to respond to this e-mail right away.

By the time you get back to client A, it's now 10:49, and you're able to get a good eight minutes of work in until the doorbell rings, and it's FedEx with a package concerning client B.

For many kinds of jobs, this scenario is the rule, not the exception.

What's the fair way to bill clients without rightfully being accused of double dipping?

Unless you're able to have an interrupted block of time for each project -- a worthwhile goal, but in our multitasking world, a tough one to achieve -- billing by the hour runs the risk of being an unethical business practice.

Better to bill by the project (or, better yet by the results you produce), so that you can jump from one project to another and back again guilt-free.

Bottom line: It can be extraordinarily difficult to manage the challenges posed by distractions, boundary issues, and double dipping, but the rewards for doing so are even more extraordinary.

And now, if you'll excuse me, I have an appointment to keep -- with GarageBand.