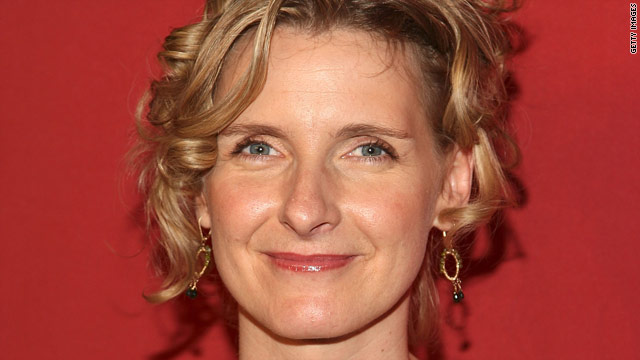 In her new book, "Committed," Elizabeth Gilbert confronts her fears of getting married again after a bitter divorce.
STORY HIGHLIGHTS
RELATED TOPICS

(CNN) -- For a woman about to be played on the big screen by Julia Roberts and hoping millions of fans embrace the sequel to her best-selling memoir, "Eat, Pray, Love," Elizabeth Gilbert is comfortably laid-back and unfazed.

She's quick to laugh -- a big, hearty laugh that punctuates her sentences. She stops an interview briefly to take care of a "dog crisis" at her home in New Jersey (the leash was nowhere to be found) and she's candid about her views on romance and love.

But Gilbert is in turmoil for much of "Committed," her new book, in which she explores and eventually comes to terms with marriage -- an institution she vowed not to re-enter after a bitter divorce from her first husband.

Living happily with Felipe, the Brazilian-born man she met and fell for in Indonesia in the "Love" portion of "Eat, Pray, Love," Gilbert was jolted into action in the spring of 2006 when Felipe was stopped by immigration officials at Dallas-Fort Worth International Airport.

The couple, told that they could get married or Felipe would never be allowed to enter the United States again, chose matrimony -- very reluctantly.

For Gilbert, the crisis set off a yearlong journey of traveling across Southeast Asia with Felipe and researching marriage, as the U.S. government considered his immigration application.

Gilbert, now 40 and married to Felipe for almost three years, recently talked about her quest with CNN.com. The following is an edited version of those interviews.

CNN: You write that you and Felipe were essentially sentenced to marry. Looking back at it now, are you glad this happened?

Elizabeth Gilbert: I don't know if I would use the word glad. I really do try to go through life with a feeling that destiny is my co-driver. Things occur that, even if they are not necessarily wonderful news at the time, they're invitations for transformation and sort of step up and redefine yourself and claim your life.

I can't imagine now my life having taken any other direction, but that's not to say that it was a delightful experience. I think ultimately Felipe and I would have married anyway.

CNN: So you dedicated yourself to study marriage. What surprised you the most about your research?

Gilbert: If you look at the history of marriage, anytime you see a conservative culture of arranged marriage being replaced by a more liberal culture of romantic marriage ... you will see divorce rates start to rise immediately.

It turns out that love is a very fragile notion upon which to base a very important and complicated institution. I think most people throughout history would look at the way we choose our marriages today and just think, my God, these people took huge risks. They risk their future, financial stability, property and their heirs on something as fragile and delicate as romantic affection.

It's not that that necessarily means that I advocate a return to arranged marriage, it just helps put in perspective why contemporary western marital arrangements can become so chaotic.

When love dies, and that's the only thing that holds you together, there is nothing to keep the marriage intact.

CNN: Some of your views might shatter fans of "Jerry Maguire" and the film's famous "You complete me" line. You write that you "refuse to burden Felipe with the tremendous responsibility of somehow completing me."

Gilbert: I'm such a romantic person and I love "Jerry Maguire" as well. I love that scene, I love that moment. But I think there does come a time when we have to distinguish between the romance of love and the reality of long-term, decades-long intimacy.

Sometimes what happens is we long for the fairy-tale ending. I'm a little bit more of an advocate for the fairy-tale beginning. I think it's wonderful when a love story begins with a great deal of romance and affection, passion and excitement, that's how it should be.

But I don't necessarily know that it's the wisest thing in the world to expect that it ends there, or that it should, 30 years down the road, still look as it did on the night of your first kiss.

CNN: What kind of ending do you envision?

Gilbert: I think it can be replaced with something sweeter, something that's more based on deep familiarity and trust and the unbelievable opportunity to get to know somebody with complete intimacy and to see their faults and flaws and contradictions, and if not embrace them, learn how to tolerate them.

CNN: You didn't want a big public wedding, which may shatter the wedding industry.

Gilbert: I don't think there's any danger whatsoever that anything I could say would shatter the wedding industry. It's well entrenched.

Not since I was about 13 years old, and obsessed with Charles and Diana's wedding, could I say that I have fantasized about the big white wedding. I have lots of romantic fantasies, that just doesn't happen to be in my playbook. But I recognize that it's something a lot of people care about, and I respect that.

I do think, though, that it's really important if we are to become adults, if we are to graduate out of girlhood and into womanhood, that one of the most important steps we have to take is to begin to recognize the difference between a wedding and a marriage.

CNN: You write in "Committed" that you can no longer "do infatuation." Why not?

Gilbert: Because I don't like what it does to me. I think there are probably people who can manage it better than I can, but it's a drug that I try very hard to stay away from.

CNN: You and Felipe did a lot of planning about what your marriage would look like. You prepared a prenuptial agreement and put together a list of faults each of you has. Should everyone do that?

Gilbert: I really don't want to be in a position where it starts to look like I'm giving advice or making prescriptions for other people's lives. It's hard enough to figure out my own marriage.

CNN: And you both agreed you did not want kids.

Gilbert: He had children already, so for him it was a really simple question. He had already done that and he had done it really well.

Read an excerpt from Gilbert's book

CNN: Marriage has often been portrayed as something that protects women. But you found in your book that it benefits men the most. Were you surprised by that?

Gilbert: It's surprising, though it shouldn't be. Looking at study after study, it becomes quite chilling to see how very much benefited men are by marriage. Married men perform in life exceptionally better than single men, they live longer, they're richer, they're happier.

CNN: And yet men are often reluctant to enter into marriage.

Women give more and as a result they give up more.

I think the other problem is that women go into marriage with such high expectations, really inflated romantic ideas about what this relationship is going to be. Men go into marriage with virtually no expectations whatsoever. Ten years later, the men are delightfully surprised to find out that it's actually kind of nice, and the women have sort of had to take a nose dive from what they thought it was going to be.

CNN: Your romance with Felipe is very grown-up. You describe it as "real, sane, mature love -- the kind that pays the mortgage." Will a 25-year-old person reading your book get it?

Gilbert: There is not a single doubt in my mind I would not have listened to a word of this when I got engaged at 23.

I don't think you can come into your wisdom until you have made mistakes on your own skin and felt them in reality of your own life.

There's a wonderful expression, a Brazilian adage, that says most people never learn anything at all, very smart people learn from their own mistakes, and the geniuses learn from other people's mistakes.

CNN: How does Felipe feel about being featured in your book?

Gilbert: He's really proud of it.

CNN: Your ex-husband is writing his own memoir. How do you feel about that?

Gilbert: I feel like people have a right to tell their stories. I've exercised that right and now he's going to do the same thing, so what he puts in there is entirely up to him.

CNN: After writing this book do you still feel that marriage is "suffocating and old-fashioned and irrelevant"?

Gilbert: It can be. It also doesn't need to be.

What I did find after all this work was that it's a far more complicated story than I thought it was.

What I've discovered is that it's not so much a boxy, rigid institution, but a thousands-of-years-old, ever-evolving, liquid, flexible, malleable social science experiment that we are still very much tinkering with and that people will tinker with for as long as there's such a thing as institutionalized couplehood.

I feel more like I'm part of something that's very old and interesting rather than having been shoved into a container that doesn't fit me.

CNN: How do you feel about Julia Roberts playing you in the movie version of "Eat, Pray, Love," scheduled to come out in late summer?

Gilbert: It's exciting. It's an honor and it is surreal. It's also just as surreal that Javier Bardem is playing my husband. All I can say is that the real Felipe looks about as much like Javier Bardem as I do like Julia Roberts.