Culture and honesty died with Lennon 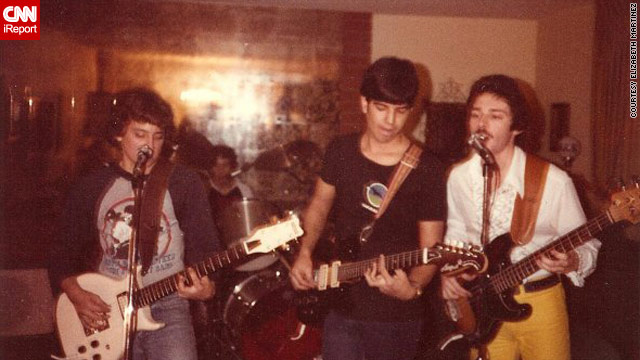 Elizabeth Martinez was 12 when she stormed in on her brother's band practice to announce that John Lennon had died.
STORY HIGHLIGHTS
RELATED TOPICS

(CNN) -- When David Schuster was walking a friend home down West 72nd Street one night in 1980, he heard what sounded like a car backfiring or a firecracker.

"I was on the other side of the street, and I heard people screaming," the 58-year-old said. "It seemed like seconds when sirens were all over the place. It turned into a madhouse."

Schuster knew the Dakota building was famous but figured the commotion could have been anything. It wasn't until he walked back to his apartment on 85th Street and flicked on the news that he found out John Lennon had been shot.

Thirty years ago today, the Beatles front man was murdered on the steps of his New York home. He and his wife, Yoko Ono, had just come home from an evening of recording tracks in their studio.

The anniversary of his untimely death marks a day of mourning for a whole generation. The cultural icon of their lives is gone.

Schuster remembers being just down the street

He has been enamored with the Beatles ever since he saw them at the Indiana State Fair back in 1964, before he was a teenager. When he found out Lennon had died, he said, it felt like part of his life had changed.

For Bev Cummins, 59, the Beatles were the only good thing that happened in the '60s. She remembers sitting in the local movie theater watching "Hard Day's Night" and fondly thinks back to the band's appearance on "The Ed Sullivan Show."

"I listened to the radio all that night, and tears came and went," she wrote in her iReport. "I wanted to be in the past, not the moment. I wanted my dad, but he was gone too. Suddenly I realized John Lennon was part of the precious past that I couldn't have back."

With tears in her eyes in her video, she remembered how much more tightly she held her then-2-year-old daughter after that night. She began to understand the fear of living in a society in which her daughter would be growing up. It was a different world, where bad things happened to good people, she said.

To this day, she won't speak the name of the killer because she doesn't want Mark David Chapman to be remembered.

"The first thing I heard was he did this because he wanted to be remembered," she said. "I didn't want to remember him. He took a beautiful legacy of the Beatles and shattered it."

Since Lennon's murder, Skip Cantil, his brothers and friends have gotten together on the anniversary of his death for what they call "Lennon night." They rent out a local bar in Fairbanks, Alaska, listen to Beatles tunes and reminisce about Lennon's life.

The get-together has become a celebration of Lennon's life that the group hosts nearly every year. It all came about after Cantil and a buddy got hammered that night, drinking away the loss of "the man," their ultimate idol.

Cantil, who was 20 then, says the shooting felt personal, as if someone had killed a family member.

"It felt like a brother was killed," he said. "I was just that age where I had listened to Beatles my whole life and it was my favorite band."

Even though decades have passed, Elizabeth Martinez says she's still just as shocked as the day she saw the breaking news bulletin on TV. The then-12-year-old sprinted into her garage, barging in on her older brother Paul and his band mates.

Expecting the boys to run inside and see the news for themselves, Martinez was surprised when they didn't budge.

"The response was plain and simple," she said. "One of them just yelled out, 'This one's for John!' and they continued jamming while I stood there. I shrugged my shoulders and ran back to the television."

Martinez: I was 12 and in complete shock

Martinez says Lennon's music continues to influence her and her brother. "I know that when I'm depressed, stressed or it's some personal problem, I can listen to John's music and feel at ease."

Lennon's music touched a whole generation and inspired some to aspire to play just like the quiet, bespectacled legend.

Joe Christiano works in IT, but the 60-year-old still plays music in bars on the weekends.

"As a young musician, I wanted to play like George, but sing and have the presence of John," he said. "He was the role model for the musician I became. Today, one can only imagine what might have been had he lived, and possibly reconnected with Paul, George and Ringo."

On the night of Lennon's death, Christiano was just getting home from an evening out when he overheard something shocking on Monday Night Football. His wife, Patty, wasn't paying much attention, but suddenly she said, "Did I just hear Howard Cosell say that Jack Lemmon died?" The couple was saddened when they found out it was really John Lennon.

Was it Jack Lemmon or John Lennon?

He spent a sleepless night with the radio tuned to the local FM rock station, WMMR. Beatles and Lennon songs floated through the air in between news updates about the shooter and other details. The next day at work, he kept his office door closed and pored over local news coverage.

That night, Christiano attended a candlelight vigil on the steps of the Philadelphia Art Museum. The crowd sang "Give Peace A Chance," "Imagine" and other Lennon songs.

"I still have the candle, and I'll always have the love, the memories and the music," he said. "I miss him to this day."

Jim Grace was also watching Monday Night Football that fated night after his wife had kicked him out for drinking too much. The diehard Lennon fan wasn't paying much attention though; he was worried about the fight he'd had with his wife.

After he'd sobered up, he called his wife from a pay phone, looking for some pity. But she said he still couldn't come home. He wandered around town that night, the sense of loss welling up inside him. Lennon had always been an inspiration, the Beatle he turned to.

"When they split up, John was pretty much the one I related to," he said. "He never, ever disappointed me with anything he put out. I was a Beatle fan first and a John Lennon fan after."

Grace has extensive Beatles and Lennon collections, including records and numerous interviews. Lennon's lyrics always seem to wrap up the truths of life for Grace. "Working Class Hero" is his favorite Lennon song, for that reason.

"He had a tremendous impact on my life," he said. "His songs were a road map of his life. He sang about what his life was like. His honesty was just admirable to me."