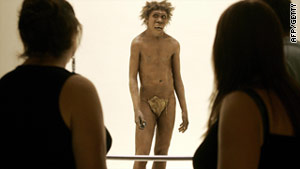 The findings will force scientists to revsie their theories about what caused the Neanderthals' demise.
STORY HIGHLIGHTS
RELATED TOPICS

(CNN) -- Neanderthals were more like us than we thought.

A new study shows they cooked and ate veggies, challenging an earlier theory that the early humans were carnivorous.

Researchers found starch granules from plant grains in their teeth, leading them to believe the early humans did not -- as previously thought -- have an exclusively meat-based diet. It also debunks the theory that Neanderthals became extinct because of dietary deficiencies.

Were Neanderthals less creative than humans?

Neanderthals ate various plants and included cooked grains as part of a more sophisticated, diverse diet similar to early modern humans, according to the researchers at George Washington University and The Smithsonian Institute.

"Neanderthals are often portrayed as very backwards or primitive," said Amanda Henry, lead researcher and a post-doctoral researcher at the university.

"Now we are beginning to understand that they had some quite advanced technologies and behaviors."

The researchers discovered starch granules in dental calculus -- which forms when plaque buildup hardens -- on the fossilized teeth of Neanderthal skeletons excavated from Shanidar Cave in Iraq and Spy Cave in Belgium, according to the Proceedings of the National Academy of Sciences report.

"Neanderthals and early humans did not visit the dentist," said Dr. Allison Brooks, one of the researchers on the project. "Therefore, the calculus or tartar remained on their teeth, preserving tiny clues to the previously unknown plant portion of their diets."