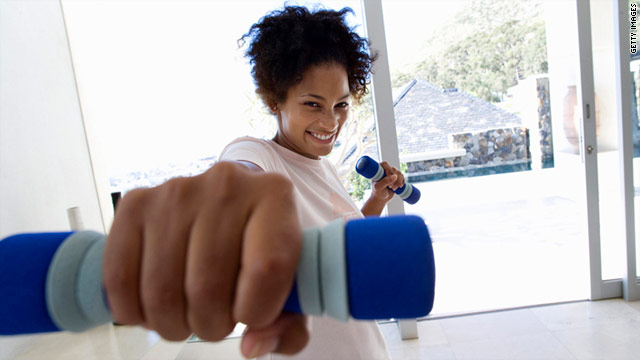 1. Catch the running bug. You'll continue to burn fat after your jog: People who run for at least four hours a week melt more calories than non-runners, even when they're not running, a Yale University School of Medicine study reports.

2. Crank it up early. Working out harder during the first half of your workout and taking it easier during the second burns up to 23 percent more fat than doing the opposite, according to a study from The College of New Jersey.

3 & 4. Go hard -- and make it quick. Staying at 80 percent of your max heart rate for 40 minutes can amp your metabolism for 19 hours afterward, research published in Obesity notes. And doing a shorter workout at 75 percent of your max aerobic capacity will give you a greater metabolic boost than sweating longer at 50 percent, a Colorado State University reveals.

8. Speed up, slow down. Alternating bouts of high-intensity and low-intensity cardio has been shown to torch pounds.

9. Put on weight (literally). Wearing a weighted vest (about 10 percent of your body weight) while walking can boost your calorie burn by 8 percent.

11. Let kettlebells ring. Not only does working out with kettlebells build muscle, but doing it for 20 minutes burns as many calories as running at a 6-minute-mile pace for the same amount of time.

12. Keep it up. As few as 80 minutes a week of aerobic or weight training helps keep you from regaining belly fat after losing weight, according to researchers at the University of Alabama at Birmingham.

13. Add poles. Use Nordic poles while you walk, and you'll burn 20 percent more calories, says research from The Cooper Institute in Dallas.

14 & 15. Lift first, nix the rest. Doing strength training before cardio can torch more fat than cardio alone. And if you do one move after another without pausing, "you'll see more gains in strength and muscle mass," says Dr. Pierre Manfroy, M.D., consultant for the book "100 Ways to Supercharge Your Metabolism."

17. Try aromatherapy. Exercisers who inhaled strawberry and buttered-popcorn scents torched more calories than those who sniffed neutral odors, according to research from the Smell and Taste Treatment and Research Foundation in Chicago.

18. Box yourself in. Wii boxing knocks out nearly twice as many calories as some other games, like Wii golf.

19. Kick it. Playing soccer not only torches more fat and builds more muscle than jogging, but it feels less tiring, Danish research reveals.

20. Stay in shape. Fit people have more fat-burning metabolites in their blood than couch potatoes do, scientists say.

22. Get more protein. Eating a protein-packed breakfast and lunch helps you burn more post-meal fat than if you eat lower-protein meals, according to Australian research.

Health.com: Is coffee healthier than you think?

25. Have an omelet. Eating two eggs for breakfast while dieting will help you trim more weight and body fat than if you ate the same amount of calories noshing on a bagel, scientists say.

27. ... and cut calories gradually. If you diet, don't trim more than 250 calories a day. Cutting calories too quickly slows your metabolism down, Dr. Manfroy says.

28 to 33. Munch on these. Almonds, cherries, yogurt, grapefruit, whole grains, and spicy foods have all been shown to torch fat.

34. Fuel up right. Eating a low-glycemic-index breakfast (such as muesli and peaches) will help you burn more fat during a subsequent workout than eating a high-glycemic-index meal (like waffles), researchers from the University of Nottingham reveal.

35. Think before you drink. Sipping as few as 90 calories' worth of vodka can slow your metabolism by 73 percent, one study shows.

36. Graze. Women who go without eating for long periods are more likely to have higher body-fat percentages than women who nosh more regularly, one study notes.

37. Dine like a Greek. Eating a diet rich in monounsaturated fat (think olive oil, avocados) can help trim both weight and fat, research published in the British Journal of Nutrition shows.

38. Stop gorging. Your body can only handle so much food at a time, so stick to 600 calories or less per meal to maximize fat-burning, says Leslie Cooper, co-author of "Flip the Switch: Proven Strategies to Fuel Your Metabolism and Burn Fat 24 Hours a Day."

39. Skip juice. Reaching for an apple instead of apple juice is not only better calorie-wise, but it'll also do a better job of boosting your metabolism, Dr. Manfroy explains.

Health.com: The best ways to boost your metabolism

43 & 44. Walk more (in denim). Researchers found that fitness-friendly offices (think treadmill desks, mobile headsets) helped people trim pounds and fat, as did wearing jeans to work, since dressing casual encourages you to move more. Wear comfy clothes when you can, pace while on the phone, and stand while chatting with co-workers.

45. Add fish oil (And work out). Taking 6 grams of fish oil per day and hitting the gym three times a week can help nix body fat, an Australian study reveals.

47. Nix the boob tube. Cut your TV time in half, and you'll burn more calories each day, research from the University of Vermont suggests.

48. Go mental. People who visualized themselves training a specific muscle boosted the strength in that muscle group, researchers found.

49. Eat a smaller dinner. Your body may not digest food -- and burn fat -- as efficiently if you down a huge meal right before bedtime, especially because your metabolism is slower while you sleep, Dr. Manfroy says.

50. Jump-start your morning. Wake up your metabolism -- and get fat-burning started -- by doing some sort of exercise within the first few hours of being awake, Cooper suggests.

51. Get your snooze on. Sleep for a solid 81D 2 hours instead of 51D 2, according to research published in the Annals of Internal Medicine, and you'll lose more fat. Sweet dreams!