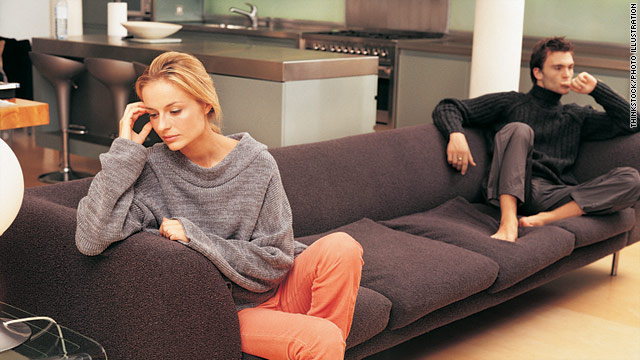 A new study suggests that if a person's relationships are stressful, it may be bad for his or her heart.
STORY HIGHLIGHTS
RELATED TOPICS

(Health.com) -- No man (or woman) is an island, and it's well known that social ties are good for your health. Social connections have been linked with greater longevity, and just living with someone else may lower heart disease risk.

But a new study suggests that if those relationships -- particularly with your partner -- are stressful, it may be bad for your heart.

Middle-age people who feel that their family members are excessively demanding or a source of worry are more than twice as likely as worry-free people to develop angina, the chest pain that occurs with exercise or exertion due to a reduced blood flow to the heart.

Frequent conflicts with an argumentative spouse or even a neighbor (as opposed to a worrisome or demanding one) were also linked to angina risk, but not fights with children or other family members.

In the six-year study, which included people in their 40s and 50s, about 1 in 10 people developed angina. Angina can be a harbinger of more serious problems such as heart attacks and even death.

"The general premise [has been] that those with a strong support system do better, and sometimes we just jump to the conclusion that having a spouse or child able to help them is a good thing," says John Erwin III, MD, an associate professor of internal medicine at Texas A&M Health Science Center College of Medicine and a senior staff cardiologist with Scott & White Hospital in Temple.

The study, published this week in the Journal of Epidemiology and Community Health, included 4,573 healthy Danish men and women. Overall, 8.3 percent of those in their 40s developed angina during the study as did 10.2 percent of those in their 50s. The angina risk was 3.5 times higher for people who had a demanding or worrisome spouse, and about 2-fold higher if the source of the problem was a child or other family member.

People who frequently fought with a partner had an angina risk 1.4-fold higher than conflict-free people; and a contentious neighbor was an even bigger risk -- 1.6 fold higher. But arguments with others, even children, weren't linked to angina risk.

This was true even after taking into account age, gender, socioeconomic class, use of heart medications, and whether or not the person lived alone or had depression. Depression has been strongly linked in previous studies to heart problems, as have stress and a broken heart.

And even though the study took place in Denmark, Dr. Erwin (who didn't conduct the research) feels that the results are easily extrapolated to the U.S. "Danes are from a fairly high-risk cohort similar to what North Americans are," he says.

Still, the study does have weaknesses, says Len Horovitz, MD, an internist with Lenox Hill Hospital in New York City, and people shouldn't worry that the occasional chest pain will send them to the emergency room with a heart attack.

For one thing, the estimation of angina was based on people reporting chest pain on exertion -- the researchers didn't check whether or not these symptoms translated into actual heart disease.

"There's no documentation that the subjective symptoms are borne out by coronary artery disease," Dr. Horovitz says.

Nor did the study show a cause-and-effect relationship. For example, people prone to worry might be more likely to notice or report chest pain in general.

"It's possible something else is driving this," says Judith S. Hochman, MD, director of the Cardiovascular Clinical Research Center at NYU Langone Medical Center in New York City. "Although there is reason to believe there's something to this because we know that acute stress increases the risk of [heart disease]."

And for that reason, both Drs. Erwin and Hochman say, doctors might consider asking their patients if they have many family demands or worries, or frequent fights with a partner.

Health.com: 28 Days to a Healthier Relationship

"A lot of people just don't learn how to handle conflict [and] sometimes that can be counseled," Dr. Erwin says. "With those patients frequently ending up in the emergency room or the clinic because of recurrent chest pain, when you drill down, often there are family or interpersonal conflicts and, when you bring those out into the open, the problem tends to resolve."

If a person doesn't already have a good network of friends and family, they could "find someone who could serve as support," Dr. Hochman says. Or, she adds, they could "use stress-reduction techniques, yoga, exercise, meditation."

The lead author of the study, Rikke Lund, MD, PhD, an associate professor of social medicine at the Institute of Public Health, University of Copenhagen, in Denmark, agrees.

Health.com: 9 Things to Stop Worrying About

"More attention to this should be drawn by both doctors and ourselves. It might be as important to know if your patient has very demanding/worrying social relations as to know if they are smokers," Dr. Lund says in an email. "Although we admit that the solution to that problem is more challenging than asking people to stop smoking."