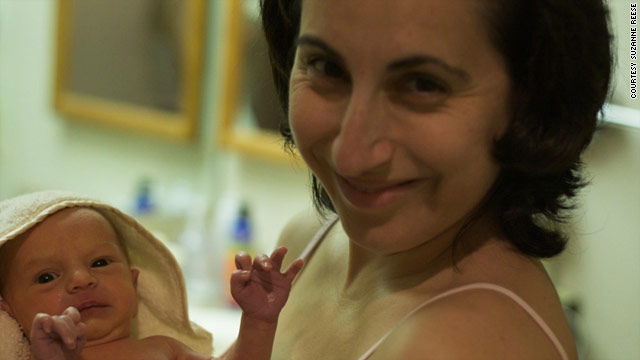 Suzanne Reese found that when it comes to breast-feeding, sometimes doctors and counselors don't have answers.
STORY HIGHLIGHTS
RELATED TOPICS

(CNN) -- All newborn babies cry, but Anika Reese seemed to be in a category all her own. She screamed in pain nearly all the time, grabbing her own little cheeks so forcefully she sometimes drew blood.

Her mother, Suzanne, describes Anika's first four months as "living in hell with an angel."

"There are almost no words to describe what I thought was only some form of prison camp torture," Reese says.

Reese noticed her baby's stomach was swollen and her poops were green and frothy. Several friends and family members suggested it might be a problem with Reese's breast milk, and urged her to give Anika formula instead. But Reese was "hell-bent" on nursing and refused to stop.

Only 43% of moms breast-feeding at six months

Unlike Reese, many mothers, for various reasons, give up on nursing. While 75% of mothers breast-feed their babies soon after birth, only 43% are still nursing six months later, according to the Centers for Disease Control and Prevention.

The American Academy of Pediatrics recommends moms breast-feed for at least a year, but the first six months are especially crucial, says Dr. Lori Feldman-Winter, a spokesperson for the academy, since most babies that age aren't yet eating solid food and rely solely on milk for nutrition.

Reese was committed to nursing because of the significant health benefits to her baby: fewer cases of gastroenteritis and ear and upper respiratory infections, to name a few, and now a new study out of Australia shows some breast-fed babies do better academically later in life.

While it's not easy to overcome the hurdles of early breast-feeding -- whether it's sore nipples, a screaming baby, or a low milk supply -- Reese managed to do it.

When she noticed Anika's belly swollen and strange, frothy green poops, Reese called lactation consultants, who told her all babies have gas and to be patient. Then, when Anika was 7 weeks old, Reese noticed blood in her daughter's stool.

The Reeses raced to the emergency room near their home in Ramona, California. Doctors gave Anika a barium enema to get a good look at her intestines.

The test showed Anika's colon was normal. The Reeses then took Anika to a pediatric gastroenterologist, who advised Suzanne to stop eating foods that might be bothering Anika. But Suzanne was already down to a diet of chicken, beef, sweet potatoes, and rice -- there was nothing more she could cut out.

Feeling like "a total failure," Reese still wasn't ready to give up nursing her baby. She called another lactation consultant, who listened patiently to her story and immediately offered this tip: pump some milk, throw it away, and put Anika to her breast.

"OVERNIGHT, we had a new baby!" Reese recalled in an e-mail. "INCREDIBLE! We were utterly relieved -- to the point of tears."

The lactation consultant explained Reese was producing too much foremilk, which is full of sugar and can irritate a baby's delicate gut if she gets too much of it. By pumping off the foremilk and getting rid of it, Reese was giving Anika more hindmilk, which has significantly less sugar.

"I was also utterly angry that we had to go through all of this when it was such a simple fix," Reese says.

Breast-feeding advice from moms who've been through "hell"

Reese found when it comes to breast-feeding, sometimes the experts who should know the answers -- pediatricians, lactation counselors -- don't.

"We're getting better at training residents to learn more about breast-feeding, but we still have a ways to go," says Feldman-Winter, a professor of pediatrics at Cooper University Hospital in New Jersey.

Reese is glad she kept looking for answers -- she's still nursing Anika, who turns 2 next month.

Various websites offer helpful breastfeeding tips, such as the American Academy of Family Physicians, pregnancy.org, and La Leche League International. In addition, La Leche League and babycenter.com offer forums where moms can seek advice from each other.

Here's what some mothers who have been through it have to say: 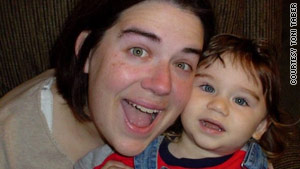 Toni Taber, with daughter Molly, benefited from advice from a lactation consultant.

I was told breast-feeding shouldn't be painful, but it was. Eventually, painful became excruciating. I cried while I breast-fed; I bled. The doctor said my daughter, Molly, wasn't gaining enough weight, and told me to feed her on a schedule and record how much she ate. I pumped around the clock, and could only sleep 90 minutes at a time, because I had to pump to keep up with her needs. Once, I was so tired, my husband fed her formula. I cried. How could I fail?

I finally saw a lactation consultant who figured out that Molly wasn't getting enough milk because she wasn't latched on properly. The consultant literally took me in her hands and showed me how to latch the baby on. She taught me to take the baby off over and over until she was latched properly. She showed me to put one finger under her chin to feel her chin moving and look for a wiggle at her ears when she ate, and listen to her swallow. All of these signs I never knew about. When I went home, I was alone with my baby girl, and she was hungry. I was afraid to try on my own. What if I fail again? But I latched her on, and it was beautiful. She was so happy. It was amazing! Nine years later, and I remember that feeling. She nursed for over a year, and I've since nursed three more children, including the one I'm nursing now.

Use a little lanolin: Laura Wellington of Ridgewood, New Jersey 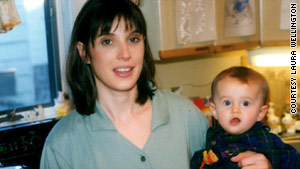 Laura Wellington, with son Ian, was relieved to learn she wasn't alone in breast-feeding difficulties.

I don't know any woman who would tell you, no matter how many children they have, that breast-feeding is "easy" in the beginning. Quite frankly, it's a nightmare and does not come "naturally" to mother or child (sorry for the disillusionment). I have five children and the initial stages of breast-feeding sent me gritting my teeth with each one of them. So swollen were my breasts and cracked my nipples, I wanted to cry.

With my oldest child, Ian, I was exhausted, feeling like a failure and the worst mother in the world in trying to do what I believe is the best for my baby. Thankfully, it was a man (my brother-in-law, Mark) who talked some sense into me, recounting the story of how his wife experienced the same thing. So I wasn't a freak after all! Eureka. He told me she literally wanted to kill him every time their daughter clamped down on her nipple. But then, she learned the value of lanolin to help soothe cracked nipples as well as her own breast milk's healing properties (a little rubbed on her nipple after a feeding coupled by air drying... it made a difference). I think the biggest relief that made all the difference in my continuing was knowing I wasn't alone. Believe me, prior to Mark's conversation, I bought a tub of baby formula that stared me down for days. In the end, I absolutely adored the bonding that I felt with each of my children once I got over the initial hump. 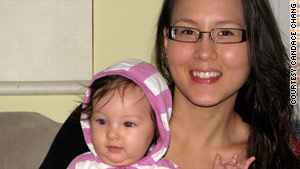 "I quickly learned that neither my baby nor I knew what we were doing," says Candace Chang, with daughter Talia.

As "natural" as breast-feeding is, I quickly learned that neither my baby nor I knew what we were doing. We had latching issues from the very beginning. Instead of really taking in the nipple and areola, she'd kind of suck it in like a straw. For the first time in a long time, I felt truly dumb. How could I not know how to do this? C'mon, a baby opens up and sucks on the nipple. What could be so freaking difficult about that?

Apparently it is, and the hospital lactation consultants (AMEN to them) helped us sort out our latch issues, but the very best advice on breast-feeding I received was from my pediatrician. He equated breast-feeding with sex, meaning the more relaxed I was, the better it would be. He told me to stop thinking about it, just do it, and it would all sort itself out in the end.

My girl was exclusively breast-fed for the first six months of her life, and I attribute much of our breast-feeding success to our pediatrician. I was encouraged to call the office, e-mail him, etc. E-mail! It's the best thing a doctor could have given me. The fact that my daughter's pediatrician respected my wish to breast-feed and tried very hard to calm my nerves is something for which I will be forever grateful.