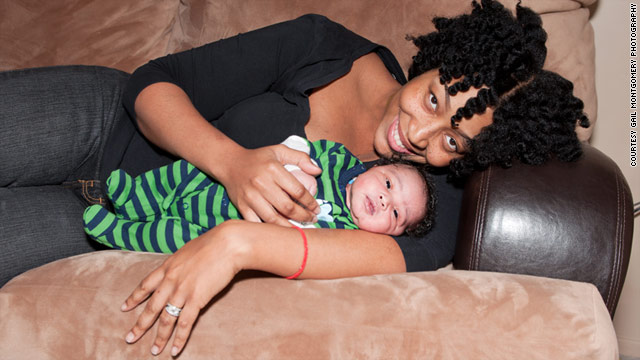 Aneka gave birth to a healthy boy this month at home, after she had given birth to three children through Cesarean section.
STORY HIGHLIGHTS
RELATED TOPICS

It was her obstetrician wanting to know where the heck she was. Did Aneka forget that today was the day for her cesarean section? How could she have forgotten?

No, Aneka hadn't forgotten. She hadn't shown up intentionally.

"She told me, 'You're being irresponsible. Your baby could die. You could die,'" Aneka recalls. Then the doctor hung up.

Aneka (she doesn't want her last name used) had already resolved to not have a C-section, even though the doctor told her it was absolutely necessary. She wasn't going to be opened up surgically, no matter what her doctor said, no matter what any doctor said.

In some online communities, Aneka is a hero who defied the obstetrical establishment and gave birth her way. To many doctors, however, she's a risk-taker who put her and her baby in peril by giving birth at home.

Aneka's story begins nine years ago with the birth of her first daughter, Nya. After 10 hours of labor, her doctor told her she wasn't progressing quickly enough, and she needed a C-section.

In a postpartum visit six weeks later, the doctor told her she'd needed the surgery because her hips were too small to pass the baby.

"I thought to myself, what's she talking about, I don't have small hips," Aneka remembers.

Four years later, doctors told Aneka she couldn't deliver her second child vaginally, since Nya had been delivered by C-section. Studies show when a woman gives birth vaginally after having had a previous C-section, there's a higher chance her uterus will rupture since she's pushing against scar tissue.

Then again, when Aneka was pregnant with her third child, son Adasjan, she had a C-section for the same reason.

When she became pregnant with her fourth child, a boy named Annan Ni'em, she expected to have a fourth C-section. But about seven months into her pregnancy, Aneka started to read more about childbirth online, and noticed a documentary by actress Ricki Lake called "The Business of Being Born," a film released in 2008 that questions the way American women have babies. 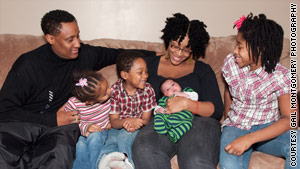 Aneka made a controversial health decision by giving birth vaginally to her fourth child after three previous C-sections.

"I was a little bit angry after watching documentary," she said. "It made me realize I'd been robbed of the birthing experience. If possible, all women should be allowed to birth naturally."

The closest hospital that would let her try to deliver vaginally was in Manassas, Virginia, about 90 minutes from her Maryland home. She and her husband, Al, decided that was too far.

So just seven weeks away from her December 1 due date, Aneka contacted the International Cesarean Awareness Network, an advocacy group that promotes vaginal births after cesareans, or VBACs.

"She asked me if I could find someone who would deliver her vaginally," remembers Bobbie Humphrey, who works with ICAN. "She started to cry because she'd heard 'no, no, no you can't do this' so many times."

But Humphrey told her yes, that she knew of a midwife who would be willing to deliver her baby at home.

On December 5, three days after the C-section that never took place, Annan Ni'em was born at home. He weighed 9 pounds, 6 ounces and was delivered after 20 hours of labor, and, she says, just four minutes of pushing. He was completely healthy.

"We were all crying at the delivery," says Humphrey, a doula who assisted the midwife at the birth. "It was very emotional. I was just so proud of Aneka."

Soon, word spread on e-mail lists and chat rooms about the healthy delivery.

Vaginal births after cesarean sections pose some risk, but so does having another cesarean. After weighing the risks of each, the American College of Obstetricians and Gynecologists came out with a statement earlier this year saying it's reasonable to consider allowing women who've had two C-sections to try to have a vaginal delivery.

The group added that there's limited data about what should happen with women, like Aneka, who've had more than one previous cesarean.

Despite the ACOG statement, many doctors and hospitals refuse to do VBACs because of the risk. Women who try to deliver vaginally after cesarean have between a 0.5 percent and a 0.9 percent chance of having a uterine rupture -- a potentially deadly complication for both mother and baby, according to the American College of Obstetricians and Gynecologists.

Women with two previous C-sections have a 1 percent to 3.7 percent risk of a uterine rupture, according to ACOG.

Studies show the risk for a uterine rupture goes up if the woman's labor is induced. Aneka's was not.

Dr. Jeffrey Ecker, a spokesman for ACOG and director of obstetrical clinical research and quality assurance at Massachusetts General Hospital, warns against reaching too many conclusions from Aneka's successful VBAC at home.

"Anecdote is no way for folks to make plans," he says. "Just because something turned out well for one patient doesn't mean there are no risks and it will turn out well for you."

He says there's a reason that uterine rupture is more likely when a woman's had a C-section.

"You cut into the muscle of the uterus during a cesarean, and it heals with a scar that is often weaker than the muscle that was there before surgery," he says. "The scar can be weak enough that the contractions cause it to separate."

In that case, blood flow to the placenta can be interrupted, and the baby doesn't get enough oxygen.

In its latest position paper, ACOG recommended that VBACs be attempted "in facilities with staff immediately available to provide emergency care."

"There is potential for catastrophe if [a uterine rupture] happens in a home environment," says Dr. William Grobman, an ACOG spokesman and associate professor in the Department of Obstetrics and Gynecology at the Feinberg School of Medicine at Northwestern University.

Grobman says he understands Aneka's desire not to have another C-section.

"This was a last resort. This was a choice because she had no other options," he says.

But Aneka says if she has another child, she'll give birth at home.

"Once you have that experience there's no other way to go, being in the comfort of your home without any unnecessary interventions and feeling like you're in charge," she says.