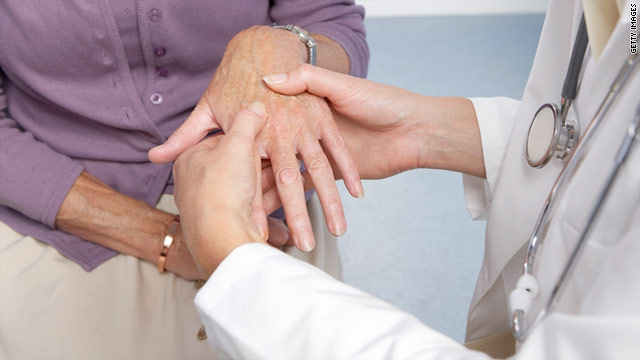 (Health.com) -- Doctors are increasingly turning to Oxycontin and similar painkillers to treat arthritis and other conditions in older people, but the drugs may not be as safe as once thought.

A new study suggests that elderly arthritis patients who take these drugs -- known as opioids -- are 4.5 times more likely to break their hip, pelvis, wrist, or upper arm than those taking non-steroidal anti-inflammatory drugs (NSAIDs) such as ibuprofen.

In a given year, about 1 in 10 older people who take an opioid will break a bone, compared with about 1 in 50 people taking COX-2 inhibitors, a more targeted form of NSAID, the study found.

"Opioids are not as safe as people had hoped," says the lead author of the study, Daniel H. Solomon, M.D., a rheumatologist and epidemiologist at Brigham and Women's Hospital, in Boston, Massachusetts. "We need to recognize that opioids are not without risk."

The study, which was published in the Archives of Internal Medicine, looked at nearly 13,000 low-income Medicare patients with osteoarthritis or rheumatoid arthritis who received a prescription for NSAIDs (such as ibuprofen), COX-2 inhibitors (such as Vioxx and Celebrex), or opioids (such as oxycodone and hydrocodone) over a six-year period.

In addition to the increased risk of fracture, people who took opioids were more than twice as likely to have a heart attack than their counterparts who took NSAIDs. Surprisingly, the risk of heart attack associated with opioids was even higher than that seen with Vioxx and other COX-2 inhibitors, a class of drugs that has been plagued by concerns about heart problems, including heart attack. (Vioxx and Bextra were withdrawn from the market for this reason, and Celebrex is now the only COX-2 inhibitor sold in the U.S.)

It's not clear from the study why opioids might increase the risk of fracture and heart attack. Opioid-related wooziness may contribute to falls, Solomon says, and the drugs may also affect bone mass. Even less is known about the link between opioids and heart attack, which the authors called an "unexpected finding."

The use of opioids has risen dramatically in recent years, as doctors and patients have sought to avoid the gastrointestinal problems that can occur with long-term NSAID use and the heart risks associated with some COX-2 inhibitors. "Over the past eight or 10 years, we have moved away from NSAIDs because of all the concerns around Vioxx and cardiovascular risks, so we moved toward opioids," Solomon says. "This is a tremendous increase based on not a lot of information."

Although the study findings should not discourage doctors from prescribing opioids to older people altogether, they do suggest that it may be time for the pendulum to swing back toward traditional NSAIDs and nondrug pain-relief methods, Solomon says. "As an arthritis specialist, I will still use opioids, but I will do so in an informed manner and make sure the patients are aware of the risks."

Joseph S. Ross, M.D., an assistant professor of internal medicine at the Yale University School of Medicine, in New Haven, Conn., says that the "broad brush conclusion" of the study is that doctors should first prescribe NSAIDs -- such as aspirin or naproxen (Aleve) -- before starting patients on other painkillers. "They seem on the whole to be safer than the COX-2 drugs, and now opiates," says Ross, who led a study on Vioxx that appears in the same issue of the journal.

The study had some important limitations. Though Solomon and his colleagues used statistical techniques to divide the participants into three closely matched groups, they did not explicitly control for characteristics such as alcohol consumption, smoking, and over-the-counter medication use, which could skew the results. (Over-the-counter medicines are especially important, as many pain patients take nonprescription NSAIDs in addition to opioids.)

The participants, whose average age was 80, were also overwhelmingly female and white, so it's not clear how the results may translate to other demographic groups.

Gurkirpal Singh, M.D., an adjunct clinical professor of gastroenterology and hepatology at the Stanford University School of Medicine, in Palo Alto, California, stresses that the study does not show that opioid use directly causes heart attacks or bone fractures. "I would consider this hypothesis-generating and intriguing," he says. "We can't say that opioids cause these toxicities and [that] we shouldn't use them. We are nowhere near the level of proof we would need to say that."

Some opioids may be safer than others, however. In a separate study published in the same issue of the Archives of Internal Medicine, Solomon and his colleagues looked at the rates of cardiovascular events and fracture among people taking five types of opioids for non-cancer pain.

People taking codeine appeared to have a higher risk of heart attack and other cardiovascular events compared to those taking hydrocodone, the study found. Two other opioids, tramadol and propoxyphene, appeared to decrease the risk of bone fracture compared with hydrocodone. (In November, propoxyphene was pulled from the U.S. market over concerns about increased risk of heart rhythm abnormalities.)

Solomon says that more research will be needed in order to pinpoint which pain medication is safest for any given patient. "There is no one answer," he says.