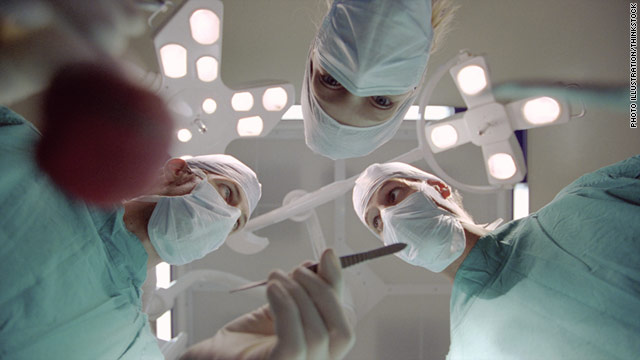 Surgeons see patients who, for insurance or slowdown at work, find the end of December is the best time for an operation.
STORY HIGHLIGHTS

(CNN) -- There were hats and party blowers and papier-maché rabbits for Christine Clifford's New Year's celebration. She counted down to midnight with her husband, children, relatives and friends in the only place where she could be with them that night: her hospital room.

On the morning of December 31, 1994, Clifford had a lumpectomy to remove her breast cancer. She'd wanted to have the surgery before the end of the year because she'd already met her insurance deductible and she wanted as much coverage as possible for the procedure. After the cancer diagnosis, she didn't want to postpone her terrifying operation into the new year, and New Year's Eve was the surgeon's first opening.

"I remember the doctors and nurses thinking, 'This is crazy, here's this woman who's had surgery, and she's cheering everybody else up,' " said Clifford, who is now cancer-free, and has drawn cartoons about her experience. "It helped my mood tremendously, as you can imagine, to have people down there caring about you.''

Some people will have to have life-saving surgeries at inconvenient times this month. But others choose to undergo procedures they've been putting off or that they want to have for cosmetic reasons, because it feels like the best time. Surgeons in many specialties are seeing patients who, for a variety of reasons such as insurance and a slowdown at work, find that the end of December is the best time to have an operation.

Dr. John Xerogeanes, chief of the Emory Sports Medicine Center in Atlanta, Georgia, is almost entirely booked for December because of high school and college athletes who delayed surgery until now. He'll be repairing dozens of torn ACLs -- anterior cruciate ligaments -- and dislocated shoulders from now up to New Year's, mostly because kids want to put those things off until finals are over and they are on winter break.

It's a bad time to injure yourself and think you can get fixed immediately.
--Dr. John Xerogeanes, orthopaedic surgeon

"The last two weeks in December are usually kids that got hurt during the end of the semester or last month or six weeks and say, 'Look, I just want to just do it when I'm home for Christmas or so I have time for my mom to take care of me, or so I don't have to worry about studying,' " he said.

The bad news for anyone who gets one of these injuries now is that the operating room has already been claimed, he said. Xerogeanes' office has a waiting list.

"It's a bad time to injure yourself and think you can get fixed immediately," he said.

Some people, of course, don't want to deal with elective surgery around the holidays. Dr. Jess Lonner, director of knee replacement surgery at Pennsylvania Hospital, said he sees a decrease in elective surgery patients this time of year, but others do choose holiday surgeries.

There are also patients who don't have families and don't want to be alone for the holidays, and surgery seems like a better option than staying at home, he said.

"The hospital seems to be an even warmer place during the holidays," he said. "And so for patients who really don't have family or a spouse, it may be a nice place to be, if you can call it that."

Looking good for the new year

In plastic surgery, an operation can be a gift. Dr. Phillip Haeck of Seattle, president of the American Society of Plastic Surgeons, recalled the husband of one patient asking if he could wrap breast implants and put them under the tree for his wife (he ended up using an empty box).

"It's important to note that when it's a gift, that doctor-patient relationship is critical to be established before the gift is made," he said.

In other words, before you pay for your best friend's nose job, she needs to have a consultation. If you want it to be a surprise gift, pay for the consultation, he said. But the patient needs to be motivated for the procedure.

Some people give the gift of plastic surgery to themselves. Irissa Miller, 25, of New York has been unhappy with her previous rhinoplasty for several years and is excited about getting a revision nose job this month at Dr. Steven Pearlman's office, which also has several patients lined up for holiday-time surgery.

She also has time off from work, so she won't have to be in public with her swollen eyes and nose, she said.

Dr. Min S. Ahn, medical director of the Aesthetic Wellness Center in Westborough, Massachusetts, said this is his busiest time of year. It's easy to take time off work and people can "hide," he said. Some popular treatments such as Botox don't require any downtime.

This season in particular seems to be busier than this time last year because the economy has picked up, Haeck said.

How to deal with holiday surgery

For those having procedures that require a hospital stay during the holidays, like Clifford did, she recommended giving your family a list of things that you won't be able to do at home, such as putting up Christmas decorations. Bring your own sheets, flowers and picture frames to brighten up your room, and any decorations you might want to make your own holiday, she said.

Watch out for miscalculating the insurance benefits of the holiday season, though: Clifford's plan for covering her entire cancer surgery experience backfired. She needed to stay in the hospital into January 1, so she had to pay the deductible for the new year anyway. Still, Clifford, who runs The Cancer Club, is glad she had her surgery on New Year's Eve, because it ended in celebration with her family and friends.

"Looking back on it, I think it lent itself to having a much more upbeat and positive attitude than it might have on any other day," she said. "Instead of feeling sorry for myself, a kind of 'woe is me' type of feeling, I remember thinking: 'Gosh I'm really blessed.' "