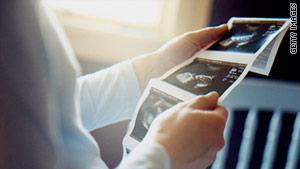 Each miscarriage a woman has increases her risk of heart attack by about 40 percent, according to the study.
STORY HIGHLIGHTS

(Health.com) -- Losing a pregnancy can break a mom-to-be's heart in more ways than one. According to a new study, women who experience a stillbirth or repeated miscarriages have a dramatically increased risk of heart attack later in life.

Compared with women who never had a miscarriage, women who had more than three were about five times more likely to ever suffer a heart attack, the study found. Having just one stillbirth more than tripled the risk of heart attack.

Each miscarriage a woman has increases her risk of heart attack by about 40 percent, according to the study.

Underlying risk factors for miscarriage or stillbirth -- such as high blood pressure or blood-vessel dysfunction -- may also contribute to heart attacks down the road, the researchers say.

"Many of the medical conditions that predispose to recurrent miscarriage and stillbirth can also predispose towards heart disease," says the lead author of the study, Dr. Elham Kharazmi, a scientist in the division of cancer epidemiology at the German Cancer Research Center, in Heidelberg.

During the 11-year follow-up period, 82 women had heart attacks.

The women who experienced miscarriages or stillbirths tended to be older, heavier, and more sedentary, and they were also more likely than other women to have diabetes, high cholesterol, and high blood pressure. Those differences can't fully explain the findings, however, because the researchers controlled for all of those factors, as well as smoking and educational attainment.

Dr. Richard Jones, an assistant professor of obstetrics and gynecology at Texas A&M Health Science Center, in Temple, said that while miscarriages early on in pregnancy are generally attributed to chromosomal problems in the fetus, late miscarriages are believed to involve "some underlying problem with mom," such as bleeding disorders or blood-vessel problems.

Other health conditions, such as polycystic ovarian syndrome (which has been linked to heart disease) and infections such as chlamydia (which contributes to plaque build-up in the arteries) may explain the relationship, said the German Cancer Research Center's Kharazmi.

And, as the authors point out, a recent study found that mice who miscarried more than once had elevated levels of tissue factor (TF), a protein that spurs both inflammation and blood clotting.

Dr. J. Chad Teeters, a cardiologist at the University of Rochester Medical Center in New York, said that women who have had a miscarriage -- or even more than one -- should not be unduly concerned if they don't have other risk factors for heart disease. Less than 1 percent of the women in the study had a heart attack, he notes.