At Thanksgiving, the hardest conversation (CNN) -- Barack Levin recently showed his children where the kidneys are in a human anatomy book, trying to explain why their daddy has been taking so many pills and feeling so tired.

What he didn't tell the 5- and 6-year-old is that he has been preparing for his own death since age 26, when he was told he had five years to live. He's hoping that his kidneys will hold up a while longer, so he can watch his kids grow up.

November is the month of turkey-carving and football-watching, but it's also a time of difficult, important conversations.

The nonprofit organization Engage With Grace is launching its third annual "blog rally" on November 24 to promote communication and critical thinking about end-of-life issues among family members and loved ones. Last year, about 100 bloggers posted a guide to people asking these important questions of themselves and their family members.

Given that the whole family is often in one place at Thanksgiving, this organization says there's no better time to bring up issues about long-term planning.

What to talk about 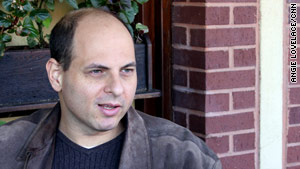 When a person is unable to voice his or her own wishes about medical care, the person who is named a "health care proxy" (the term varies by state) can speak to doctors on that patient's behalf. A living will, which describes what kind of medical treatment or care a person would want in that situation, may name who that person is.

Engage With Grace put forth this slide to guide these conversations. Whom do you want to make your decisions if you can't? Would you want to die at home or in a hospital? Do you have a living will? What about your parents?

"Something very torturous is to have lost somebody and to worry after the fact that you didn't do what they wanted because you didn't know what they would have wanted," said Alexandra Drane, founder of Engage With Grace.

It sounds a little morbid or awkward to combine such discussions with cranberry sauce and football. And Levin is sure he doesn't want to talk about his condition over turkey.

But others say after the meal, or at some other point during the weekend, it might be a great time to hash out those important details among family members.

"The way that Thanksgiving is set up is: You kind of spend a lot of time thinking about the gifts in your life, and of course you family would be the biggest gift. Knowing what they would want is a very big bond around Thanksgiving," says Niamh van Meines of Practitioner Solutions, a consultancy for hospices.

How to talk about it

Best time for an end of life discussion?

Obviously, don't just blurt it out, says Jeffrey A. Asher, an elder-care attorney with Eaton & Van Winkle LLP in New York. Start with a controlled conversation with a real purpose and goal.

You might start with the simple question "If something were to happen to you, what would you want us to do?" says van Meines.

Asher recommends that siblings and other close family members discuss end of life planning together the aging or ill person in question. Whoever might be involved in his or her care should be part of the conversation, he said.

They should think about where the family member is going to live if he or she becomes disabled, and who should make decisions about life support and other end of life care issues.

If one child agrees with the parent about end-of-life decisions, and the other has different views, that shouldn't be the focus when appointing a health care proxy, Asher says.

You should choose whichever child, relative, or friend will do what you want, regardless of his or her own belief, he said. "The goal is to have your decision-maker respect your wishes and do what you want according to your instructions, even if their own beliefs differ."

And sometimes, it's not what you expect. When van Meines brought it up with her husband, he half-jokingly said he wouldn't appoint her as his proxy because she, a hospice industry veteran, would "let him go." But that told her that he would want a full medical intervention, and she would respect that.

Levin, on the other hand, does not want to be kept on life support, and his wife knows this.

"If it gets to that point, it's going to be very hard for my wife to say 'OK, disconnect.' It's very, very hard. But I also know that really want my wife and kids to live their lives after I'm gone," he said. "I don't want them to mourn me for the rest of their lives."

Levin learned about his kidney disease, called MNGN, through a routine physical just as he was about to start a new chapter of his life. He had moved from Israel to the United States for business school, was about to begin a fast-track management job, and wanted to continue his relationship with the woman who would become his wife.

After he passed the five-year "expiration date" in relative health, he decided to marry his girlfriend and start a family.

Today, he's nearly 40, having beaten the initial odds, but his kidneys are 20 percent functional. A simple infection could be deadly; a few weeks ago he had a stomach virus that nearly resulted in total kidney failure. That's why he can't go to activities at his children's school, and had to make the difficult choice to not attend his daughter's birthday party.

He's hopeful that one day he'll be able to get a kidney transplant, but right now he's not on a waiting list. His book The Diaper Chronicles tells more about his personal story and how to handle end-of- life situations.

While at first he felt angry and frustrated and would ask, "Why me?" he does not fear death any more, he said.

"I live my life as if tomorrow is my last day. Because it could be my last day," he said.

If you need an adviser to help you through the legal aspect of the end of life process, the Alzheimer's Association local chapters and AARP both have resources. Caringinfo.org, run by the National Hospice and Palliative Care Organization, has state-specific forms.