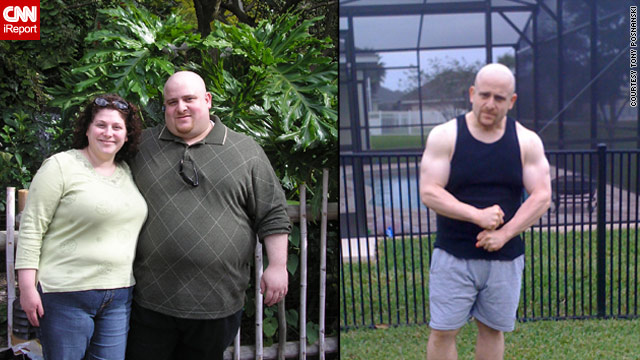 Dr. Sanjay Gupta visits with professor Mark Haub about his "Twinkie diet" experiment, in which he lost 27 pounds and 8 percent of his body fat. Plus, he'll take a look at fast-food kids meals, few of which meet nutritional guidelines. Watch "Sanjay Gupta MD," 7:30 a.m. ET on Saturday and Sunday.

(CNN) -- There were no diet pills, shakes or detoxes. And no, it wasn't caveman food, grapefruit, Twinkies, Taco Bell or Subway sandwiches.

"I changed the way I ate," said Posnanski, 34, who went from consuming 10,000 calories a day to 2,400. "I got rid of processed foods. I ate fruits, vegetables, lean meats. It is pretty boring, but the results aren't boring."

"There's nothing sexy about 'eat your fruits and vegetables,' " said Keri Gans, a registered dietitian. "We want to hear something else."

"Consumers need to understand that health and the ideal body weight are not found from a gimmick. It takes hard work. The end result is long-lasting success."

This week, a CNN.com story about a professor's diet experiment went viral, drawing more than 125,000 Facebook shares and more than 1,200 viewer comments. Some blamed portion control for the obesity epidemic in the United States: "People in France have fattening food but are thinner than Americans because they eat moderate portions. It's how much you eat that matters"

Others found humor: "Well, it's not like Twinkies are food, so no wonder he is losing weight."

People are attracted to these types of stories for one simple reason, Gans said.

"Most people think if they can eat junk and still lose weight, they're going to sign up for that," said Gans, author of the upcoming book "The Small Change Diet." They don't realize that losing weight can happen without deprivation or gimmicks.

It's a lesson that Posnanski learned after trying a slew of diet products. Over-the-counter diet pills made his heart race. Weight-loss shakes left him hungry.

At 400 pounds, Posnanski learned he might never be healthy enough to have children with his wife, Rebecca. His doctor said he needed bariatric surgery. In February 2008, he vowed to change.

Posnanski, an iReport contributor in Orlando, Florida, stopped spending $30 during 3 a.m. drive-thru binges at Taco Bell. He stopped polishing off boxes of pizza and buckets of chicken.

He practiced what he had always heard -- he reduced portion sizes and ate healthy.

There was no immediate difference, he said. "My pants were still large after that first day. But I felt like I could do this. It was different.

That's the key to weight loss, experts say. It can't be a temporary fix; the changes have to be lifelong.

"It's like the tortoise and the hare," said Dr. Sam Klein, director of the Center for Human Nutrition at the Washington University School of Medicine in St. Louis, Missouri. "You need to be the tortoise here. Rapid, short-term weight loss is not the way to go. It's the slow, steady approach. Small changes you stick to forever is key."

Critics warned that his overconsumption of Twinkies would have long-term consequences and questioned whether such a diet could be sustained.

"Please bear in mind this was a class exercise to illustrate issues and concerns that occur during weight loss," Haub said. "This project is not to promote a diet."

The basic premise is that people can lose weight eating anything from Twinkies, apples or baby food, as long as they reduce calories.

"Most people find out on their own. They do the cookie diet or cabbage diet for a week or two, then inevitably, maintaining something that eliminates major food groups [is] just such an unrealistic lifestyle change, it doesn't work," said Katherine Zeratsky, a registered dietitian at the Mayo Clinic in Rochester, Minnesota.

There are successful plans such as the low-fat diet and the Mediterranean diet that improve cardiovascular and metabolic health while also encouraging a range of healthy foods, Klein said. And programs that bring awareness to portion size such as Weight Watchers can help, because they essentially direct people to reduce calories.

"It's not taking a single cookie to make you lose weight, a pill or product," said Gans, a spokeswoman for the American Dietetic Association. "Eat your whole grains to lower cholesterol, fruits and vegetables to prevent cancer. The key to weight loss is about eating and creating a healthy relationship with food."

For people who hope for shortcuts, Klein said: "There's no magic bullet to lose weight and keep it off."

Posnanski, a former yo-yo dieter and restaurant manager, who gave up what he called "gimmicky" diets, shared how he has managed to sustain his weight loss:

• Work out one to two hours a day

"I don't believe in quick weight-loss diets," Posnanski said. "I believe in the rest of my life."