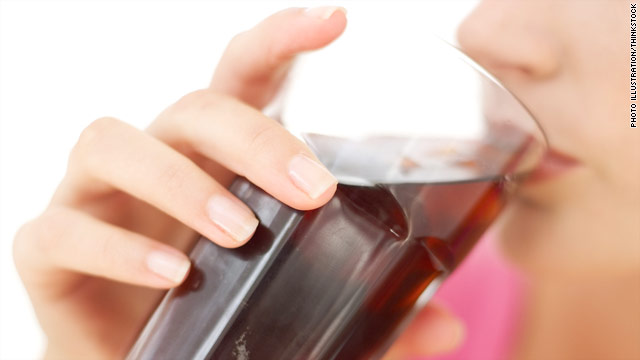 Women who consumed two or more cans of non-diet soda per day were twice as likely to develop gout.
STORY HIGHLIGHTS
RELATED TOPICS

(Health.com) -- Drinking too much soda, orange juice, or other sugary drinks appears to increase the risk of developing gout, an especially painful form of arthritis, according to a new study in the Journal of the American Medical Association.

Women who consumed two cans or more of non-diet soda per day were more than twice as likely to develop gout as women who rarely drank soda, the study found. (Diet soda had no apparent effect on risk.) Drinking 12 ounces or more of orange juice per day increased risk by roughly the same amount.

Women who had just one soda or 6-ounce glass of OJ per day were at 74 percent and 41 percent greater risk, respectively, compared with women who rarely drank either.

Health.com: Can fruit juice be worse than soda?

The culprit appears to be fructose, says the lead author of the study, Dr. Hyon Choi, M.D., a professor of medicine at Boston University School of Medicine. A sugar found in oranges as well as the high-fructose corn syrup used to make many non-diet sodas, fructose increases levels of the chemical uric acid, which causes gout. When uric acid levels in the body get too high, the acid hardens into sharp crystals that are deposited in joints.

Cutting back on sugary drinks "would help you, particularly for gout patients or if you have high levels of uric acid," says Choi, who presented his findings today at the annual meeting of the American College of Rheumatology, in Atlanta. (The findings corroborate a similar 2008 study in men, also led by Dr. Choi.)

The overall risk of developing gout is very low, however. Over a 22-year period, just 1 percent of the nearly 79,000 women included in the study developed gout, and the increased risk linked to soda and juice consumption was confined almost exclusively to women who had gone through menopause.

Estrogen appears to protect against gout, Choi says. As many as 98 percent of gout cases in women occur after menopause, when estrogen levels decline, he adds.

The study participants, who were part of a long-running, government-funded trial known as the Nurses' Health Study, were mostly white and between the ages of 30 to 55. Gout rates tend to be higher among men and blacks than among white women, so the increased risk of gout associated with sugary drinks may be slightly higher in the population at large than in the study, the authors note.

Still, fructose may play a relatively small role in the development of gout. Although the researchers controlled for body mass index and a number of dietary factors that have been linked to gout (such as alcohol, meat, seafood, and dairy intake), fructose consumption is difficult to untangle from other factors that can contribute to the disease, says Karen Congro, R.N., director of the Wellness for Life Program at the Brooklyn Hospital Center, in New York City.

"We can't prove 100 percent that [fructose] is the one item that is causing gout when there are so many other issues," Congro says. "Is it drinking beverages with high-fructose corn syrup, or is it the whole diet?"

Gout is a growing problem in the U.S. The percentage of adults affected by the condition rose from 2.7 percent in the late 80s and early '90s to almost 4 percent in 2008, according to other research presented at the meeting.