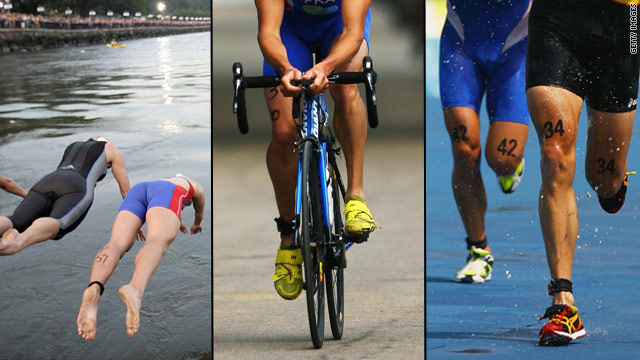 (CNN) -- At 27, Neil Pokorny is climbing the corporate ladder. A successful regional sales manager for a global automaker, he is driven by competition. But, as he got busier at work, his competitive spirit in his old sports -- swimming and rowing -- took a back seat.

He made it to the gym regularly, he says, but he didn't have a real fitness goal.

"One day I just decided I wanted to get back into shape, and I signed up for a triathlon that was six months away," Pokorny says.

Daunting as this new goal was -- one event that includes swimming, cycling and running -- he began training, slowly but surely.

"For me, it wasn't easy because I was traveling for work all the time. But I would tell myself that I wanted to do an hour of something every day," Pokorny said. "If i was traveling, I could go running from my hotel. If I was home, I could go cycling."

Pokorny's story is not uncommon. He's part of a fast-moving trend towards the sport of triathlon, which, according to Mike May of the Sporting Goods Manufacturers Association, is becoming the "new marathon." According to May's data, the sport has grown more than 50 percent just in the last two years.

It's a sport that CNN's Dr. Sanjay Gupta embraced in the 2010 Fit Nation Triathlon Challenge, Gupta and six iReporters trained from January to July, then competed together in the Nautica New York City Triathlon.

USA Triathlon, the governing body of the sport is seeing the increase firsthand.

Ready for a challenge? Just TRI it!

"We've experienced so much growth as an organization, with our annual membership over the last five years going from 50,000 to 135,000 annual members," said Chuck Menke, director of marketing and communications at USA Triathlon.

And the sport, just as the athletes, comes in all shapes and sizes, from the 15-plus-hour Ironman distance, to the entry-level super-sprint distance.

She, too, signed up for a triathlon on a whim.

"When I first got into it, I was trying to lose the typical weight that all women put on in college," Moore said. "In my first race, my whole goal was to finish."

The most popular distance - the sprint triathlon - is composed of a 500-meter swim, a 12-mile bike ride, and a 5k run. It is largely responsible for the huge growth in USAT's membership roles.

But why such a growth spurt now, some 30 years after the sport began? Menke says it's a combination of the Olympics -- triathlon made its debut in the 2000 Sydney games -- a growing group of middle-aged competitors looking to reclaim their athleticism, and a desire for fitness-conscious camaraderie.

"I think it's become popular for people who have established themselves in their career, have a family, and who are fairly settled in their lives, professional and personal, and they're looking for a new challenge," Menke said.

, founder of the Team Lipstick triathlon club, and CNN Fit Nation's Athletic Director, is the ability to cross-train.

"The fact that you're cross-training is much healthier, so you're not doing the same repetitive motion with your body day in and day out. Having the option to swim on a day when you're sore from running, or to swim and bike when you're nursing an injury is much better for you."

But though the sport may be right for many, the cost of entry can be prohibitive for some.

"The first year is expensive, because at minimum, you're putting about $1,500 into supplies, plus training, plus race entry fees," says Cozik. But, she says the upshot is that equipment -- bikes, wetsuits, clothing and shoes -- are likely to last a while.

And according to USAT's data, triathletes tend to be higher income to begin with -- the average triathlete has a annual salary of $128,000.

But Menke says, once people are bitten by the triathlon bug, it becomes a way of life.

"It really becomes a part of their life, just like family, their career, religion," he said. "It becomes more than just a sport, but a piece of who they are.

"It's a very rewarding sport, because it gave me this avenue outside of work to be competitive and accomplish goals," Pokorny said. "The first one I did was a sprint [distance], and I was hooked -- I loved it."

"Once you complete your first one, you get addicted," Moore said. "Its a fun, cool sport, and the people around it are very cool."