Five ways your cell phone can save you 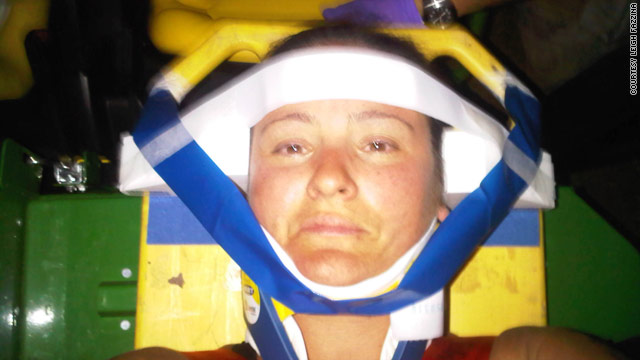 Leigh Fazzina was alone when she got into a bicycle wreck. She used her BlackBerry to seek help from her Twitter followers.
STORY HIGHLIGHTS

Those were the directions from triathlon organizers to competitor Leigh Fazzina as she ended the swim portion of the race in Farmington, Connecticut, and set out on the eight-mile bike ride last summer. Fazzina tried to follow the bumpy dirt path in the middle of the dense woods, looking up for the blue arrows, looking down to make sure she didn't hit any large roots or rocks.

But after about 15 minutes, Fazzina didn't see any blue arrows, and she didn't see any other bikers, either. As the sun began to set, she pedaled faster and faster, trying to find a way out of the woods.

That's when her bike hit a huge tree root, and Fazzina somersaulted high over her handles, crashed onto her left shoulder and rolled down a hill, her bike hitting her on its way down. Bruised and banged up, she yelled out for help, but no one responded. She hobbled over to her bike and grabbed her BlackBerry out of the pouch under her seat.

"I called my cousin and it kept saying 'connecting, connecting, but it wouldn't connect,' " she says. She tried to call again. "Then I looked at the signal and noticed I only had one bar."

Fazzina, 36, then remembered Twitter. She used it often in her work in her health care communications firm. She knew it might work even though a call wouldn't.

At around 7 p.m. that day in July, she tweeted, "I've had a serious injury and NEED Help! Can someone please call Winding Trails in Farmington, CT tell them I'm stuck bike crashed in woods." 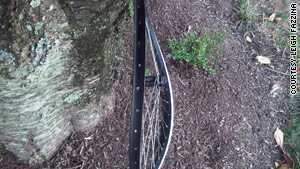 Fazzina's bike hit a huge tree root, forcing her to somersault over her handles and crash onto her left shoulder.

Within minutes, no fewer than six of her Twitter followers called the Farmington police, among them a medical student in Royal Oak, Michigan, a lab manager in Toronto, Ontario, and a fellow health care communications executive in the Middle East country of Oman.

It's amazing what 140 characters can do: EMTs arrived 18 minutes after Fazzina's first tweet, just as darkness was descending. 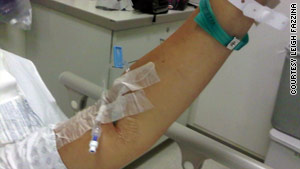 Within 18 minutes of Fazzina tweeting for help, EMTs arrived on the scene.

Fazzina chronicled her accident on her blog, and one of her Twitter followers, Steve Woodruff, posted Fazzina's tweets on his blog.

"I knew I'd get instant, serious help from the network I'm connected to on Twitter," says Fazzina, who has her own public relations firm in King of Prussia, Pennsylvania, and some 1,500 followers on Twitter. 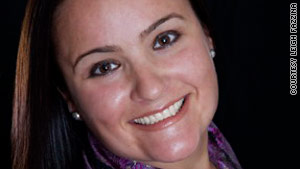 Fazzina has 1,500 followers on Twitter and said she knew she would get "instant, serious help" from her network.

"There's so much technology out there, and we should take advantage of it," she says. "Cell phones can do so many things. A friend of mine just bought a new BlackBerry and she hasn't put any apps on it, and I said, 'Why'd you buy it?' "

Whether you own a BlackBerry, iPhone, Android, or just a cell phone, there are applications and other tools you can use to turn your device into a safety tool. Here are a few suggestions.

1. Program your cell so people can find you

Cell phone apps can save your life

If you're lying unconscious somewhere, how would anyone locate you? Verizon, Sprint and AT&T all have locators where you can find members of your family.

In addition, you can do a search on iTunes for applications that use your smartphone's GPS to let you know where you are.

2. Put your "in case of emergency" contact into your cell phone

The trick here is to put your "ICE" information into your cell in as big and obvious a way as possible. After all, emergency workers are busy trying to save you and can't be spending precious moments browsing through your phone.

Connie Meyer, the incoming president of the National Association of EMTs, suggests putting the "ICE" information into your contact list under "ICE."

"Most EMTs know to look for that," says Meyer, a paramedic and registered nurse. "And make sure your ICE contact is someone who really knows your medical history."

Dr. Assaad Sayah, chief of emergency medicine for the Cambridge Health Alliance in Massachusetts, has another suggestion. Many cell phones have a place for information about the owner, such as your name and number, and you can also put your ICE information there.

ICE information is especially important for children, says Sayah, because in many cases, emergency rooms can't treat a child without consent from parents.

"If someone's sprained an ankle or something else that's not life-threatening, we can't even give pain medication until we get permission from the parents," he says.

You can put an ICE sticker on your phone to alert emergency workers that your contact is inside.

There's one problem with all these options: If you password-protect your phone, emergency workers can't find any of this because your phone will be locked.

3. Put your medical information on your cell

If you have a particular medical condition or are taking certain drugs, emergency workers need to know. You can put that information in the same place as your ICE contact, and you can also get an app that stores it.

However, be aware that an old-fashioned, low-tech approach may be best here. Meyer says EMTs will more quickly notice a medical alert bracelet or necklace than anything on your cell phone.

"We're focused on the patient, and so wouldn't be able to spend a whole lot of time looking for information on the phone," she says. "There are so many various phones out there we wouldn't know where to look."

4. Get an app that teaches you first aid and CPR

Several groups, including the American Heart Association, have an app for that.

Several apps, such as iTriage or DocGPS, will direct you to the nearest emergency room.