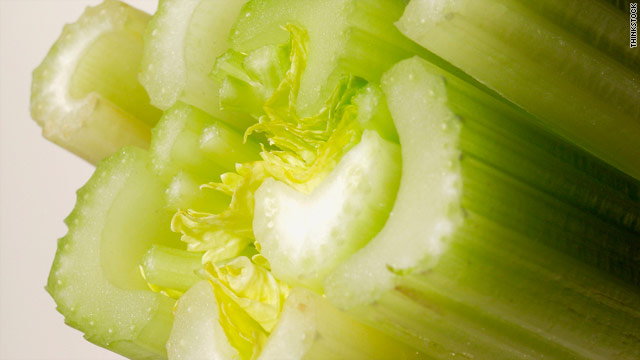 A San Antonio, Texas produce plant has been ordered to recall all products, due to a presence of bacterium in their celery.
STORY HIGHLIGHTS

(CNN) -- Authorities have shut down a Texas food processing plant, saying it was contaminated by bacteria linked to the deaths of four people, state health officials said.

The Texas Department of State Health Services on Wednesday ordered Sangar Produce and Processing to immediately stop processing food and recall all products shipped from its San Antonio plant since January. This comes after state laboratory results showed Listeria monocytogenes, a bacteria that can cause severe illness, in chopped celery at the plant.

Four people died after contracting listeriosis after consuming celery that had been processed at the Sangar plant, said Carrie Williams, a department spokeswoman. State health authorities came to this determination while investigating 10 cases in which people with serious underlying health problems contracted listeriosis over an 8-month period.

Six of those cases -- in Bexar, Travis and Hidalgo counties -- were linked to chopped celery processed at the SanGar plant, the state health services department said. Four of those people died, as did one other person who authorities believe got listeriosis from another source not connected with Sangar products.

Sangar, however, sharply questioned the state's findings and strongly denied wrongdoing, saying it has had "an excellent record of safety and health" over the past three years. Its president said outside tests "directly contradict" the state's conclusion.

"The independent testing shows our produce to be absolutely safe, and we are aggressively fighting the state's erroneous findings," said Kenneth Sanquist, president of Sangar.

State health inspectors said they believe the bacteria found in the chopped celery may have contaminated other products at the company's plant. Sangar processes a wide variety of products -- including three varieties of lettuce, peppers, carrots, cucumbers and various cut-up fruit, as well as salad, fruit and soup mixes, according to the company's website. They are distributed primarily in sealed packages to restaurants, hospitals, schools and other large institutions that serve food.

Besides the bacteria, inspectors found a condensation leak above a food product area, dirt on a food-preparation table, and hand-washing problems at the San Antonio plant, the state health department said. The state said that it is contacting distributors, restaurants and others who may have received Sangar products.

Listeria monocytogenes is a bacterium found in the soil, in water, and in animals that carry it without showing signs they are sick, according to the Centers for Disease Control and Prevention. It can get into vegetables from soil or manure that is used as fertilizer. The strain of bacteria is relatively resilient -- with an incubation period of three to 70 days, Williams said -- and some foods can be contaminated after cooking but prior to packaging.

The bacteria have been tied to listeriosis, which sickens about 2,500 Americans and contributes to the death of 500 people annually, the CDC reports. People with weakened immune systems, including newborns and the elderly, are especially susceptible to listeriosis. Pregnant women are about 20 times more likely than other adults to contract the disease.

In August, Sanquist told CNN affiliate KENS5 that food-safety measures were not tough enough, saying the U.S. Food and Drug Administration should be more involved in inspections. At the time, the SanGar president said that his company had never had a high bacteria count or had anything recalled.

"Ultimately, you can get someone very sick," Sanquist told KENS5, criticizing city health inspections as insufficient. "We're talking about fresh-cut fruits and vegetables that need to be sanitized."

The Texas health department is taking the lead in the investigation, with assistance from the Food and Drug Administration and the CDC. The state justified its closure of the Sangar plant, citing Texas law that authorizes such actions if conditions pose "an immediate and serious threat to human life or health."

"At this point, the order prohibits the plant from reopening without our approval," said Williams. "We will work with the company about setting up some guidelines before it can [reopen]."