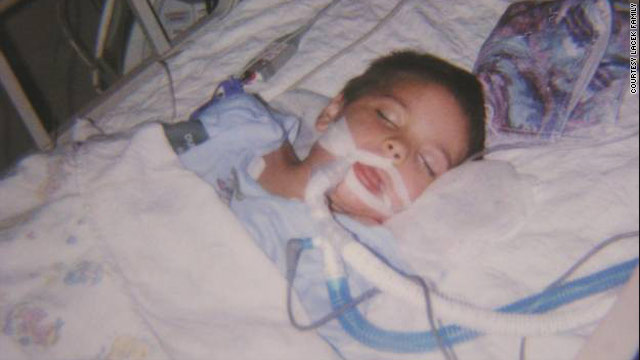 (CNN) -- For years, Kelly Lacek felt she and her husband made the right choice by not having her two youngest kids vaccinated. After all, the children were thriving without immunizations.

But in 2006, Matthew, their youngest, complained of a sore throat and a pain in his neck. The 3 year old suddenly developed a high fever. Hunched over, he struggled to breathe.

When his parents brought Matthew to the hospital, an older pediatrician asked, "Was your son vaccinated?"

No, he wasn't. The Laceks were among those parents who had decided to postpone or skip vaccines altogether, because of skepticism over the number of shots required, the ingredients or concerns over a now-largely discredited link between vaccines and autism.

While vaccine rates are strong overall, according to the U.S. Centers for Disease Control and Prevention, among people who have private health insurance, there's evidence of a troubling decline.

The rate of vaccination for kids covered under private insurance fell 4 percentage points in 2009, according to a nonprofit association that certifies health care organizations. It was the first time a drop had been seen. Read the full story on CNNMoney.

"This disturbing development indicates parents in commercial plans are rejecting valuable, evidence-based treatment," according to the National Committee for Quality Assurance report. The authors said that vaccine refusal could be a major factor.

There are theories that the recent whooping cough epidemic, which has killed ten in California, is a result of lagging vaccinations. In California, 320 new whooping cough cases have been reported this week. Health authorities urge booster shots for everyone 10 years or older who has not yet received it, especially women of childbearing age and health care workers who are in contact with pregnant women or infants.

A small subset of the population, typically well-educated, white and in the upper-middle class, have grown skeptical of immunizations, said Jason Glanz, a senior scientist and epidemiologist at Kaiser Permanente's Institute for Health Research.

"They're hesitant to vaccinate because of the belief that they don't work and that their kids are not at risk for the diseases," he said.

"Vaccines have been so effective that people now don't even know what the disease looks like or what problems the diseases can cause," said Dr. Robert Frenck, professor of pediatrics in the infectious diseases division at the Cincinnati Children's Hospital Medical Center in Ohio.

Americans no longer see the shrunken legs and paralyzed children -- effects of polio, a disease from a seemingly bygone era. This makes parents wonder why their kids need such shots for polio or measles, Frenck said.

"That's the mistake," he said, warning that pathogens can easily circulate with international travel. "The diseases are here. The disease is still out here."

Lacek had never heard of Haemophilus influenzae type b, which sent her young son to the hospital four years ago.

The bacterial infection known as Hib kills one in 20 and can cause brain damage and deafness. Hib is rare because it is a vaccine-preventable disease. Minnesota had an Hib outbreak in 2009.

Years before, Lacek, of Monroeville, Pennsylvania, worried about the purported association between vaccines and autism.

So Matthew had not received the Hib vaccine.

As Matthew's windpipe was shutting down that day in the hospital, his parents were told: "Your son has minutes to live."

The stunned mother cradled her son in her lap as doctors scrambled to find an open operating room.

"He didn't cry," she said. "He was laboring to breathe, He didn't move. He was perfect. He was just at peace."

"If you look at the 21 states that allow personal belief exemptions for immunizations, those exemption rates are going up," Glanz said.

Bert Martinez, of Houston, Texas, got personal belief exemptions for his five children.

Martinez believes his eldest daughter developed lupus as a result of the childhood shots. His other four children who did not receive vaccines do not have the condition.

"It's the only thing we have to go on," he said. "I know it's not scientific and it's not enough data. It is something."

Martinez said vaccine policies are based on fear. He expressed questioned motives of the drug company, vaccine ingredients and the frequency of recommended shots.

"From the age of a few months old, we start vaccinating with strong medication, when the reality is there's a 1 or 2 percent chance that it will hurt your child," he said. 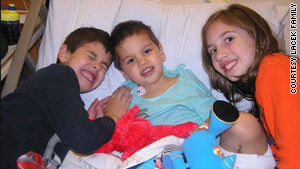 Matthew Lacek in the center, in the company of his siblings, recovered from his infection with Hib in 2006.

No vaccine is 100 percent safe or effective, because every individual's immune systems reacts differently. The issue of suing for vaccine injuries has has reached the Supreme Court.

Most kids end up getting vaccinated, even on a slightly delayed schedule, said Dr. Jennifer Shu, a pediatrician and CNNHealth's Living Well expert.

"Many parents who refuse or delay vaccines count on herd immunity from other families vaccinating their kids on time," she said.

Parents who choose not to vaccinate "are making decisions because of their concerns and want to do what's best for children," said Glanz, who researches the topic.

"We need to do better to address the parents, not alienate them. A lot of parents are confused and it's incumbent to develop effective ways to convey truthful information and establish trust with the parents."

Parents want to know the pros and cons of vaccines, and have control, Glanz said.

Despite the findings that vaccine compliance is falling in one segment of the population, the overall vaccination rate in the United States remains strong.

The CDC reported earlier this month that vaccinations for polio, measles, mumps and rubella, hepatitis b virus, chickenpox was near or above the target of 90 percent for children aged 19 to 35 months. Dr. Anne Schuchat, director of the National Center called the survey results, "very reassuring."

According to that National Immunization Survey conducted last year, less than 1 percent of young children did not get any vaccines. Unlike the National Committee for Quality Assurance report, this survey focused only on children between the age of 1 and 3, and did not differentiate insurance status.

Lacek said she does not criticize other parents who do not vaccinate their children.

"My husband and I made a choice from the information that we had," she said. "Every parent tries to make the best decision."

Matthew made a full recovery after being hospitalized for nearly a week and spending time in a coma in the intensive care unit.

He is now in second grade.

"I don't want any mom or dad to go through what we went through," Lacek said. "We were blessed to have a happy ending."

She talks about what happened to Matthew by working with a pediatric non-profit, Parents of Kids with Infectious Diseases.

"I felt that him having Hib disease and surviving is giving us the ability to communicate, to tell people not to go through what we went through," Lacek said.

Matthew and his siblings have received all their vaccinations.