Tune in to "Sanjay Gupta MD" to hear Diana Nyad share new details of her mission to make a world record swim at 61, this weekend, 7:30 a.m. ET on CNN.

The swim would break the world record for distance swims without a shark cage, which Nyad holds.

"It's a feeling of helplessness, and I've been up against a wall against it," she told Gupta during the taping of his weekend show, "Sanjay Gupta, MD." "Now we've had to postpone it all the way until next summer."

Nyad, 61, says she was trained and ready to swim by July 23, but a record stretch of high winds and dropping water temperatures is preventing her from making the attempt.

She says she will continue to train throughout the winter and make another attempt in July 2011, when the Caribbean waters warm.

Nyad's marathon swimming career began in July 1970, when she set the women's world record for the 10-mile swim across Lake Ontario: four hours and 22 minutes. But Nyad's biggest success came only after her biggest, most public failure.

In the summer of 1978, she attempted the 103-mile journey from Cuba to Key West, Florida. After 41 hours and 49 minutes in the water, Nyad's handlers gave her the bad news: Because of high waves and strong currents, she was so far off course that completing the swim would be impossible.

Devastated, exhausted and dehydrated, she returned to the U.S. But instead of giving up, she kept training. The following year, she completed what remains the longest swim in history without a shark cage: 102.5 miles from Bimini in the Bahamas to Jupiter, Florida.

That day was her 30th birthday and the last day of her swimming career.

"I was so burned out. You couldn't pay me to take one more stroke," Nyad said. "For 30 years, I did not swim a single stroke anywhere at any time, except in the ocean, paddling on a board."

And though she gave up swimming, she never gave up her active lifestyle, running, cycling and playing tennis at a pace most 20-year-olds couldn't maintain.

But 30 years after she took her last stroke, on her 60th birthday, Nyad began to swim against a new current: age.

"I was having an existential crisis about being 60," she said. "I told myself, 'You have to get real with life's lessons, one of which is, you can't go back.' "

In what she now realizes was an ironic moment, Nyad says, she looked into the rearview mirror in her car and decided that might not be entirely true.

"I realized there was one thing I could go back for, and that's the dream swim from Cuba to Key West."

So, at 60, Nyad began training, albeit very slowly.

"I started doing like 40-minute pool swims at a local country club pool," she said. "Before I knew it, I was starting to pass people; granted, they were the people there on a Tuesday afternoon."

In January, while in Mazatlan, Mexico, for a friend's birthday, she quietly sneaked away and did what only a swimmer of her caliber could do with very little training: swam around the island. 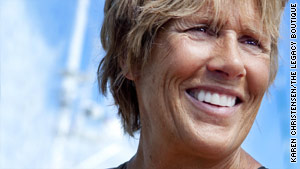 Nyad gave up swimming for 30 years but began training again once she turned 60.

For the six months following, Nyad's confidence, endurance and strength were growing. She was doing eight-, 10-, 12- and 14-hour swims every other week in the warm Caribbean waters off St. Maarten. But would she be ready for the ultimate test: a 24-hour training swim in the Florida Straits, the very waters where she would attempt a rerun between Cuba and Florida?

At 8:19 a.m. July 10, 40 miles off the beaches of Key West, Diana Nyad jumped off the side of "Got Ta Go," a 35-foot fishing vessel that was chartered to follow her as she swam back to shore.

At 8:19 a.m. July 11, still 10 miles from land, Nyad's handlers helped the swimmer climb back aboard ship. She was tired and dehydrated but felt strong and determined to complete her 30-year-old goal.

Watch Nyad on her 24-hour swim

"I felt strong the entire time," she said. "I felt like I could easily swim another 20 hours without any problem."

And she'll have to to succeed in a 2011 attempt. Based on weather conditions, the Gulf Stream current and Nyad's swimming speed, experts put the estimated time it will take for her to make the Cuba-Key West crossing at near 60 hours.

In July, Nyad was thrilled that the Gulf Stream was producing the warmest water temperature in decades: almost 90 degrees. But along with ideal-for-swimming temperatures comes ideal-for-hurricane conditions, a less than optimal situation for a swimmer who needs winds under 5 knots to complete her trek.