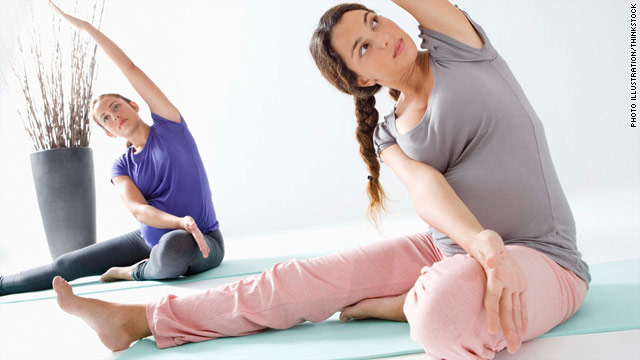 (Health.com) -- Fibromyalgia patients who aren't getting relief from prescription drugs and are in too much pain to exercise may want to try yoga, a new study suggests.

A weekly two-hour yoga class reduced fibromyalgia symptoms such as pain, fatigue, and stiffness by 30 percent in more than half of the people who took it, according to the study, which was published in the journal Pain. A control group of patients who continued their regular treatment regimen reported no change in symptoms.

The yoga program used in the study is a low-impact way for fibromyalgia patients to get moving, and it may even change the way the central nervous system responds to pain, says James Carson, Ph.D., the lead researcher and a psychologist at the Oregon Health and Science University, in Portland.

"Exercise is often recommended, but many fibromyalgia patients find that exercise is too painful to continue or that the classes aren't tailored for them," Carson says.

Carson and his colleagues adapted elements of the gentle Hatha style of yoga into a program they call "Yoga of Awareness." In each two-hour session, patients spend 40 minutes working through a series of familiar yoga poses (warrior 1, child's pose) and another 80 minutes on meditation, breathing exercises, and group discussions about coping with pain.

The non-yoga activities are "major components of [the program] -- not just add-ons -- in helping patients learn to handle pain and fatigue in a different way," Carson says.

In the study, the researchers randomly assigned 53 women who had lived with fibromyalgia for at least a year to maintain their existing treatment regimen or take a weekly Yoga of Awareness class (in addition to their current medication and treatment). Patients in the yoga group also received instructional DVDs and were encouraged to practice on their own every day.

At the beginning of the study, the participants rated the severity of their fibromyalgia symptoms -- including pain, fatigue, stiffness, poor sleep, and anxiety -- on a scale from 0 to 100 using a standard questionnaire. After two months, the average score of the women who completed the yoga program decreased from 48 to 35, while the average score in the control group (49) didn't budge.

Though promising, these results need to be borne out by studies with a larger and more diverse group, including men, who make up 10 percent to 25 percent of fibromyalgia patients, says Dr. Robert Shmerling, M.D., an associate professor at Harvard Medical School and the clinical chief of rheumatology at Beth Israel Deaconess Medical Center, in Boston.

Health.com: Men get fibromyalgia too

Future studies will also need to test the yoga program against other types of interventions, rather than the participants' existing treatment. Carson and his colleagues couldn't rule out the possibility that participating in the yoga classes caused a response, similar to the placebo effect, that improved symptoms over and above the effects of the yoga itself.

Still, the study adds to a growing body of evidence that suggests that gentle exercise could be a valuable treatment for fibromyalgia. Yoga reduced the symptoms of fibromyalgia patients in a 2007 study, and in August of this year, a study in the New England Journal of Medicine found that tai chi similarly eased symptoms.

The yoga and tai chi studies could help build interest in alternative therapies for fibromyalgia, Shmerling says. "They will get the neutral doctors and even the doubters into the camp of, 'Why not try this?'"

Most physicians are interested in prescribing a combination of medication and alternative therapies for fibromyalgia, although a new crop of prescription drugs that are expected to become available in the coming years may temporarily shift attention back to medical treatments, Dr. Shmerling adds.

Carson is planning a larger study that will use sensory tests to explore how exactly yoga might improve fibromyalgia. "We believe that it probably changes [central nervous system] responses to pain signals," he says.

Fibromyalgia patients who are interested in trying yoga should look for a class that focuses on low-impact poses and an instructor who has experience working with pain patients, Carson says. And because classes that incorporate other coping strategies are hard to find, he recommends complementing yoga with a meditation course at a community or health center.