When a bullied kid grows up 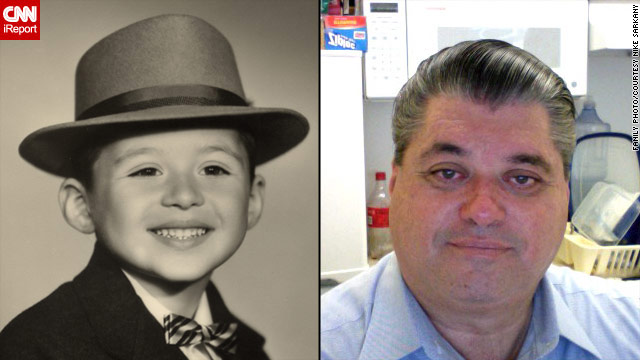 Mike Sarkany never liked having his picture taken again after being bullied as a child. On left: 1958; on right: 2010.
STORY HIGHLIGHTS

(CNN) -- Mike Sarkany has been hiding from bullies for a long time.

Since fifth grade, other children mistreated him at school -- beating him up on the playground, blocking his way in the hall, throwing balls a little too hard. No one believed him. Teachers told him to stand up for himself, but he didn't know how. His solution: Try to avoid anyone who might mistreat him.

Now he's 57, but he still harbors the same anger and fear that he did as a bullied child. He lives alone and tries to minimize interactions with others because he's still wary of being treated cruelly and feels he never learned how to deal with it.

"I just wanted to go to school and enjoy the experience. I just tried to not be involved. I didn't do anything to anybody. The more you try to get away from everybody the more they'd bother you," he said. Read his iReport: Happier times

Bullying involves a repeated, harmful, aggressive act in a situation where there is an imbalance of power, said Cheryl Rode, director of Clinical Operations at the San Diego Center for Children in California.

Victims of bullying may display a variety of symptoms of psychological or physical distress, according to experts.

They may become withdrawn or depressed, and even contemplate suicide, said Rana Sampson, director of development at the San Diego Center for Children and a bullying expert. Anxiety and insomnia are also common.

For young people who are more vulnerable, particularly those who may not have a stable home environment and base of family support, it can be harder to shake off the negativity of the bullying experience, even in adulthood, said Dr. Jeffrey Lieberman, chairman of psychiatry at the Columbia University College of Physicians and Surgeons.

Your stories of bullying from iReport

"Even when they become older and become successful in their business or their professional endeavor, they still may be struggling to sort of overcome feelings of inferiority or being the target of derisive behavior, derisive comments and jokes," he said.

Video: How to stop a bully
RELATED TOPICS

"It really can affect how they feel about themselves and their ability to form relationships, feel safe in the world," Rode said.

More than just a school problem

Some people have found positive lessons to take from having been bullied. Don Harrison, 39, of Charleston, South Carolina, who was tormented in elementary and high school, said he has a tolerance for people who are different and a support for anyone who fights for their rights.

As a teenager, he felt so depressed that he thought about suicide. His parents helped him through it, and he found "inner strength," recognizing that one day things would be better, he said. Read his iReport: 'I was bullied'

"I felt that, 'I wasn't mean to you but you were mean to me, so I'm a better person than you are, I didn't have to do the things you had to do, for whatever reason you felt you had to do them,' " he said.

But others, like Sarkany, struggle with lasting issues of low self-esteem and difficulty forming bonds with other people.

In college, Sarkany made sure he just went to class and did the work without socializing. Having had so many negative relationships in his earlier schooling, he felt he didn't have anything to gain by making friends.

Holding onto a job was a struggle for him, but not for lack of willingness to work. Sarkany has a degree in business administration with a specialty in computer applications and systems, and his many positions have included cook, warehouse supervisor, bank teller, programmer and clerk. He believes he lost several jobs because he didn't want to associate too much with other people, and was told several times, "You just don't seem to fit in." People thought of him as "sneaky, guarded, loner, or unknown quantity," he said.

He has been receiving disability benefits since late 2008 because of an infection of his knees, but has become cynical about workplaces in general.

"I feel I wasn't protected when I was little, and I feel like I'm really not protected now because even if I was out working, I'd have problems where, for some reason, people would want to come up and mess with me because I wanted to be left alone," he said.

He had a strained marriage for 31 years that ended in separation when he went on disability. Only one of his children keeps in touch, he said.

How to spot a child who was bullied

Sometimes the trauma of bullying leads to physical symptoms such as headaches and stomach aches, which are also associated with anxiety, Rode said. The child may simply say "I don't feel good" and not have specific complaints; that is a sign that something may be going on in school.

Parents should be especially alert if their children come home from school with torn clothing, bruises, cuts and scratches, experts said. Loss of interest in schoolwork or a refusal to go to school are warning signs. Ask your child what goes on at lunchtime, Rode said.

If you see these kinds of behaviors and aren't sure what they mean, talk with the child's teacher about what he or she is observing about your son or daughter socially and emotionally, she said. Also, speak with the school counselor.

It's time to get a mental health professional involved if these physical or mental symptoms don't go away for more than a couple of weeks, and if they continue to interfere with a child's ability to go to school, play with friends and engage in other activities, Rode said.

"They take their frustration and emotional upset and direct it toward others," he said. "If you find a bully, it's worth assessing if they themselves have been bullied."

What parents should do

Parents should make sure that a child who has experienced bullying is involved in activities in or out of school that allow the child to have fun and be engaged, so the child feels less socially isolated and starts developing abilities to navigate the world, Sampson said.

One of the first things a parent should do is contact the school, Sampson said. Parents should put their complaints in writing so schools can't deny that they were informed about a problem, Rode said.

It's also good for the child who is bullying to have interventions, Sampson said. Bullies are more likely to go on to get into fights, use alcohol and drugs and end up experiencing significant consequences for their future actions, such as being arrested, Rode said.

Protecting the next generation

Sarkany never acted out against anyone who bullied him, but he finally felt good about resolving that kind of situation when his eldest son was having trouble at age 11.

It was about 20 years ago, but Sarkany remembers well when his son came home and said that another kid had made an "appointment" to beat him up at 3:15 at the bike rack the next day.

When his son went to get his bike the next day after school, Sarkany was hiding in a corner watching. As soon as another kid started threatening his son, Sarkany came out, grabbed the assailant, and took him toward the school office.

"I finally felt like I had the advantage, like I was taking care of something I absolutely hated," he said.

A teacher in the schoolyard came up to Sarkany and asked what was going on. As Sarkany explained, the bully ran away, but Sarkany yelled after him, "I know who you are, expect to be in the office tomorrow morning when you come to school."

The next day, Sarkany and his son went back to school to report the incident to teachers. The other child never bothered his son again.

"It takes something like that for the teachers to do something," he said. "When something is done about it, things can change. But still, school officials, and some employers, still don't do anything about it when it happens on their property."