5 secrets you shouldn't keep from your GYN 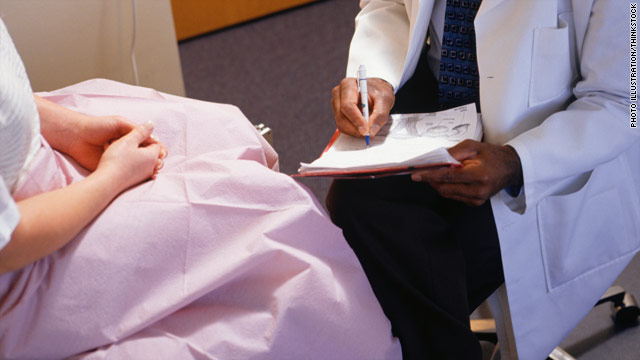 Your gynecologist should know how much you drink and how many sexual partners you have.
STORY HIGHLIGHTS

Even when the secret landed her in the hospital -- twice -- Triebold kept mum, preferring to be silent than healthy.

Triebold's secret: incontinence. For seven years, she went to the bathroom 15 to 20 times a day. A real estate agent who was constantly on the road, she coped by memorizing the location of every McDonald's and Burger King in Destin, Florida.

"I knew where I could dip into the bathroom quickly and dip out," she remembers.

Her other coping mechanism was to drink as little as possible -- usually only about 16 ounces of fluids a day. Two summers in a row, she was taken the emergency room for dehydration after she passed out and started vomiting.

Still, she never told her gynecologist about her frequent need to urinate.

Finally, this summer, her gynecologist figured it out on his own during her annual exam.

"The doctor was looking down there and asked, 'Do you have to go to the bathroom a lot?' I said yes. He said, 'your bladder is about to fall out of your body, and we need to fix it.' "

So why hadn't Triebold told her doctor on her own? She had health insurance, so it wasn't about money.

She says one reason is that years before, she'd had a treatment for incontinence, and it just made the problem worse, so she figured there wasn't much that could help her. She later found out that wasn't true, and is scheduled to have a procedure to fix her problem later this month.

Another reason is that the repeated trips to the bathroom just became normal to her.

But the third reason is that Triebold, 59, was just plain embarrassed to talk about her frequent urges to pee.

"It's not something you talk about much, so you don't say anything," she explains.

Dr. Lissa Rankin, a gynecologist in Mill Valley, California, has heard stories like Triebold's so many times. Whether it's incontinence, romantic affairs or alcohol use, there are so many things women keep from their gynecologists that Rankin was inspired to write a blog post called "Things You Don't Tell Your Doctor (But Should)."

Rankin says patients sometimes feel they'll disappoint their doctors if they admit they're not perfect -- if they confess to a drinking problem, for example, or multiple abortions.

"It makes me so sad, because for whatever reason, we put doctors up on a pedestal and want their approval," she says. "We're afraid to tell them something that might disappoint them."

As Triebold found out, keeping secrets can be dangerous.

Here are five secrets you should never keep from your gynecologist, according to Rankin, author of "What's Up Down There? Questions You'd Only Ask Your Gynecologist If She Was Your Best Friend" and Dr. Roshini Raj, co-author of "What the Yuck?! The Freaky and Fabulous Truth About Your Body" and an assistant professor of medicine at New York University School of Medicine.

1. Who the father of your baby is

"This is a huge issue," Rankin says. "Someone comes in with a husband or long-term partner, but they never tell us they had a thing going on the side. Whose baby is it really?"

Why it matters: Your child's parentage has serious health implications. If your blood type is negative and the father's is positive, you'll need to get injections of Rh immune globulin so you don't endanger future pregnancies. Also, ethnicity matters. For example, if both parents are Ashkenazi Jews or African-American, you'll be especially in need of genetic counseling to discuss diseases common in your ethnic groups.

2. How much you drink

"Be honest," Raj says. "We're not going to judge you. We're asking you because it affects your health."

Why it matters: You have an increased chance of getting breast and some other types of cancer if you drink alcohol, so doctors might screen you more vigilantly if they know you drink.

Also, alcohol interacts badly with certain medications. Raj once prescribed such a drug to a woman who said she didn't drink. When the patient had a bad reaction to the drug, Raj realized she hadn't told her the truth.

3. How many sexual partners you have

Rankin remembers a married patient who took a year to make her confession.

"She said to me, 'I really like you and I don't want you to think anything badly of me, but I'm sending in a friend to be tested for sexually transmitted diseases, and the reason is she and my husband and I all sleep together," Rankin remembers.

"Recently they'd brought in a fourth party, and they hadn't used protection, so they were all freaking out," she says. "And this doesn't happen only in northern California."

Why it matters: If you pretend to be monogamous, your doctor may be less likely to screen you for certain sexually transmitted diseases.

4. Whether you've had an abortion

"People who've had abortions sometimes worry about saying so if they know their doctor is pro-life, or if they don't know where their doctor stands on the issue," Rankin says. While it's understandable to have that worry, it's medically important to tell your doctor if you've had abortions.

Why it matters: If you're infertile, it's important for your doctor to know about past abortions for two reasons. One, it indicates that at least in one point in your life, you were fertile and "the plumbing works," Rankin says.

Secondly, the infertility might be caused by infection or scar tissue that resulted form the abortion, she adds.

Also, multiple abortions could put you at a higher risk for miscarriage or premature birth, she says.

Finally, if you're about to have surgery on your cervix or uterus, your doctor needs to know about prior abortions, as scar tissue might make the surgery more difficult.

Karen Taylor-Good, a Grammy-nominated singer/songwriter, sometimes wonders why her sex drive isn't what it used to be.

"To this day, I'm still shy about talking to my doctor about this issue," she says. "I think we as women have to be more open. ... You can ask, 'Why am I not the hot, passionate mama I used to be?' and not be embarrassed about it."

Why it matters: A declining sex drive could be a sign of a hormonal problem, such as thyroid disease, or of depression, and you don't want to ignore either, Raj says.

Also, besides a visit to the doctor, there are several tips and treatments available, Rankin says, including intimate dates, role playing and arousal aids.

But a reluctance to discuss private issues isn't the only reason for silence. The gynecologist's office isn't always well-suited for intimate talks.

Taylor-Good memorialized a visit to the gynecologist in a humorous song. (The chorus goes: "I got the OBG why me blues / My feet are in the stirrups / Wish someone else was in my shoes." ) And she knows now that the choice of gynecologist is key.

"The trick is to shop around for the gynecologist that you can sit down with like a girlfriend," she says.

If your gynecologist talks to you about intimate matters while you're in a paper gown sitting on an examining table, ask for a different setting, Rankin suggests.

"That's just not an empowered position," she says. "When a woman comes into my office, we sit on two red leather chairs across from each other. I give them a hug. I offer them a cup of tea. I ask them, 'if your vagina had a voice, what would it say?' "