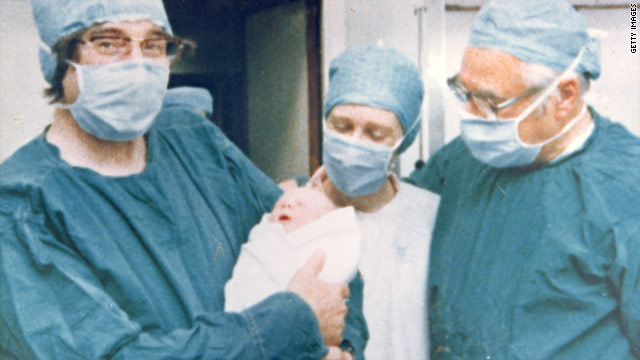 (CNN) -- The "father of the test tube baby," Robert G. Edwards, won the Nobel Prize for medicine on Monday, the awards committee announced.

His contributions to developing in vitro fertilization (IVF) "represent a milestone in the development of modern medicine," the committee said.

"As early as the 1950s, Edwards had the vision that IVF could be useful as a treatment for infertility," which affects about 10 percent of all couples worldwide, the commitee said.

His efforts were finally crowned by success on 25 July, 1978, when the world's first 'test tube baby' was born," the committee said. Louise Brown, who was born in Oldham, northern England, has since married and given birth to a son, who was conceived naturally.

His work has led to the birth of about four million babies, the committee said in praising his work. Share your stories about IVF

The announcement marks the beginning of a week of prizes, with physics, chemistry, literature and peace coming in the next four days. The prize in economics will be announced next Monday.

Elizabeth H. Blackburn, Carol W. Greider and Jack W. Szostak shared the $1.4 million prize "for the discovery of how chromosomes are protected by telomeres and the enzyme telomerase."

Understanding how chromosomes are protected against degradation could shed light on human aging and diseases, including cancer.