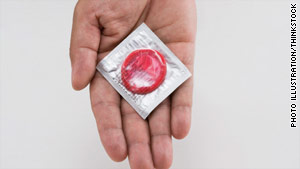 Seventy to eighty percent of teens said they used condoms the last time they had intercorse.
STORY HIGHLIGHTS

(CNN) -- In one of the largest studies on sexual behavior in America, Indiana University investigators have found that more teens than adults use condoms -- and that sexual activity in the U.S. involves much more than the missionary position.

The findings appear in a special edition of The Journal of Sexual Medicine in the form of nine distinct studies. All were funded by Church and Dwight, the company that makes Trojan condoms. Researchers collected information online from 5,865 people ranging in age from 14 to 94.

The study authors asked men and women about 41 combinations of sexual acts, as well as whether they used condoms. Church and Dwight approved the information before its release.

Knowledge Networks, a polling firm, conducted the study. Researchers chose a nationally representative sample of adolescents and adults from across the U.S. by mail. Once selected, people were interviewed online from March to May of 2009.

Polling people online seemed the best way to get information about an intensely personal subject without encroaching on the participants' privates lives, investigators said.

Some researchers were struck by the range of sexual activities people reported.

"The surprise we found in this survey is the variability and diversity of the way people conduct their sex lives," said Logan Levkoff, a sexologist at New York University and member of the Trojan Sexual Health Advisory Council, which the company says "provides an ever-changing, growing resource of current sexual health and cultural information."

"Men might be a little clueless when it comes to their partners and orgasms," said Pepper Schwartz, sexologist at University of Washington and a member of the Trojan Sexual Health Advisory Council. "As a sexologist, I believe this is important information that any sex therapist can use in their treatment. "

Dr. Dennis Fortenberry, a study investigator at Indiana University, said 4 percent of males between aged 14 to 17 reported having sexual intercourse compared with 9 percent of females of the same age. That number, however, jumped to 40 percent for male teens 17 to 18 years old and 36 percent for teenage girls at that age.

The study found that condom use was highest among adolescents, especially among black and Hispanic teens, said Michael Reece, director for Sexual Health Promotion at the Indiana University and also a member of the sexual advisory council at Church and Dwight.

Teens reported being well aware of sexually transmitted diseases and pregnancy. Seventy to eighty percent of teens said they used condoms the last time they had vaginal intercourse, Reece said.

"Condom use has become a big player," he said.

Researchers involved in the survey said it was the first time since the early 1990s that such a study asked so many people about so wide a range of sexual behaviors.

The study also revealed a range of views on what intimate acts constituted sex.

Researchers acknowledged that Church and Dwight was involved in developing the poll. In all nine studies, conflicts of interest were noted because the primary researchers worked for Indiana University and also sat on Trojan's sexual advisory council.