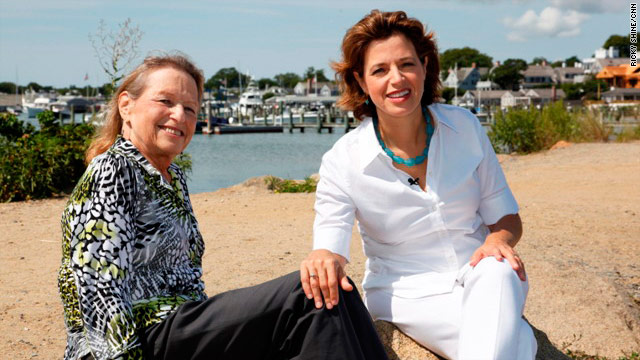 Elizabeth Cohen's mother, Sheila Schwartz, taught her that it's not always important to be a "good" patient.
STORY HIGHLIGHTS

(CNN) -- My mother, Sheila Schwartz, is a firecracker. As a lawyer, social worker, wife, mother of four and grandmother of 11, she's always on the go -- working, caring, loving life. About 10 years ago, when my mother was around 60, something suddenly changed. She began feeling tired, achy and dizzy, and her blood pressure was slightly high even though she was on blood pressure medication. Her internist tinkered with the dosage, but the blood pressure wouldn't budge.

The internist then told my mother her blood pressure would go down if she just stopped working so hard.

"He told me the high blood pressure and the other problems came from being so busy," she remembered. " 'Slow down,' he said, 'and you'll be OK.' "

This response sounded strange to me. My mother certainly worked hard -- and had done so happily -- but she'd worked hard her entire adult life, and until then she'd been just fine. Why all of a sudden would her long days cause her to feel ill?

My mother's condition continued to deteriorate. While vacationing in another city, she felt especially weak and went to a local doctor. He told her he thought she might have a problem with her adrenal glands, and when she returned home, she checked in with a nephrologist, who ran some tests. He found out she had an adrenal abnormality, which was wearing out her kidneys.

Quiz: Are you a 'good' patient?

Why not to be a 'good patient'
RELATED TOPICS

If my mom's internist had ordered a blood test, he most likely would have caught the problem, and it could have been treated easily with a simple surgical procedure. Since the problem was allowed to fester, she ended up needing a kidney transplant, which she received last year.

There are two lessons learned from my mother's experience. One, when a doctor tells you to just relax to get rid of real, physical symptoms, it's probably time to find a new doctor.

Second, it doesn't pay to be a "good" patient. My mother grew up in a time when doctors were authority figures not to be questioned and to be trusted 100 percent.

In this case, as in many others, it pays to be a "bad" patient. If my mother had pushed her doctor, asking him to re-think his diagnosis, she probably would have annoyed him, but it would have been worth it.

Click here for a quiz to tell you whether you're a "good" patient, and remember these three golden rules of being a "bad" patient.

1. Ask lots of questions. If you don't understand something, ask for clarification, and if you still don't understand, ask again. The doctor or nurse might be visibly annoyed, but that shouldn't stop you. Remember, your health depends on your ability to comprehend what the doctor is telling you.

2. Don't worry whether your doctor likes you. If you hesitate to do anything that might upset the doctor, such as asking lots of questions, you're putting your health in jeopardy. While it's a natural inclination to want to be liked, your health comes first and your popularity second.

3. Remember that this is a business transaction. You're paying the doctor for a service; you're not in a popularity contest. Of course, you're respectful of the doctor, just as you're respectful to a waitress or your car mechanic, but you don't owe it to your doctor to be the perfect patient.