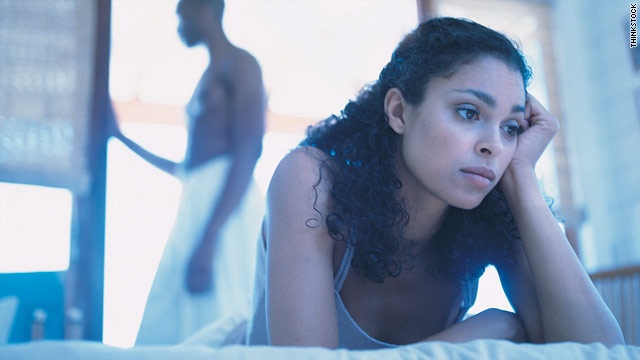 Studies show that 7 out of 10 breast cancer survivors experience sexual problems in the two years after the diagnosis.
STORY HIGHLIGHTS
RELATED TOPICS

(Health.com) -- Many middle-aged women report sexual problems, including a loss of libido and a less-than-satisfying sex life. Now a new study suggests these problems are even more common among women who have had breast cancer.

In fact, 7 in 10 breast cancer survivors experience sexual problems in the two years after their diagnosis, according to the study, published this week in the Journal of Sexual Medicine.

Sexual problems after breast cancer treatment are "a hidden issue that women have a real reluctance to discuss," says Dr. Christine Derzko, M.D., a professor of ob-gyn and endocrinology at the University of Toronto, who was not involved in the new research. "We have to empower women to have the confidence to ask about this. And we have to enlighten physicians to the fact that it is an issue."

These problems can be caused by cancer drugs that block the production of estrogen (most notably Arimidex and other aromatase inhibitors), treatment-triggered menopausal symptoms, or body-image issues related to mastectomy or other surgery, researchers say.

Breast cancer is the most common cancer among women in the U.S., with some 200,000 new cases diagnosed each year. Thanks to improved treatments, more women than ever are surviving breast cancer.

That's good news, but it also means a growing population of survivors -- 2.4 million women in the U.S. alone -- who are coping with the fallout from diagnosis and treatment.

In the study, researchers surveyed more than 1,000 Australian women under age 70.

More than 80 percent of the women reported enjoying a satisfying sex life before battling breast cancer, but roughly two years after their diagnosis, 70 percent were having significant problems in the bedroom. (As the researchers point out, the women may have remembered their pre-diagnosis sex life as being better than it seemed at the time.)

By contrast, the rate of sexual problems (including low sex drive) among adult women in the population at large has been estimated at about 40 percent to 45 percent.

The findings did not surprise the researchers, who had been hearing complaints about sexual problems from their breast cancer patients.

"Our impression from seeing women in the clinic was that women were experiencing a significant increase in sexual function problems following treatment," says the lead author of the study, Mary Panjari, Ph.D., a research fellow in the women's health program at Monash University in Melbourne, Australia.

What, exactly, is behind the problems between the sheets? The psychological effects of surgery appear to be one factor.

Health.com: New breasts to go with my cancer-free life

Estrogen-blocking endocrine therapy is another likely culprit. The researchers found that the women taking aromatase inhibitors were 50 percent more likely to develop sexual problems than those not on the drugs. (Tamoxifen, another standard breast cancer treatment, doesn't lower estrogen levels to the same extent and showed less of an effect on sexual function.)

Although aromatase inhibitors are good for suppressing tumors, they can also induce or exacerbate sex-stifling menopausal symptoms ranging from vaginal dryness and sensitivity to aches and pains.

"These new drugs are a large part of why we have so many women beating the cancer," says Derzko. "We have to continue helping them survive, but we also have to help them survive well."

Menopausal symptoms such as hot flashes and night sweats -- which 77 percent of the women in the study reported having -- were also strongly linked to sexual problems. Women with those symptoms were nearly twice as likely as women without them to report problems.

Health.com: 8 reasons sex is better after 50

Today's breast cancer survivors have a growing array of aids for improving their sex life, including non-hormonal treatments for hot flashes, vaginal moisturizers, and lubricants. Researchers are even investigating libido-boosting drugs they hope may one day be the female equivalent of Viagra.

Doctors should then raise the potential sexual side effects of breast cancer treatment, Sadovsky says.

Those conversations should include a woman's spouse or partner, Panjari says. Partners "need to understand that they are not being rejected emotionally and sexually, but rather the loss of desire and arousal is commonly a treatment effect," she says. "Through counseling, partners can become aware that the affected woman may be experiencing lowered sexual self esteem because of their changed body image."

Health.com: How to help a loved one cope with breast cancer

The important thing, Derzko says, is for doctors and patients alike to acknowledge that sexual problems are a common problem after breast cancer, and to work together toward a solution.

"It's hard enough for any woman to express sexual concerns," she says. "Add to that the problems of someone who has had breast cancer, and it becomes even more of an issue."