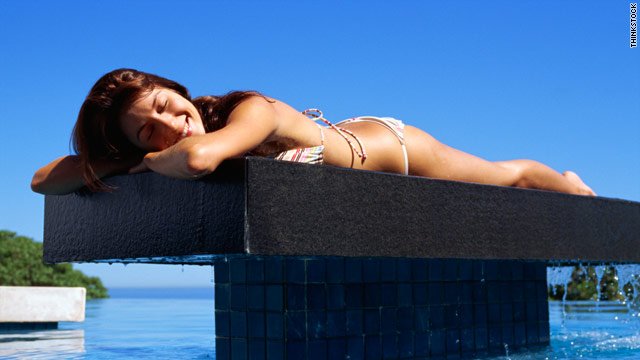 People who use sunless tanning products are more likely to get five or more sunburns during the summer.
STORY HIGHLIGHTS
RELATED TOPICS

(Health.com) -- Eden Lewis prefers to be "a bronzed goddess instead of a pasty Snow White," so she gets a spray tan before a vacation or an important social event.

The 18-year-old college freshman in Boston likes the convenience and instant results of spray tans.

"And most of all," she says, "I know I won't look like a shriveled prune when I'm older because of careless sessions in a tanning bed."

Health.com: 7 ways you're aging your skin

Lewis is typical in many ways. According to a new study in the Archives of Dermatology, 11 percent of teens in the U.S. have used spray tans and tanning lotions. And the teens who use these so-called sunless tanning products tend to be older teenage girls who, not surprisingly, think the sun-kissed look makes them look more attractive.

But many people who get tans from a bottle don't share Lewis's aversion to tanning beds.

In fact, the study showed that people who use sunless tanning products are about 2.5 times more likely than those who don't to visit tanning salons and get five or more sunburns during the summer -- both of which raise the risk of skin cancer and prematurely aged skin.

In short, many teenage spray tanners are a bit like a cigarette smoker who chews nicotine gum to supplement -- rather than kick -- her habit.

"If you want to look good for prom, sunless tanning could be helpful and [could] deter you from indoor tanning or staying longer at the beach or pool for that tan look," says the lead author of the study, Vilma Cokkinides, Ph.D., a researcher at the American Cancer Society, in Atlanta.

However, Cokkinides adds, the findings suggest sunless tanning products may be just another way for diehard tanners to get that coveted bronzed look.

"There are also those that are more chronic users, so we need to understand how these products are used by different groups," she says.

Health.com: Find the best self-tanner for you

Most sunless tanning products contain dihydroxyacetone, a naturally occurring substance that interacts with amino acids in the skin to create the appearance of a tan, minus the cancer and cosmetic risks associated with ultraviolet light.

Another study in the same issue of the Archives of Dermatology suggests encouraging women to use sunless tanning products may reduce unsafe sunbathing if the women are warned about the risks of tanning.

In that study, researchers at the University of Massachusetts recruited 250 women who were sunbathing on public beaches. The women were divided into two groups. Half of them received free cosmetics, while the other half received free sunless tanning products and information about skin cancer and the benefits of sunless tanning.

They also posed for ultraviolet photographs -- a type of photography that reveals skin damage not visible to the naked eye.

After two months, the women who were urged to use sunless tanning products were sunbathing less frequently, had experienced fewer sunburns, and were more likely to wear protective clothing in the sun compared to the women in the control group.

After one year, the women who received sunless tanner were still sunbathing less frequently, but there were no other differences between the two groups.

Dr. June K. Robinson, M.D., a dermatologist at the Northwestern Feinberg School of Medicine, in Chicago, says that sunless tanning may be an effective "harm-reduction strategy for event tanners and those who tan because they feel it looks good."

However, urging the use of sunless tanning products is not likely to be an effective strategy for people who tan for other reasons, such as to socialize or to relieve stress, says Robinson, who wrote an editorial accompanying the pair of studies.

Dr. Heidi Waldorf, M.D., the director of laser and cosmetic dermatology at Mount Sinai Hospital, in New York City, tells her patients about the dangers of UV light and recommends spray tans to her patients -- especially those who insist on being tan for a prom or wedding. But she's not sure diehard tanners are getting the message.

"The benefits may only be short term for teens," she says. "Even with the emphasis on education in my practice, some girls still show up tan."