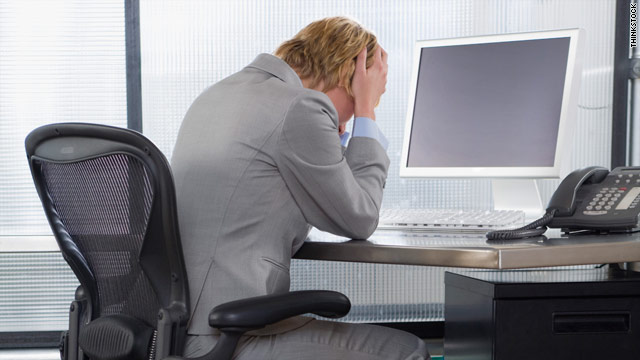 A happy employee is more productive, so it makes sense for employers to help people find services if they are in need.
STORY HIGHLIGHTS
RELATED TOPICS

(Health.com) -- By all appearances Sandy was successful and content. At 30 years old, she was in a senior position at a major media company in Boston -- and she was a happily married new mom to boot. But her life was less charmed than it seemed.

Sandy (not her real name) had become seriously depressed after the birth of her child. And although she got some relief from antidepressants, the drugs would falter every so often, plunging her into a deep, dark mood.

"It was hard to get up and go to work," she says. In fact, there were times when Sandy simply couldn't drag herself into the office and called in sick. She was sick -- but she didn't tell her employers with what.

Sandy was afraid that if her colleagues knew about her depression, they would start to view her typical behavior -- being outspoken in meetings, say -- as a symptom of her illness.

"It's almost like people thinking you have PMS or something, and discounting what you're saying," she says.

It's a valid concern. The stigma surrounding depression is not what it was a generation ago (thanks to greater public awareness and the mainstreaming of antidepressants), but it remains strong enough that most depressed employees would probably hesitate to reveal their condition to bosses and coworkers for fear of being marginalized professionally or being seen as weak.

Some workers may even worry about jeopardizing their jobs -- especially in the current economic climate.

"I think we've come a long way in terms of identifying that depression is an important issue in the workplace," says Dr. Michelle Riba, M.D., a professor of psychiatry at the University of Michigan, in Ann Arbor. "But for the individual who's working in an office or another situation, one really needs to think about why any medical condition would be discussed. Not that there's anything wrong with disclosing, but one has to be really clear about what one hopes to gain."

The Americans with Disabilities Act prevents employers with 15 or more employees from discriminating against people with serious health problems (including depression), and it requires them to accommodate disabled employees. In order to be protected by the law, however, employees must disclose the nature of their disability to their employers.

Health.com: Will your depression diagnosis protect you from discrimination at work?

The decision whether to inform your employer and colleagues about your depression (or another mental illness) should not be taken lightly. As Riba suggests, you should have a compelling reason for doing so and should know in advance what you need from your employer to do your job effectively. And you'll need to come to grips with the lingering stigma of mental illness.

Sandy's doctor told her that depression is a medical condition just like diabetes -- and she agrees, to a point.

"If I had diabetes I would probably tell my company," she says. "But I've never told them this."

Like any serious health problem, depression requires professional help. People who are depressed should ask their doctors about therapy, antidepressant medications, and other treatments before they consider raising the issue with their employer, says Riba, who is also the associate director of the University of Michigan's depression center.

"The first thing is for people who feel they're depressed to be evaluated and get good treatment and work with their mental health provider and their primary care provider," she says.

If depressed people aren't receiving appropriate treatment, Riba says, they may turn to counterproductive behaviors such as drinking.

Primary care providers aren't the only source of help. If your company has an employee assistance program -- an in-house service designed to help employees cope with personal problems that are affecting their work -- you may be able to get counseling and a referral to a mental health specialist without your colleagues knowing about it.

Getting proper treatment is essential, even though it may mean more expensive premiums if at some point you are required to purchase a health-insurance plan on the open market. Due to the national health-care legislation passed last year, however, insurance companies won't be able to deny you coverage for depression or any other preexisting mental health condition beginning in 2014.

Should you disclose your depression?

Clare Miller, the director of the American Psychiatric Foundation's Partnership for Workplace Mental Health, which helps employers develop effective approaches to mental health, urges people who have been diagnosed with depression to think carefully about what they are trying to accomplish by revealing their condition to their boss or human resources department.

"It's not an easy, 'Yes, you should do this' or 'No, you shouldn't.' I think it really depends," Miller says. "You want to think through what the purpose of the disclosure would be."

For instance, disclosure may be in your best interest if you need special accommodations to do your job, such as the option of starting later in the day because you're on a new medication that makes you sleepy in the morning or taking sick leave if you are having a particularly tough time emotionally.

Disclosure is probably also a good idea if depression if causing your job performance to suffer noticeably, says Miller.

"But try to do it early in the game as opposed to waiting until you get a bad performance review," she adds. (And you should be prepared to provide documentation from your doctor, as many companies will require it.)

The atmosphere at your workplace is another important consideration. Although the stigma related to depression isn't as bad as it used to be, Miller says, it definitely still exists.

"A lot of it is going to depend on the culture at your company," she says. Some workplaces are more tolerant and progressive than others.

Health.com: Why the stigma against depression at work is real

People who disclose their depression to colleagues -- or even just one colleague -- should be prepared for gossip, says Riba.

"One should assume that if one tells one person, others will find out," she says.

How depression-friendly is your company?

If you decide to tell your bosses and coworkers about your depression, the good news is that it will likely be easier than it was 10 or 20 years ago.

Employers are increasingly aware that promoting employee mental health is good for business, Miller says. A happy employee is more productive, so it makes sense for employers to help people in need of services to find those services.

Major depressive disorder is the leading cause of disability among adults 15 to 44 years old, affecting nearly 7 percent of adults in the U.S. each year, according to the National Institute of Mental Health. And depression causes an estimated $23 billion in lost productivity in the U.S. each year.

But that doesn't mean you should expect your employer to commiserate or bend over backward to help you. Even at the most supportive companies, navigating mental health benefits can be tricky.

PPG Industries, a Pittsburgh-based supplier of coatings, glass, fiberglass, and chemicals that employs 34,000 people, has been recognized by Miller's group for its commitment to employee mental health.

Dr. Alberto Colombi, M.D., the corporate medical director at PPG, says that an employer's main responsibility is to destigmatize depression, encourage self-screening, and help connect employees in need with the appropriate resources.

"Rather than be controlling, employers should provide a supportive environment," Colombi says. "You want to make sure [employees] know where the door is and how to open the door."

Under the new Mental Health Parity and Addiction Equity Act, which went into effect earlier this year, companies with 50-plus employees are prohibited from charging higher co-pays or deductibles for mental-health and substance-abuse services than they do for other medical treatments.

The law only guarantees parity in coverage, however, not integration of physical and mental health care, which is what many patients need, Colombi says.

For real progress to be made in destigmatizing and treating mental illness, Colombi says, workplaces -- and society as a whole -- need to stop thinking of mental health as separate from physical health.

"The issue is mental well-being as part of wellness," he says.

A long way to go

Four years ago, Sandy received a new diagnosis: bipolar II, a form of bipolar disorder with less severe episodes of mania. Her doctor prescribed mood stabilizers, which have helped reduce the bouts of depression she used to suffer about once a year.

"I'm very careful," she adds. "I make sure to see my doctor all the time. I make sure I'm really monitoring this."

Health.com: Bipolar is one disorder with many faces

Sandy, now 44, is launching her own business. As part of her preparation, she broached the subject of her depression in a meeting with her business partner -- the first time she had ever revealed her illness in a professional setting.

"If we're going to be partners here, I feel that you should know this about me," Sandy told him.

Her partner took the news in stride and appreciated her candor. But that doesn't mean Sandy will be quick to reveal her condition if her employment situation changes. If she ever does go back to working for someone else, she wouldn't come clean about her history of depression.