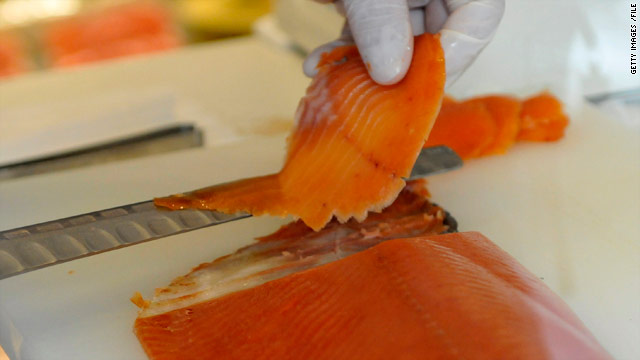 (CNN) -- The U.S. Food and Drug Administration will hold a hearing Monday as it considers whether to approve genetically engineered salmon for human consumption.

If approved it would be the first genetically modified animal permitted by the food safety agency.

A company, AquAdvantage Salmon, has injected growth hormones into Atlantic salmon that enable the fish to reach maturity in half the normal growth time, 16 to 18 months, rather than 30 months.

The FDA in an analysis dated Monday, wrote: "We therefore conclude the food from AquAdvantage Salmon that is the subject of this application is as safe as food from conventional Atlantic salmon and that there is a reasonable certainty of no harm from the consumption of food from this animal."

But critics worry about the possible health effects of eating fish containing the growth hormone.

"It's impossible to talk about the risks other than saying they haven't been properly assessed, other than process has been rushed and we don't know," said Wenonah Hauter, executive director of Food and Water Watch. She added that the FDA is a "very stressed agency" with all the latest recalls and outbreaks, that it "can't ensure the safety of the foods they currently regulate."

Hauter said that the FDA has relied too heavily on information provided by AquAdvantage and that there should be a more extended time given to thoroughly vet and discuss risks.

A final decision is expected in a few weeks.