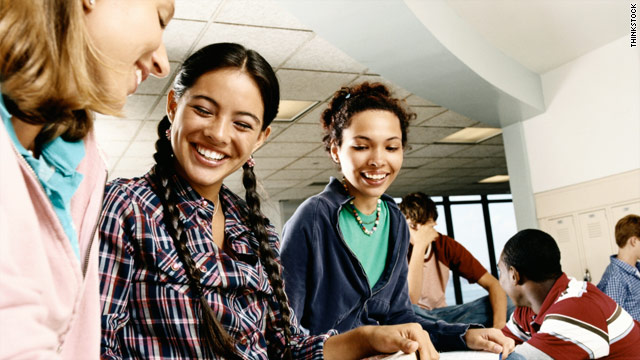 Studies show that people at the center of their social networks are often the first to come down with the flu.
STORY HIGHLIGHTS
RELATED TOPICS

(Health.com) -- As any teenager will tell you, being popular is totally awesome. But it has a downside: According to a new study, popular people tend to catch the flu first.

When the flu is going around, people at the center of social networks -- those who are named as a friend by others -- come down with the virus about two weeks earlier than a randomly selected group of people, the study found.

Monitoring the health of these socially connected people could serve as an early warning system for flu epidemics and outbreaks of other infectious diseases, the researchers say.

The study, which appears in the journal PLoS ONE, was based on a concept known as the "friendship paradox": When people are asked to name their friends, their friends tend to have more social contacts than they do.

"If you take a random group of people and you ask them to nominate their friends, their friends will be more central in the network than they are," says one of the study's authors, Nicholas Christakis, M.D., a professor of medical sociology at Harvard Medical School, in Boston. "That means you can identify central individuals who are more likely to catch contagions earlier."

In the study, Christakis and his co-author, James Fowler, Ph.D., a professor of medical genetics at the University of California, San Diego School of Medicine, chose 319 Harvard undergraduates at random and asked them to name their friends, which yielded a group of 425 students who were named at least once.

More on their research: Obesity, STDs flow in social networks

Roughly one-third of the students reported catching the flu in the fall and winter of 2009. Students in the "friends" group were diagnosed 14 days earlier, on average, than those in the randomly chosen group. And the epidemic peaked among the friends group a full 46 days before it peaked in the general population of students.

Philip Polgreen, M.D., an assistant professor of medicine and epidemiology at the University of Iowa, in Iowa City, called the findings "promising and exciting."

Health.com: What ails you: cold, flu, or something else?

Identifying a group of central individuals using the method described in the study would provide a simple way of tracking and fighting epidemics, especially in self-contained settings such as college campuses and military bases, he says.

"Checking for disease among the 'Kevin Bacons' is an appealing concept," Polgreen says, referring to the actor who is famously connected to other stars through fewer than six degrees of separation.

Public health officials already use several methods to track influenza outbreaks, but the data tends to be a week or two behind the actual epidemic. Even two weeks of warning would help doctors diagnose cases of the flu earlier and urge still-healthy people to adopt preventive measures, says Polgreen, who has studied social networks and infectious disease but wasn't involved in the new research.

Health.com: Never mind the flu -- loneliness is going around

Although the study looked at a relatively small group of college students, there's no reason social networks couldn't be used to monitor flu epidemics on a city, state, or national level, Christakis says.

Justin Lessler, Ph.D., an influenza expert and research associate at the Johns Hopkins Bloomberg School of Public Health, in Baltimore, is skeptical that the flu tracking method the researchers propose would be as useful as they claim, however.

"Their idea and the way they attacked it are very clever," Lessler says. But, he adds, the study doesn't prove that their method would be any better -- or more cost-effective -- than flu surveillance techniques already being used.

"It's not clear that it gives any benefit over just looking at health care facilities and waiting for people to come there, which is going to be a lot cheaper," he says.

This is merely the latest study from Christakis and Fowler to examine the spread of health conditions and behaviors through social networks. In the past several years, the researchers have published similar studies on obesity, alcohol consumption, smoking, depression, happiness, and loneliness.