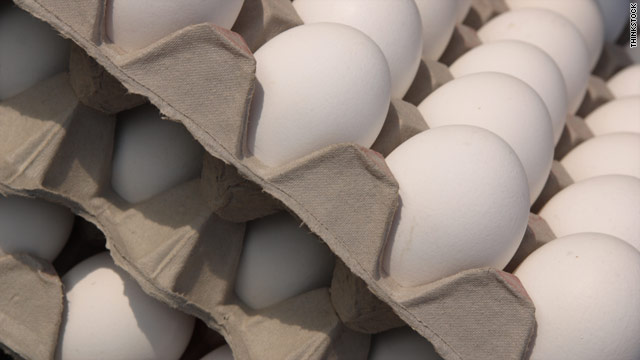 There were 426 cases of salmonella contamination at Wright County Egg in the two years before the egg recall.
STORY HIGHLIGHTS
RELATED TOPICS

The Egg Safety Center has a complete list of recalled eggs, their expiration dates, and brands. Here are safety tips and more information.

(CNN) -- Lab tests found hundreds of cases of salmonella contamination at an Iowa farm in a nearly two-year period before the outbreak that prompted a massive recall of eggs this summer, congressional investigators said Tuesday.

Wright County Egg is one of two farms at the center of the massive recall. In a letter to its owner, Austin "Jack" DeCoster, leaders of the House Energy and Commerce Committee said tests confirmed 426 cases of salmonella contamination between September 2008 and the past July, and 73 were "potentially" positive for the strain of the disease involved in this year's outbreak.

The committee's Democratic leaders asked DeCoster to explain those findings when he appears at a September 21 hearing. They also called on him to explain why those test reports weren't included in material the company has provided to Congress so far, and demanded that the company produce "all documents relating to your response to the test results" by Wednesday.

"Despite the committee's specific request, your response on September 11, 2010, did not include the 73 potentially positive results for Salmonella enteritidis," Energy and Commerce Committee Chairman Henry Waxman and investigations subcommittee chairman Bart Stupak wrote. "It also did not show whether Wright County Egg took appropriate steps to protect the public after receiving the positive test results."

Wright County Egg and another Iowa producer, Hillandale Farms, were forced to recall about 550 million eggs in August after health officials linked them to the salmonella outbreak, which has so far been blamed for more than 1,500 illnesses across the United States.

Wright County Egg and other operations owned by the DeCoster family have come under increased scrutiny since the outbreak. In a written statement responding to the letter, the company said it previously pledged to "fully respond" to the committee's requests for documents.

"At that time, we also indicated that our response was ongoing," it said. The company said it was "terribly disappointed" to find positive tests for salmonella in its eggs, but said it provided results of those voluntary tests "as soon as those results were available."

"We believe our open communication about our forthright efforts to compile testing data and provide documents as requested is consistent with our ongoing cooperation with this investigation," it said. "We have provided the committee with additional testing documentation today and will continue to do so as we restore past testing records."

Salmonella occurs naturally in chickens, but Food and Drug Administration inspectors reported in August that neither Wright County nor Hillandale fully followed their plans to prevent Salmonella enteritidis.

Federal investigators reported finding salmonella bacteria in chicken feed and in barn and walkway areas at the farms, as well as rodents, piles of manure, uncaged birds and flies too numerous to count, the FDA said.