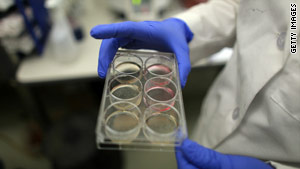 The lower-court decision that bars the use of publicly funded stem-cell work had stunned the Obama administration, which had vowed to appeal.

"The government is seeking a stay of the court's injunction to prevent the irreparable human and financial harm that could occur if these life-saving research projects are forced to abruptly shut down," said Justice Department spokeswoman Tracy Schmaler.

"The court's order causes irrevocable harm to the millions of extremely sick or injured people who stand to benefit from continuing research as well as to the taxpayers who have spent hundreds of millions of dollars on this research," a Justice Department statement said.

The Justice lawyers filed the notice of appeal and the proposed stay with U.S. District Court Judge Royce Lamberth, who had granted the injunction sought by plaintiffs opposed to research in which embryos had been destroyed.

"We've said from day one that embryonic stem cell research is a top priority for this administration, and we're going to do everything possible to prevent the potentially catastrophic consequences of this injunction," said White House spokesman Reid Cherlin.

The government said if Lamberth has not granted the stay by September 7, the government would "present their stay request to the Court of Appeals the following day".

In that event, a three-judge panel of the U.S. Circuit Court for the District of Columbia, would likely rule quickly on the request for a stay, while it schedules briefs and arguments on the legal merits of the case which may take months.

Government lawyers filed the appeal on behalf of Health and Human Services Secretary Kathleen Sebelius, the National Institutes of Health, and its director, Francis Collins.

Collins said NIH has invested over $546 million in taxpayers' money in human embryonic stem cell research since 2001. In a 12-page statement attached to the appeal, Collins said the court order prevents NIH from providing $54 million in funds to 24 human embryonic research projects currently under way that were expecting to receive funds within the next month. He said another 199 grants would be discontinued for projects which were to be awarded funding after the September 30 deadline ordered by the court.

Judge Lamberth had ruled that all embryonic stem-cell research involves destroying embryos. He said a provision of federal spending bills "unambiguously prohibits the use of federal funds for all research in which a human embryo is destroyed".

The legal arguments with which Lamberth sided were brought by researchers opposed to use of embryonic stem cells. Plaintiffs included a group that seeks adoptive parents for human embryos created through in vitro fertilization, the non-profit Christian Medical Association and others.