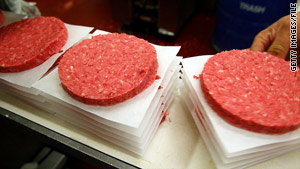 The USDA says it believes the meat was shipped to certain BJ's Wholesale Club stores in eight states.
STORY HIGHLIGHTS

(CNN) -- Cargill Meat Solutions Corp. has recalled about 8,500 pounds of ground beef that may be contaminated with E. coli, the U.S. Department of Agriculture announced Saturday.

The move came after three people, two in Maine and one in New York, were identified as becoming ill from a strain of E. coli, the government said.

"It was a relief it wasn't more serious," he told CNN.

The recalled ground beef was shipped June 11 to distribution centers, where it was repackaged into consumer-size packages and sold under different retail brand names. The USDA did not identify the brands.

The USDA's Food Safety and Inspection Services, which said it became aware of the problem on August 5, "determined that there is an association between the ground beef products subject to recall and the cluster of illnesses in the states of Maine and New York."

Saturday's statement identified the strain as E. coli 026, which can cause bloody diarrhea, dehydration and, in severe cases, kidney failure.

The government "strongly encourages consumers to check their freezers and immediately discard any product subject to this recall."

The government lists the recall as Class 1, meaning "there is a reasonable probability that the use of the product will cause serious, adverse health consequences or death."

Consumers with questions regarding the recall should contact the Cargill consumer line at (877) 788-4953.

Martin said Cargill is working with the USDA to learn what happened.

"We decided to take swift action to do the right thing," he said of the recall.