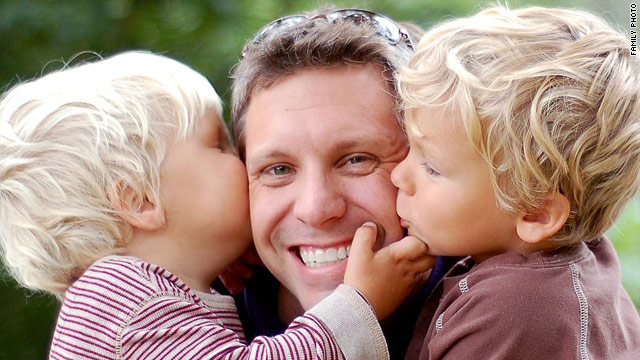 Ryan Arnold, 34, who was healthy when he donated 60 percent of his liver to his brother, died four days after the surgery.
STORY HIGHLIGHTS

(CNN) -- Chad Arnold clearly remembers the day he received the call from his older brother, Ryan, telling him they were a perfect match for a liver transplant.

"You feel a lot of things at that point. Relief, gratefulness to God and to Ryan," says Chad, who suffers from an incurable liver disease called primary sclerosing cholangitis.

Chad told his story to Ginger Delgado, a reporter for KDVR in Denver, Colorado.

"After that, you wrestle with a lot of guilt, like I really don't want to bring him through this," Chad added. "But he shut me up pretty fast, and said, 'Well, you would do it for me, wouldn't you?'"

The Arnold family had invited KDVR to be with them the day of the surgery when it took an unexpected and devastating turn. Ryan Arnold, 34, who was completely healthy when he went in to donate 60 percent of his liver to his brother, died four days after the surgery. He is survived by a wife and three young sons.

In a statement, the University of Colorado says, "Despite the risks, Ryan selflessly made the decision to give part of his liver to his brother, Chad. We will learn everything we can from this to keep making the phenomenal gift of transplant safe for donors as well as recipients. We will continue working to improve this vital, life-changing program, which pioneered liver transplants 40 years ago. Ryan's passing will not be in vain."

"This is a story about a man who is deeply convicted by his faith and because of that, what he did for me was just sort of a normal thing that he did for people," Chad, 38, told KDVR after his brother's death. "Ryan is the hero in this."

Advocates for living donors say one should seriously weigh all the risks before deciding to donate a kidney or section of the liver.

Nationally, two out of every 1,000 liver donors die as a result of the surgery , according to OrganDonor.gov, a part of the federal Department of Health and Human Services. From 1996 to 2006, there were 3,016 living liver transplants in the United States.

Between October 1999 and December 2007, 14 people died within a month after donating a kidney, according to a study commissioned by the National Kidney Foundation. During that time, 51,153 people donated a kidney.

Cristy Wright said she didn't do much research before donating a kidney to her sister, Mary Edington.

"Normally I'm a big research hound -- an info junkie," says Wright, 39, a freelance writer who lives in Copley, Ohio. "But with the transplant, I made the decision emotionally. It was pretty impulsive. It was about loyalty. I love my sister and wanted to help her."

Since donating her kidney, Wright started a website, LivingDonor101.com, to help get information to other donors.

Wright says she recovered well physically from losing a kidney but suffered anxiety, anger and depression when the organ failed to function in her sister.

"They had to bring her into surgery and remove the kidney," Wright says. "I was a crying mess. I called up the living donor coordinator at the hospital and she gave me all sorts of platitudes and said she'd call me back, but she never did."

The kidney was removed a week after the donation. A year later, she says, her sister received a kidney from a friend, which did work.

Wright says the consent form she signed at the Cleveland Clinic was "generic" and didn't mention all the specific risks of kidney donation.

"Nobody ever apologized to me," Wright says. "I felt abandoned and betrayed by the surgeons and the transplant center."

Cleveland Clinic offered this response to CNN: "We are committed to ensuring that patients undergoing treatment at our hospitals understand the risks and benefits of procedures. Conversations with patients are thoroughly documented in the patient's medical records. Patients meet with their physician and surgeon, patient educators, donor coordinators, social workers, donor advocates and others if needed for special circumstances. We regret that our patient's experience did not meet her expectations."

"The literature shows most people make the decision to donate without doing research," says Donna Luebke, a nurse practitioner who donated a kidney to her sister in 1994, and a former board member of the Organ Procurement Transplantation Network and the United Network for Organ Sharing.

"You need to be informed about the outcomes for your surgeon and your hospital. Educate yourself."

Luebke says you should ask many questions, including how many transplants of the type you're having the surgeon does per year, and what the short and long-term outcomes have been.

More than 6,000 living donations take place each year, according to HHS, usually among family members or close friends, and the transplants have saved hundreds of thousands of lives. Before becoming a living donor, here are some resources to check:

This sample consent form from the U.S. Department of Health and Human Services includes information on the risks of donating a lobe of your liver.

The National Kidney Foundation has information about the risks of donating a kidney.

The federal government keeps statistics on how many transplants have been done at individual hospitals,, so you can see how experienced a hospital is in a particular procedure.

From livingdonorsonline.org, you can find advice on how to prepare to become a living donor, an online message board to talk to more than 4,000 people who've donated an organ or are considering it and links to read other donors' experiences.

The United Network for Organ Sharing also has information for potential living donors.

The National Living Donor Assistance Center offers videos that feature kidney and liver donors and expert advice on what to expect when donating an organ.

Livingdonor101 has a list of questions you should ask before becoming a living organ donor from someone who herself has donated an organ.