What drives a mom to kill? 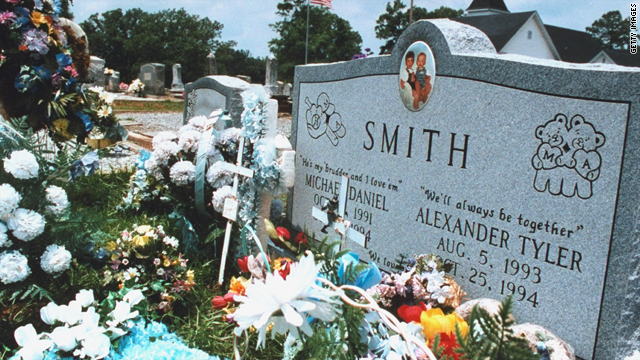 In 1994, the bodies of Susan Smith's two young sons were found strapped in their car seats in Smith's car.
STORY HIGHLIGHTS

(CNN) -- Unemployment. Single parenthood. Taking care of multiple young children. Millions of people deal with these challenges every day, but in some cases, they add up to something unthinkable: turning against one's own child.

Shaquan Duley, 29, an unemployed mother from Orangeburg, South Carolina, is facing two counts of murder after police say she killed her own two children. She made her first courtroom appearance Wednesday and entered no plea during the brief hearing.

Authorities said Duley suffocated the toddlers, ages 1 and 2, with her bare hands and then strapped them into car seats and submerged the car in a river. The night before, she'd argued with her own mother, with whom she lives, Orangeburg County Sheriff Larry Williams said. He said Tuesday that Duley is unemployed, and authorities have not located the children's father.

IF YOU'RE ON THE EDGE
If you're feeling depressed, overwhelmed, stressed or psychotic, it's important to get help as soon as possible. Here are some tips from Emory University's Nadine Kaslow:

1. Make use of community mental health services. Contact an organization like the National Alliance on Mental Illness. Religious groups may also be able to help find resources.

2. Turn to your social support network. Expand that network as widely as you can -- friends, family, religious leaders or people in your work environment.

3. If you feel that you might harm your children, leave them with someone who can keep them safe.

4. Some single moms swap child care -- a trusted friend will take your kids for the evening while you relax, in exchange for you doing the same for her.

5. Let your primary care doctor know how you're feeling.

The reported argument with her mother probably didn't cause Duley to act out against her own children, but it could have been the breaking point after a long period of stress, said Nadine Kaslow, psychologist at Emory University, who has not treated Duley.

Filicide, the act of a parent killing his or her own child, is rare but not unheard of, says Carter Hay, associate professor of criminology and criminal justice at Florida State University.

In 2008, there were 559 homicide victims in the United States ages 4 and younger, according to the most recent statistics from the U.S. Department of Justice. Hay estimates that the perpetrator was a parent in about 350 of such cases every year.

Cheryl Meyer, a psychologist at Wright State University in Ohio and co-author of several books on the subject, said it's probable that a mother kills a child somewhere in the U.S. once every three days.

One common trait among women who do not follow through on such harmful impulses is positive social support, she said. But many women are afraid of seeking help because they are afraid of being ostracized or accused of bad parenting.

The first year of life of a child is the riskiest for a mother when it comes to committing filicide, Hay said. Postpartum depression is a possibility during this period, and the general stress of raising a child is heightened, he said. The risk goes down substantially after the child turns 1, he said.

The Duley case has echoes of another South Carolina case: In 1994, the bodies of Susan Smith's two young sons, ages 3 and 14 months, were found strapped in their car seats in Smith's car.

Video: Why do parents kill their kids?

She at first told authorities her children had been kidnapped but then admitted that she had strapped them into car seats and pushed her car into a lake. She was convicted of murder and sentenced to life in prison.

In another notorious case, Andrea Yates of Texas was found guilty of drowning her five children in the family bathtub in 2001. That conviction was later overturned, and she was sent to a state mental hospital.

Mothers who kill their children tend to fall into five categories, according to Meyer's research on dozens of cases: killing of a newborn, killing through abuse, being assisted or coerced by a partner, killing purposely and killing through neglect. The last category includes women who leave children in a bathtub or a hot car and come back to find them dead, Meyer said.

The Ohio psychologist says women who kill with purpose tend to be devoted mothers in their 30s who have suffered some kind of loss, and who murder all of their children at once by a violent means such as a knife or a gun. Those who kill by neglect tend to be younger and of lower socioeconomic status, who do not kill all of their children at the same time, and the cause of death is usually suffocation or smothering.

Authorities' description of Duley's case indicates that her situation is a blend of these two, Meyer said.

"It sounds like, that this is a woman who felt very inadequate as a parent, was under constant criticism from her own mother about her insufficient parenting," said Paula Bruce, clinical and forensic psychologist in Beverly Hills, California, who has not treated Duley. Duley may have tried to free herself from the failure of parenting, she said.

Many unanswered questions about Duley's mental health history would paint a clearer picture of what happened, Bruce said.

The vast majority of mothers who kill their children have a form of diagnosable mental illness, but most are not receiving appropriate treatment for it at the time of the murders, Kaslow said. A high number of them are economically underprivileged, she said, and they are commonly single, unemployed parents. They may have been the victims of trauma or abuse; this information is not known about Duley.

"Most women who kill their children have extreme personal problems or a lot of stress in their lives," Kaslow said.

In many cases, mothers who turn against their own children have chronic depression, Bruce said. Continual feelings of insufficiency and unexpressed anger can build up over time; killing one's own children is the "ultimate expression of rage," she said.

This kind of behavior can also point to borderline personality disorder, a condition marked by impulsive behaviors and instability of moods and emotions, Bruce said. People with this condition have unstable relationships because they go from one extreme to another, treating people with admiration and love but then quickly directing intense anger toward them.

In some cases of filicide, the mother is unable to think about the experience of the child and can focus only on her own feelings of pleasure or distress, Bruce said.

Many women whom Meyer interviewed in prison expressed deep remorse about having killed their children.

"Most of them said things like, 'I think about this every day; there's nothing that anybody could do to me that's worse than what I do to myself.' "

If you have disturbing thoughts that interrupt your daily functioning, seeking help is crucial, experts say. Pediatricians and other doctors who are seeing new mothers should be asking about women's emotional health and whether they have any feelings of inciting violence, Hay said.

"The most surprising to all of us was, not only were these people not monsters at all but how much we just looked at them and said, 'This could have been us,' " Meyer said. "Had we made one different decision, we could have been them."